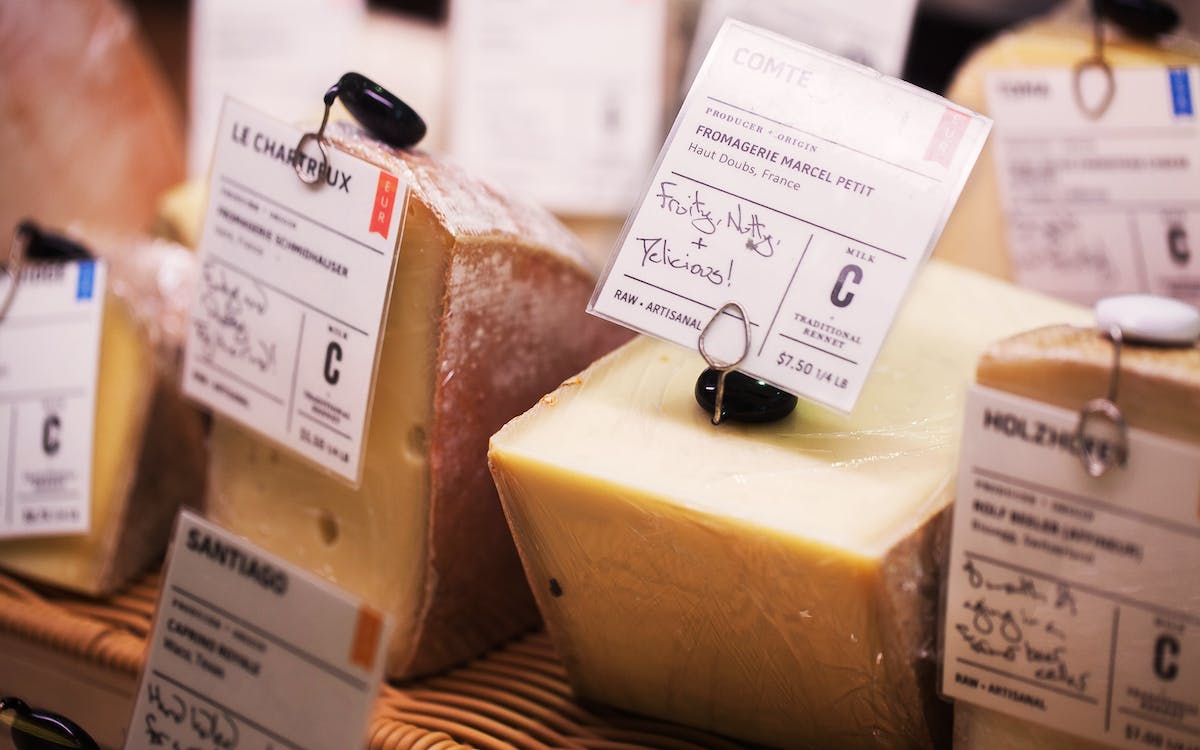 Peering into the cheese case at Scardello in Dallas’s Oak Lawn neighborhood, it’s hard to know where to begin. There’s everything from goat to gouda, cave-aged cheddar to creamy Brie, stinky blue to even some varieties made from water buffalo milk. The big wheels and little bundles have come from around the world, the country, and the state. It would be a little overwhelming if not for the guiding presence of Rich Rogers, Scardello’s owner.

Rogers grew up in Dalhart, a tiny town at the tip of the Panhandle, where he says “the fanciest cheese was out of a squirt can.” Today, he’s one of the most knowledgeable cheesemongers in the state, if not the country. For nearly a decade, Rogers has served on the judging and competition committee for the American Cheese Society’s annual awards, the largest competition of its kind for American-made cheeses. Over the years, as more and more Texans have taken home awards, Rogers has watched others realize a truth he already knew: Texas has standout cheese.

The key to great cheese is great milk. Currently, Texas​​ has 378 producer dairy farms and is among the top five dairy-producing states in the country. While some cheesemakers double as dairy farmers and harvest their own milk, others rely on outside sources. When one dairy closes, it can significantly impact production and take cheesemakers months or even years to find a suitable replacement.

Last May, new statewide rules made it easier for dairies to distribute raw milk, a move that many cheesemakers (who produce the cheese) and mongers (who sell the cheese) supported because it opened up a new revenue stream for dairies.

“There were several cheesemakers who were part of the effort to change the rules regarding raw milk sales,” says Judith McGeary, executive director of the Farm and Ranch Freedom Alliance, which lobbied for the changes. “They took part because they want to see dairy farmers succeed, and they know that retail sales of raw milk can be a vital way for dairy farmers to make a fair living . . . The new rules will indirectly help cheesemakers, by supporting the continued existence and hopefully new establishment of small, high-quality dairies who can choose to also get a producer’s license and sell their milk to cheesemakers as well as consumers.”

According to the Texas Department of State Health Services, there are 54 facilities with a milk-for-manufacturing permit, the permit required to make cheese from scratch. (This does not apply to anyone who buys cheese and then smokes it or adds flavor to create a new product.) This number is on par with the number of cheesemakers in Vermont. And yet Texas cheeses do not enjoy the same level of nationwide consumer recognition.

Cheese experts around the state have different explanations as to why that is. Some states, like California and Wisconsin, offer more governmental support and have dairy marketing boards that use a certain percentage of sales to help market cheeses. Distribution is also difficult, especially for smaller cheesemakers in remote locations that struggle to safely transport their cheeses at a reasonable cost. But Texas does have several things going for it, including lots of land and warmer temperatures.

In the Northeast and Europe, many milk-producing animals head indoors and subsist on hay during the winter months, but Texas animals are able to graze outside year-round. This makes for a cheese that is more consistent in color and taste and also makes Texas an attractive locale for dairy farmers and big cheese manufacturers. Earlier this year, Ohio-based Great Lakes Cheese broke ground on a new, state-of-the-art facility in Abilene and the world’s largest manufacturer of mozzarella, Leprino Foods, announced it will open a new facility in Lubbock in 2025.

“The decision to locate our newest facility in Lubbock was based on a number of factors, such as a reliable milk supply, which is essential to the placement of a new facility of this size, a well-educated workforce, and a top engineering school in Texas Tech University, which we plan to partner with in the future,” said a press representative for Leprino.

Big Cheese may have just started to take notice, but several smaller makers have called Texas home for decades. Back at Scardello, Rogers cuts me off a chunk of Queso Menonina, one company’s take on queso menonita, a cow’s milk cheese named for Mennonites who moved to Mexico and started making cheese. This version is flecked with jalapeños, and I expect it to be spicy, tongue-numbing even, but it surprises me. You can clearly taste the jalapeño but the creaminess of the cheese shines through.

“When I’m looking at flavored cheeses, one of my biggest criteria is balance, because I don’t want it to just be overwhelmingly the [added] flavor,” Rogers tells me. Next, he pulls out the Hoja Santa, a goat cheese wrapped in Mexican pepperleaf. This one’s flavor profile is harder to decipher, but Rogers gives me a hint: sarsaparilla.

While both of these cheeses are Mexican-influenced, they’re actually made at Mozzarella Company, just a few miles away from Scardello in Deep Ellum. Below the big, bold letters of the sign out front, there’s a picture of a smiling, older woman with a white bob and red glasses. It’s Paula Lambert, one of America’s artisanal cheese pioneers. Lambert grew up in Fort Worth but spent five years in Italy, studying Italian and art history. In 1973, she returned to Texas and got married, but she missed Italy. Opening a cheese factory was her way of coping.

“I had loved fresh mozzarella when I lived in Italy and back home no one had even heard of an insalata caprese—a mozzarella and tomato salad—and I thought that they oughta know about it,” Lambert says, laughing. “I’ve been in the cheese business ever since.”

While Lambert’s operation has grown substantially over the past four decades (her cheeses are sold at major grocery stores across Texas, Louisiana, and Arkansas) and she’s branched out beyond mozzarella to make other varieties like an aged blue and a Texas version of Monterey Jack, her methods are still largely the same. “[Our cheese] has been made by hand from fresh, local milk since 1982,” Lambert says. “We are considered a big cheese factory, but we are completely artisanal. We have no machines other than a couple of pumps and a pasteurizer.”

As a result, Mozzarella Company has racked up nearly 150 awards, making Lambert arguably the most decorated cheesemaker in Texas. So she’s not scared of a little competition. In fact, she welcomes it. “It’s a gigantic world out there and there’s room for everybody,” she says.

Case in point: the number of goat-cheese makers across the state that have managed to support one another while also making names for themselves. Laura and Jeff Vanderbilt started making goat cheese in their fifties, after Laura visited her future son-in-law at Haute Goat Creamery, then located in Lubbock.

“The minute I walked into that small cheese-making room, I just fell in love with the smell. I was hooked,” Laura says. “Three years later, when I found out the owner was selling the equipment, we bought it [and the name].”

Knowing next to nothing about cheese-making, Laura spent the next two years immersed in classes, books, and hours of conversation with other producers. Amelia Sweethardt of Pure Luck Farm & Dairy became the couple’s mentor. Now the Vanderbilts are known for their flavored chèvres and are happy to share their knowledge with anyone who walks through the door of their White Oak shop.

It’s easy for Texas cheese makers to have this “pay it forward” mentality because they know they’re not necessarily in direct competition—they serve different customers, with tastes as varied as the cheeses. A plain goat cheese made by Marfa Maid Dairy in West Texas can have a distinctly different tang than a plain goat cheese made by the Vanderbilts some 650 miles away. And a lot of that has to do with the terrain.

“Cheesemakers [often] call themselves grass farmers because really, the makeup of their pasture has so much to do with the quality of the milk that they get,” says Lindsey Schechter, owner of Houston Dairymaids. When she opened her small cheese shop in 2006, she wanted to introduce Houstonians to artisanal cheeses, specifically those made with unpasteurized milk and, in accordance with a rule issued by the Food and Drug Administration in 1949, aged for over sixty days. Pasteurization—the process by which raw milk is heated in order to kill bacteria—for cheese-making has long been debated in the United States, and many cheese lovers, including Schechter, argue that raw milk is safe in cheese production and makes for better natural flavor.

“When you pasteurize you kind of create a blank slate. You lose a lot of the microorganisms that would create flavor in your cheese that come through the soil and are unique to your farm and dairy,” Schechter says.

Texas natives Chadley Hollas and Kathryn Ivey see great potential in their home state’s terroir, so much so that they decided to move back from Vermont, where Ivey was lead cheesemaker for an award-winning goat dairy, to open Cadence Creamery, scheduled to start selling products in 2022.

“​​We think Texas has the potential to develop its own cheese identity, unique from other cheese regions in the United States,” Ivey says. “As we’ve seen with the growth and recognition of Texas winemakers, brewers, and others, there is a culinary future here worth promoting.”

The couple is interested in exploring varieties specifically suited to the state, especially aged hard cheeses. Ivey and Hollas are also excited about the prospect of incorporating more of the sustainable practices they picked up back East and developing a robust herding program “unique to Texas but inspired by the world’s shepherds,” says Ivey.

“Goats, like Texas’s other native ruminants—deer, and bighorn sheep, depending on where you are referring to—have a great potential to help sustain Texas’s landscapes, especially as we adapt to a changing climate,” she says. The couple plans to work with local farmers to graze goats over large swaths of land, eliminating the need to buy up massive acreage.

Texas cheesemakers are innovating in other ways, too. Veldhuizen was the first to successfully experiment with raising sheep, researching breeds that would acclimate to the warmer climate, and finding a winner in the Asian Awassi. The company’s resulting Manchego-style Fat Tailed Tomme is one of Rogers’s favorite Texas cheeses. Then there’s the corporate lawyer turned rancher at OroBianco Italian Creamery who is working to expand beyond gelato to produce fresh mozzarella and burrata made from water buffalo milk. Some cheesemakers are producing vegan alternatives from cashews. Hill Country maker Nut Monkey popped up at local farmers’ markets last year, and since opening in 2020, Rebel Cheese—an all-vegan cheese shop and cafe in Austin—has earned national recognition for its Chebrie, a cheddar-Brie hybrid.

As for how cheese aficionados feel about vegan cheese? According to Rogers, it can be somewhat controversial.

“It really depends on how you define cheese. At the American Cheese Society, cheese is defined as being made from milk,” he says. “But I think non-dairy-based cheese substitutes are a fantastic innovation. And I’m glad that’s available for people that want or need it. It’s cool, just different.”

For now, Texas cheeses can mostly only be found inside state lines, and that’s what makes them special. Just don’t expect it to stay that way much longer.