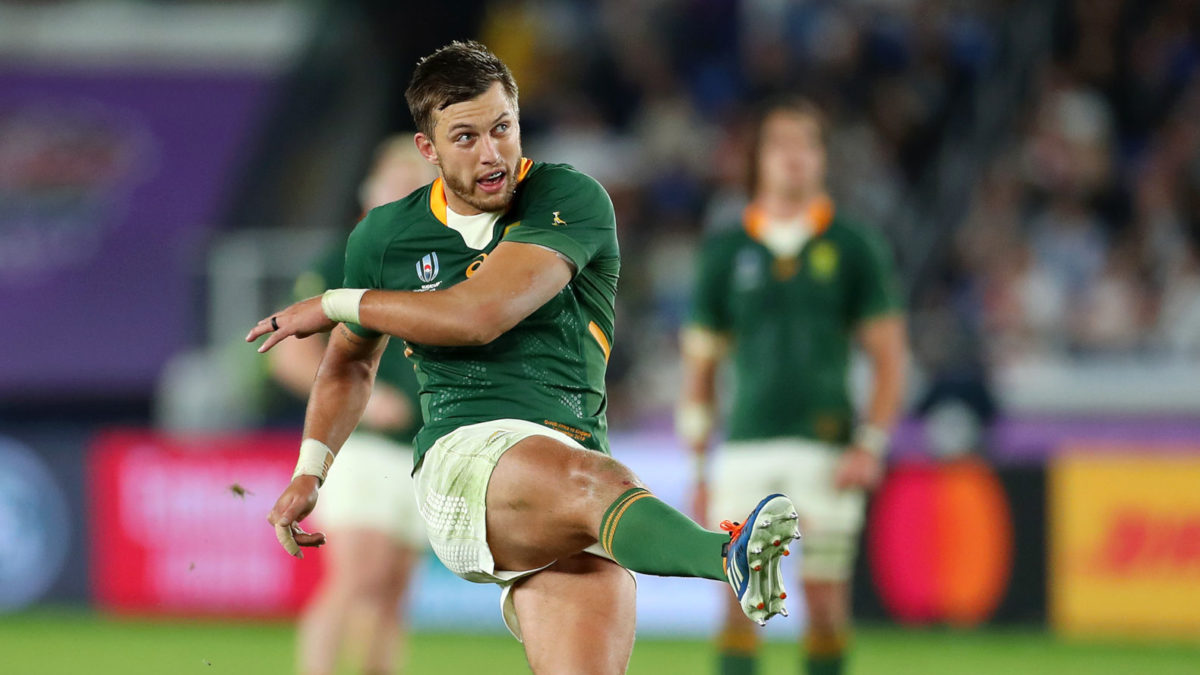 Stuart Hogg became a Scotland record holder after a double against South Africa, but the Springboks scored a 30-15 victory.

Hogg scored two tries to take him up to 24 for Scotland and join Tony Stanger and Ian Smith at the top of the all-time list.

Gregor Townsend’s side matched the Springboks for tries, with Makazole Mapimpi also crossing twice and the hosts led 10-8 at half-time at BT Murrayfield.

But the visitors’ control and physicality saw them comfortably win the penalty count and they kicked themselves out of sight in the final quarter of the Autumn Nations Series game.

Scotland had been looking to follow up victory over Australia last Sunday and Townsend made four changes, with Glasgow winger Rufus McLean handed a start and Leicester centre Matt Scott starting his first international since June 2017. Hamish Watson had dropped to the bench.

Scotland faced a difficult opening, not helped by early handling errors from Finn Russell and Hogg, and they conceded five penalties in the opening 11 minutes.

They fronted up to the physicality of the tourists though and stole a line-out on their five-metre line, before Duhan Van Der Merwe turned defence into attack in devastating fashion after another turnover.

However, South Africa turned the screw in the final quarter. Handre Pollard kicked two and Frans Steyn added one from long range to secure an ultimately comfortable away win.

Meanwhile, Argentina ended a seven-match losing run after accounting for Italy 37-16 in a willing contest.

A drought extended by coming up just short to France in Paris last weekend had the Pumas keen to disregard flashy thoughts and execute the basics. They did, and were rewarded with five mainly workmanlike tries to one.

Italy was full of intent but a developing side with only 224 caps (Argentina had 617) struggled with accuracy and fluidity and was too often its own enemy: It committed 20 turnovers.

And yet, it was in the match for more than 50 minutes at 24-16 down, with cries of “I-ta-li-a” ringing around Stadio Comunale di Monigo, until Argentina set itself, held possession and caught Italy short out right for an untouched Santiago Cordero to make it a relieving 29-16.

Into the last quarter, the Pumas stole a third lineout before adding a penalty by replacement flyhalf Nicolas Sanchez, and finished their eighth straight win against Italy with a rolling maul try by replacement hooker Facundo Bosch, seconds after he’d knocked on over the line from another rolling maul.

Italy lost for a 16th straight time since the 2019 Rugby World Cup, with Uruguay up next.

The way Argentina started, it looked like it would be a rout. They kicked out of their half, captain Julian Montoya bossed the breakdowns, and they were up 17-0 after 28 minutes.

An Italy 22 dropout was returned high by flyhalf Santiago Carreras, fullback Emiliano Boffelli caught it and offloaded to lock Marcos Kremer to run in.

Boffelli also converted a try by flanker Juan Martin Gonzalez. Italy flyhalf Paolo Garbisi knocked on, the Pumas countered, Jeronimo de la Fuente grubbered and Gonzalez toed on the ball which conveniently sat up for him on the tryline.

A couple of Garbisi penalties had Italy trailing 17-6 at the break, then 24-6 quickly after following Argentina’s best-looking try.

Italy was 24-6 down, but in a rare period when passes stuck, it produced a try from a quick tap penalty when scrumhalf Stephen Varney scored off a ruck. Garbisi added the extras and a penalty and, though tighthead prop Marco Riccioni was carried off with a knee injury, Italy and its fans were feeling hopeful again.