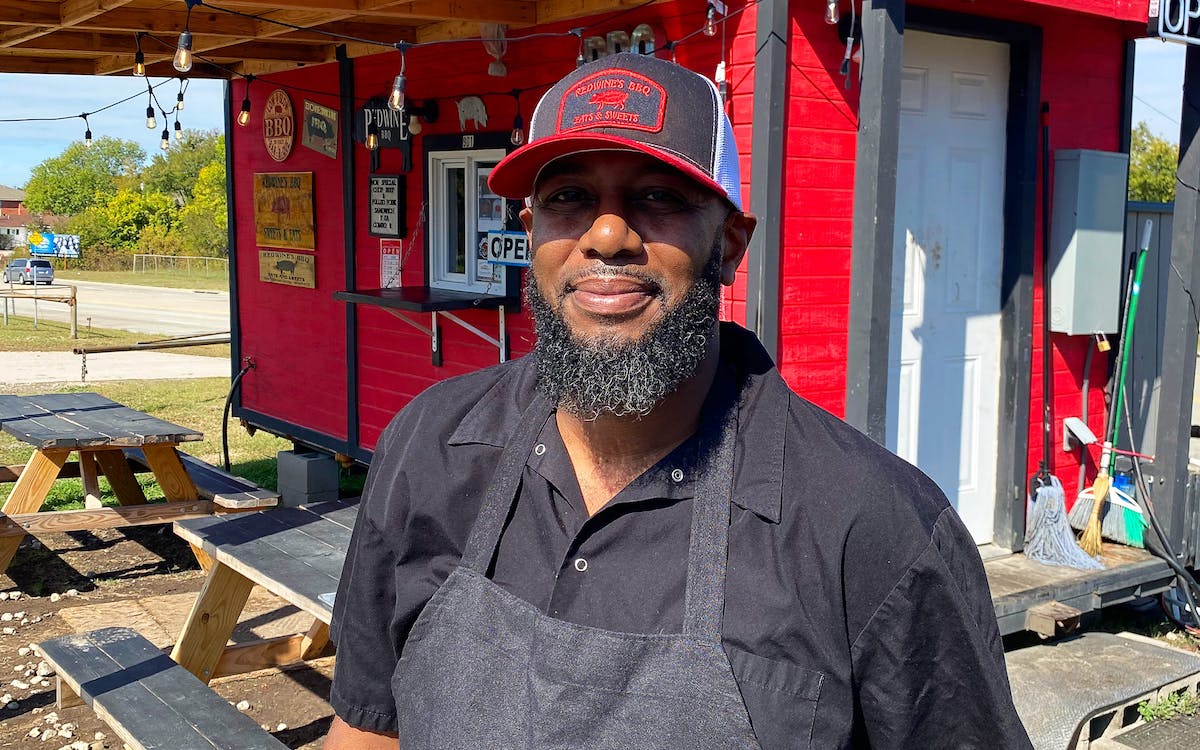 Family legacies can be complicated. Kenneth Redwine understood that when, shortly after his father John passed away in 2016, he hauled an unfinished barbecue food truck out from his late dad’s driveway and into his own. His father hadn’t taught him how to cook barbecue, but Kenneth felt like he needed to carry on the barbecue tradition. “I knew that was his dream,” Kenneth says. He taught himself to smoke meat, completed the food truck, and resigned from a corporate job selling Bang energy drinks. Redwine’s BBQ Eats & Sweets in Farmersville, an hour northeast of Dallas, celebrated one year in business last week.

Before he died, John Redwine had slowly built a barbecue business through catering jobs and local Farmersville events like Old Time Saturday. Kenneth’s job at the time made him unreachable most of the week, but he would help his father slice and serve the barbecue on Saturdays. No cooking lessons or barbecue tips were shared, but his father did eventually surrender one important family secret. Kenneth had asked him for his closely guarded barbecue sauce recipe, but John was reluctant. One night, he arrived at Kenneth’s house unannounced. They talked, and Kenneth remembers that “he grabbed a piece of paper and started writing something down, then got up and left.” It was the sauce recipe.

Eight years ago, a massive heart attack ended John’s barbecue dreams, and he was placed in a nursing home. Kenneth was determined to teach himself barbecue even if his father could no longer tend the fire. He read barbecue cookbooks and watched every television show about barbecue he could find. One Thanksgiving, he brought John home for a meal. He sliced some of his smoked brisket for his dad, who told him, “It’s okay.” That’s all Kenneth needed to hear. His father was a hard man to please, he says, so “that let me know that he liked it.”

When Old Time Saturday came around the following year, Kenneth’s sister Cynthia Craddock-Clark convinced him that they should run the barbecue booth their father no longer could. She made the desserts, Kenneth cooked the barbecue, and the venture was a hit. The Hay Loft, a local apparel and flower shop, invited them to sell out of the store during community events. Meanwhile, the siblings worked to complete the food truck that had sat on Kenneth’s property for years. Kenneth found a reverse-flow smoker named Big Baby on Facebook, and after reading a Texas Monthly article from 2014 about how to open a barbecue joint, he felt confident he could follow the steps.

Of the tips I shared in that article, the most important are to start small, build slowly, and don’t cook more meat than you can sell in a day. Kenneth followed the road map well, but he forgot the tip about charging his customers enough. When he opened, he offered a sampler plate of four meats and three sides for $20. His sister’s boss visited and told them that was “too cheap for the type of food you’re producing.” Thanks to that advice (and rising meat prices), that same platter is now $27, still a good value.

I was served sliced lean brisket on two visits, and both times it was tender, smoky, and impressively juicy for Choice grade beef. The ribs were less consistent. On my first visit, they had a pleasing mahogany color with a slightly sweet, peppery rub. On another trip they were much darker and smokier than I would have liked. (Kenneth blamed the additional smoke on his need to multitask while running the smoker.)

Like his father before him, Kenneth uses straight hickory wood. He had mixed in pecan wood for a personal touch, but nixed it after some customers said they were allergic to pecan smoke. Craddock-Clark makes all the desserts (try the massive slab of chocolate sheet cake) and helps him finish out the day’s service after she gets off from her day job, but he’s one-man operation most of the day. Then he hauls the smoker home and tends the briskets overnight.

All the sides are made from scratch, including traditional options like slaw and pinto beans. The potato salad is a Texas classic, with plenty of yellow mustard and pickle relish. On Fridays and Saturdays Kenneth adds smoked mac and cheese to the lineup, as well as jalapeños stuffed with cream cheese and chopped brisket and wrapped in crisp, smoky bacon.

Juicy smoked sausage is also on offer, but I was more impressed with the pulled pork. Tender ribbons of pork glistened on my fork, and were even better on a griddled bun with slaw for $7. Feel free to pour on that secret sauce. It’s not too thick, with a glossy brick-red color and a smell reminiscent of apple butter. It’s got bite from vinegar and spice that’s tamed by a sweetener I would guess is molasses.

Redwine’s is open Tuesday through Saturday, but that doesn’t mean Redwine himself gets two days off. He cleans out the pit every Sunday, and I talked with him on a Monday between his third and fourth supply-gathering stops of the day. He’ll be looking for an employee to help out once he’s bringing in enough cash flow. He says he’s close, and is on pace to meet his goal of getting into a brick-and-mortar by year three. He thinks that would make his father proud. “I look at it as an extension of what he wanted to do,” Kenneth says. But even now, without a building or any full-time help, he has already expanded on the family legacy.