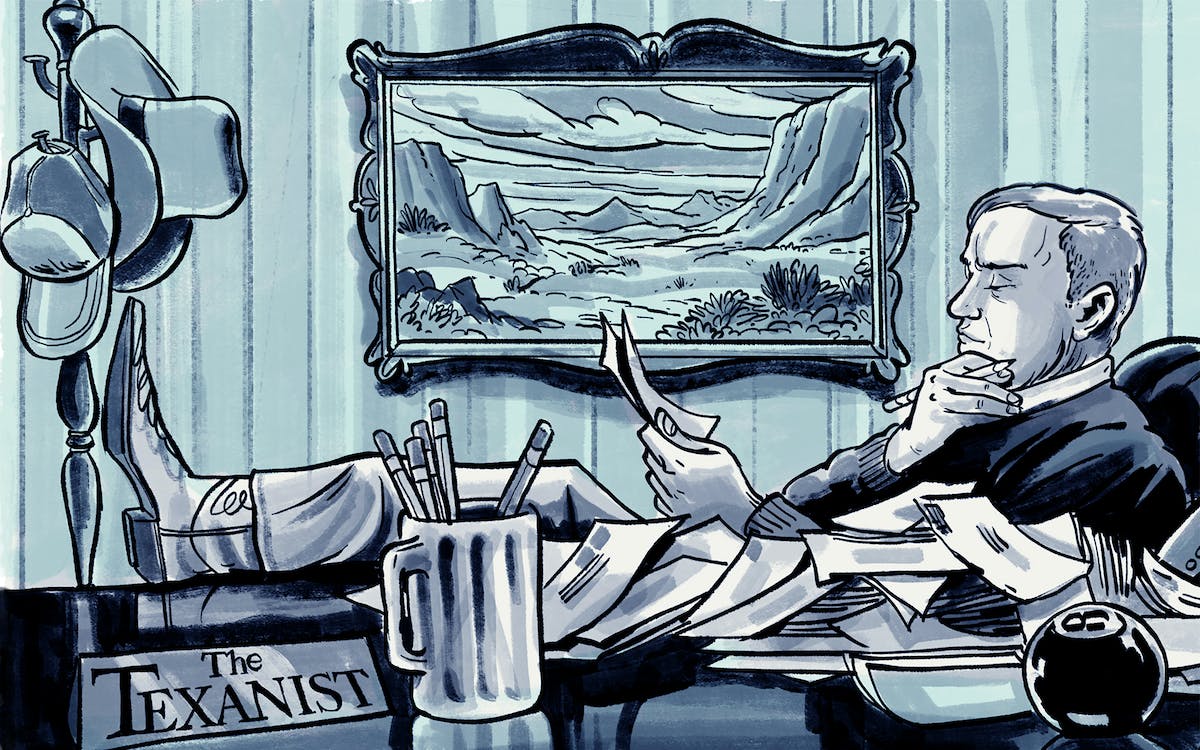 Q: I recently learned that San Antonio is home to wild parrots. I’m 68 years old, have lived in San Antonio my whole life, and just spotted one of the bright green beauties for the first time. Are these colorful birds new to Texas or are they native and I’ve just somehow been in the dark all this time?

A: The Texanist never ceases to be amazed by the zoological wonderland that is his home state. From the beloved armadillo to the despised zebra mussel, the astounding array of fauna that roam the wilds of Texas boasts so many magnificent creatures. There’s anoles and alligators, and badgers and beavers. And cougars and coyotes, and deer and diamondbacks, and eastern fox squirrels and earthworms, and feral hogs and foxes, and gaspergous and geckos and, well, a whole bunch of other critters, including, of course, many, many birds.

In fact, according to a list compiled by the Texas Ornithological Society’s Texas Bird Records Committee, some 650 species of birds have been spotted in Texas at one time or another, which is why the state is a much-favored destination for birders the world over. Among these many feathered friends (note: the Texanist detests grackles and is not friends with them), there are winter residents (think Canadian geese), summer residents (painted buntings come to mind), permanent residents (including northern mockingbirds, our state bird), freak accidents (remember the African flamingo that escaped the Wichita, Kansas, zoo sixteen years ago and has made occasional surprise appearances on the Texas coast?), and interloping invasives, such as the bright green parrot that is the focus of this letter.

Specifically, we’re talking about the monk parakeet, or Quaker parrot, as they are sometimes known. With that eye-catching shade of parroty green, the brilliant blue flourishes on the wingtips, and bright orange beaks, they really are something to see. Monk parakeets also have a greyish belly and face, which gives them the appearance of hooded monks and explains the name. These flamboyant fowl, to answer the question, Ms. Goode, are not native to Texas; they began to arrive from South America—by the tens of thousands—as pets during the 1960s and 1970s.

As a result of accidental escapes and intentional releases over the years, monk parakeets soon found themselves loosed in a strange new home, and it hasn’t take long for them to settle in. They are now known to reside in a number of Texas cities, including not just San Antonio but Austin, Dallas, Houston, Brownsville, Corpus Christi, and Jacksonville, among a few other locales.

The Texanist reached out to Cliff Shackelford, who has, since 1997, been Texas Parks and Wildlife’s official nongame ornithologist, and is also the East Texas–based host of public radio’s long-running Bird Calls call-in show.

Shackelford tells the Texanist that in their native temperate South American range, the monks prefer to nest in savannas with occasional tall trees. But here in Texas they prefer power poles in open areas like parking lots or along roadsides, or light poles at sports fields. Shackelford figures this probably reflects their fondness for the openness of a savanna.

Asked whether Texans should welcome the monks’ presence or not, Shackelford tells the Texanist that their effect is “fairly neutral, though many citizens, whether birdwatchers or not, enjoy seeing a flash of green and hearing their loud screech as they whiz by.” But Shackelford also says early predictions were not quite so rosy. The thought, he explains, was that the birds would multiply and cause all sorts of problems, gobbling up crops and whatnot. “None of that has happened,” he says. “The bird is strictly urban and the biggest nuisance is from their large stick nests, which are roughly the size of a refrigerator, placed in those power poles, light poles, etc. Thus, electric providers have the most challenges with this species.”

Shackelford himself is quite fond of monk parakeets, though he believes these birds are at their best in their native range. “It’s never a good idea to release a pet freely into the wild,” he says. “There are so many bad and costly examples of releasing non-native species into Texas, including free-roaming cats, red imported fire ants, giant salvinia, feral hogs, Chinese tallow, and zebra mussels, etc., etc.” The Texanist wondered about invasive Californians, which elicited a chuckle from Shackelford. “The list of introduced plants and animals in Texas is very long and, in many cases, they can be ecological disasters. Luckily, the parakeet is not.”

Austin, where the Texanist roosts, boasts a good-sized population of monk parakeets and he encounters them often. They’re noted for being “talkative” (in captivity they can be trained to speak), sociable, and feisty, behavior the Texanist has observed with his own eyes. Additionally, these flamboyant new Texans are known to occasionally pick fights with grackles, the mere thought of which puts a smile on the Texanist’s face. No doubt the rotten grackles had it coming.

The Texanist, like Shackelford, thinks the monk parakeets are great. He’s even of the mind that they’re a mostly welcome addition to Texas’s colorful animal kingdom. Save for the occasional power disruption, which can be an actual problem, they haven’t plagued the state with anything close to the havoc caused by fire ants or zebra mussels or Californians. Plus, they seem to possess a number of the very same traits—conviviality, garrulousness, and occasional prickliness—that natural-born Texans are themselves known for.

Next time you’re lucky enough to see one of these colorful new Texans, Ms. Goode, the Texanist suggests tipping your hat and offering a “howdy, neighbor.” And if that doesn’t elicit a response, you can always try a “Polly want a Frito?”

Thanks for the letter and happy birding.

Have a question for the Texanist? He’s always available here. Be sure to tell him where you’re from.