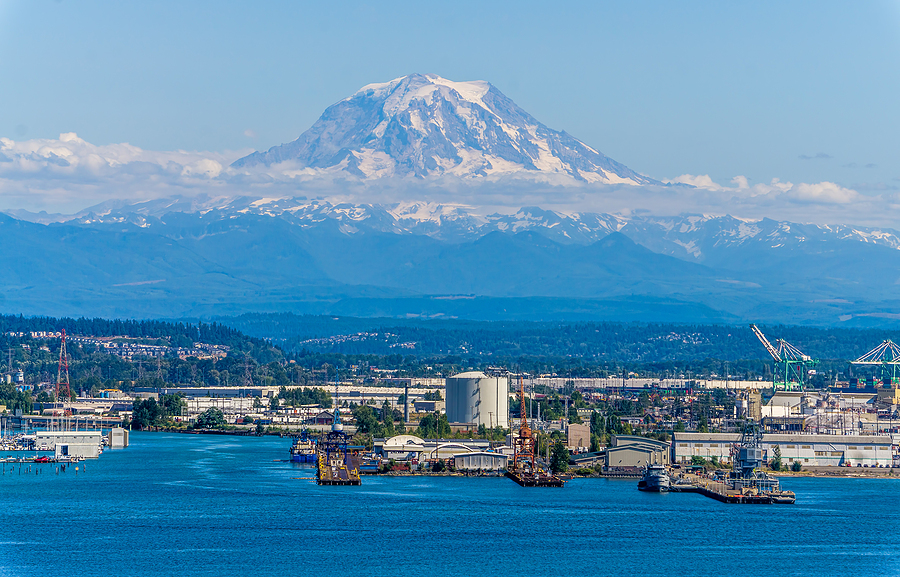 With the global supply chain in disarray and container ships moored in seldom-used Puget Sound anchorages, Washington Lieutenant Gov. Denny Heck signed a timely memorandum of understanding on Thursday with the government of Finland to build a so-called smart port in Tacoma as early as next year.

The initial step in this process, a feasibility study for a 5G edge computing network in the Tacoma Tideflats area, was first reported by South Sound Business on Sept. 15.

“Port congestion is a bottleneck for the whole world economy, so there’s a huge incentive right now to ensure that port operations are optimized,” Finnish Minister of Transport and Communications Timo Harakka told GeekWire. “We have several ports that already utilize 5G and advanced digital technology to operate their harbor operations in real time with their digital twin.”

Harakka is part of a trade delegation that will visit the Ports of Seattle and Tacoma as well as Amazon, Boeing, and Microsoft this week.

Finland’s largest port, HaminaKotka, is currently unloading cargo ships in half a day, far faster than clogged harbors elsewhere in the world. At the Ports of Seattle and Tacoma, it is currently “all hands on deck” to speed up shipments and deliveries.

“The Port of Tacoma and the Northwest Seaport Alliance (NWSA) are investing in new technologies to continually improve the efficiencies of our ports. Some 5G networks have already been deployed in the NWSA gateway and we’re furthering efforts with our ‘Port Community System’ that will help improve cargo movement across Seattle and Tacoma,” said Port of Tacoma Executive Director Eric Johnson and NWSA CEO John Wolfe in a joint statement.

The Finnish trade delegation includes nine companies with a focus on maritime technology. “We are looking for solutions to logistics,” said Vesa Koivumaa, head of growth for Wärtsilä North America. “We have a digital just-in-time product so that ports can act more like airports with less waiting time.” (Koivumaa sits on the board of Maritime Blue, a public-private-non-profit alliance that promotes sustainable innovation in Washington’s maritime business sector.)

“Deepening the long-standing relationship between Finns and Washingtonians better prepares both our peoples for the task of overcoming the global challenges of the 21st century we will face together,” said Lt. Governor Heck, who is serving as Acting Governor while Gov. Jay Inslee is representing Washington at the COP26 United Nations Climate Change Conference in Glasgow.

Harakka kicked off the delegation’s trip on Thursday morning with a fireside breakfast chat at Seattle’s National Nordic Museum in conversation with Tuula Rytila, Microsoft’s corporate vice president for digital stores. In the wide-ranging conversation, Harakka touted Finland’s climate strategy for the ICT sector, part of the country’s broader national goal to become carbon neutral by 2035. His ministry later translated the document into English given the intense tech industry interest in the subject.

“I cannot imagine how we can achieve our ambitious climate targets without digitalization and datafication,” he said. “Big companies like Microsoft, Amazon, and Google have a key role to play.”

On the road to Microsoft’s pledge to become carbon negative by 2030, the Redmond, Wash.-based company is seeking out partnerships with public sector leaders on climate change like Finland. “If we don’t have accurate measurements, it’s really hard to hit the targets,” Rytila said.

Microsoft bought Finnish telecom company Nokia’s smartphone division in 2014 for $7 billion and maintains a Microsoft Mobile office outside Helsinki. The move under former Microsoft CEO Steve Ballmer was widely viewed as a failure and created an early hurdle for CEO Satya Nadella who retreated from the smartphone market just one year later. In 2019, the two companies paired up again to work on 5G rollout.