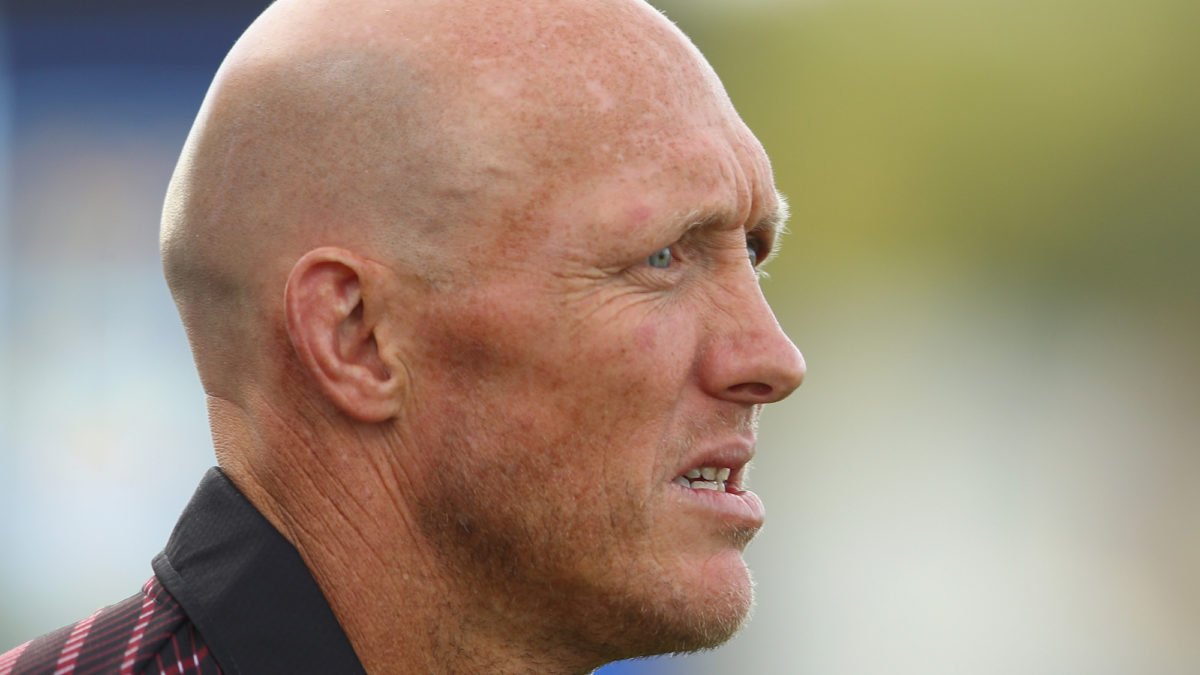 It seems that ever since Cronulla’s porch light was finally switched off after their long awaited maiden grand final victory in 2016, they have been bumping around in the dark, and failing to capitalise on that success.

Fifty years is a long time to wait to win your first premiership, and perhaps it was the relief of finally removing the monkey from their back that influenced how things have panned out for the club in the five years since they raised the Provan-Summons Trophy.

Yes, they made the finals for the four years after they won the title, but never really looked like serious contenders to make it to another grand final.

Their best effort was in 2018 when they finished fourth on the ladder before being eliminated in the preliminary final by Melbourne. 2017, 2019 and 2020 all saw top-eight finishes, but the Sharks were eliminated in week one of the finals each time.

Off-field dramas didn’t help their cause either. Star player Ben Barba was released from the club at the end of 2016 after testing positive to cocaine, and he was soon followed out the door by club chairman Damian Keogh for the same reason.

Previously reinstated premiership-winning coach Shane Flanagan was then de-registered in December 2018 for his past sins and was replaced on the clipboard by John Morris. Fast forward to the 2021 season and Morris was gone after Round 5, replaced by a caretaker coach in Josh Hannay.

2021 was the first season that the club missed the finals since 2014, when they won the wooden spoon, but it wasn’t as bad as all that, particularly given the coaching issues, injuries to key players, and some salary cap disasters.

In the end the Sharks ended up just missing the semi-finals on for and against, and one more win for the season would have seen them sneak in to eighth place on the ladder.

Given that they lost seven games out of a total of 14 losses for the season by eight points or less, they really weren’t that far away.

Unlike some clubs, the Sharks weren’t happy to settle in for any more mediocrity, and they got busy to ensure that their future would look brighter than their recent past.

It was a big, and somewhat controversial, call to sack the popular John Morris as coach after just five rounds in 2021, and then appoint a rookie coach in Craig Fitzgibbon as his replacement for three years from 2022, but they backed themselves and made the hard call.

Some fans saw it as unnecessarily sacrificing the 2021 season for possible future success, and maybe they were right.

But caretaker coach Josh Hannay proved his quality by keeping the squad together and playing for each other, giving some up and coming players a chance to shine in the top grade, and almost getting the team to the finals.

He handed the team over to the new coach in the best shape possible. So let’s look at what the Sharks have done to get themselves back on track next year.

Coach
Craig Fitzgibbon has looked like the best coach in waiting for some years, after spending considerable time as an understudy to both Trent Robinson at the Roosters and Brad Fittler at NSW.

He rejected offers from St George Illawarra and others to jump ship early from his Roosters role, and that probably says as much about his belief in honouring contracts as it does about not wanting to take on the impossible.

At the age of 44, Fitzgibbon is both old enough to command respect from his players, and young enough to be able to connect with them.

He also brings with him an incredible resume as a player, including 19 Tests for Australia, 11 Origins for NSW, 308 first grade games with nearly 1700 points.

He is a premiership winner, World Club Challenge winner, Clive Churchill medallist in 2002, and captain of the Roosters. So he knows what it takes, and his players won’t be able to second guess him.

Fitzgibbon was a smart player who gave 100 per cent in every game and I expect him to bring that level of intelligence and commitment to his coaching role. He’s also going to be well supported.

The impressive Josh Hannay and his assistant last year in Daniel Holdsworth will stay on and will add a level of continuity between seasons 2021 and 2022.

Also, Steve Price, who went from assistant coach under Wayne Bennett at St George Illawarra in 2010 to 2019 Challenge Cup-winning coach with Warrington in the Super League, joins them in an assistant coaching role.

Salary-cap clean-out
For some time, the Sharks have been hampered by having a large chunk of their salary cap dollars going into the pockets of some overpaid and poorly performing players.

Fortunately, the gravy train has now come to a sudden halt, and the likes of Josh Dugan, Shaun Johnson, Chad Townsend and Aaron Woods have all left the club, while Matt Moylan has been re-signed for 2022 on a significantly reduced contract.

Their only remaining salary-cap problems are Andrew Fifita, who may or may not make it back onto the field next year following his horrendous throat injury last season, and Wade Graham, who hasn’t played since Round 14 after suffering back-to-back concussions.

While it would be great to see both Graham and Fifita make their way back onto the field, perhaps the Sharks may look at the medical retirement option. After all, it’s been approved in far less deserving cases in the past.

Recruitment
Cleaning up their salary cap has allowed the club to invest in some new talent, but unlike some clubs, they haven’t gone overboard and tried to sign every player that came their way.

In fact, Cronulla’s 2022 recruitment can best be described as quality over quantity. There are just four key recruits so far, and a couple of depth signings. Let’s take a look at the key signings.

Background: Finucane has played five Origins for NSW and 218 first grade games for the Canterbury Bulldogs and Melbourne and was the Melbourne co-captain last year.

Opinion: Finucane is one of the most highly respected players in the game, not just for his skill, toughness and work ethic, but also for his leadership qualities both on and off the field, and the character of the man.

He was in career-best form last season, and after seven years with the Storm and two premierships, he knows what it takes to be successful.

Background: Hynes has played 36 games for Melbourne, and after spending most of his time coming off the bench in 2020, he had a breakout season in 2021. That was particularly when called upon to fill in for the injured Ryan Papenhuyzen.

He was even on the verge of Origin selection for NSW. By season’s end, he was genuinely challenging the brilliant Papenhuyzen for his first grade position.

Opinion: Hynes is somewhat a late bloomer and a rare talent who displays a lot of maturity in his game.

A versatile player, he is both a great ball runner and a player who can set up his outside men. He’s also a solid goal kicker with a success rate of around 77 per cent.

Background: McInnes has played 130 first grade games for both South Sydney and St George Illawarra and has been close to Origin selection for NSW.

Opinion: Like Finucane, McInnes is a player’s player. He’s the type of guy you want to have beside you when the going gets tough and you know he just won’t give up.

McInnes is a tireless defender, runs the ball well, has good vison, and is a natural leader.

Background: Ikuvalu scored 25 tries in 38 games for the Roosters, where he was mainly used as a back-up wing option.

Opinion: Ikuvalu is a strong winger with good pace who knows both the way to the line and what to do when he gets there. He is also a good defender, works hard bringing the ball back and is a tough competitor.

Yes, he has the occasional mistake in him, but I put that down to the fact that he is always prepared to get involved rather than sitting safely on his wing.

New coach Fitzgibbon has had a close involvement with Ikuvalu over the last few years and must have liked what he saw.

Squad
There’s a lot to like about the Sharks’ squad, but what stands out to me is both its depth and its versatility.

They have a lot of players who can perform well in more than one position, and most importantly, they have multiple strong options for their spine positions. Better than most clubs actually.

On top of that, they have some big boppers up front, hard-working back rowers, and pace out wide.

They also have an excellent leadership group with last year’s captain Wade Graham being joined this year by both Dale Finucane and Cameron McInnes.

This is how the squad shapes up at the moment, noting the players’ most likely positions:

There’s still one or two places to finalise for 2022, and the injury issues for both Andrew Fifita and Wade Graham are yet to be resolved, so there could be more news to come yet for the Sharks on the recruitment front.

Prediction
All said and done, and provided they don’t have more than their fair share of injuries, I can’t see the Sharks finishing any lower than sixth in 2022.

The new coach, a year of stability, the roster clean-out, the potential return to Shark Park, and the recruitment of some quality players all point to a much better season for Cronulla next year.

They won’t be losing games by half a dozen points next year, and who knows how far they can go.