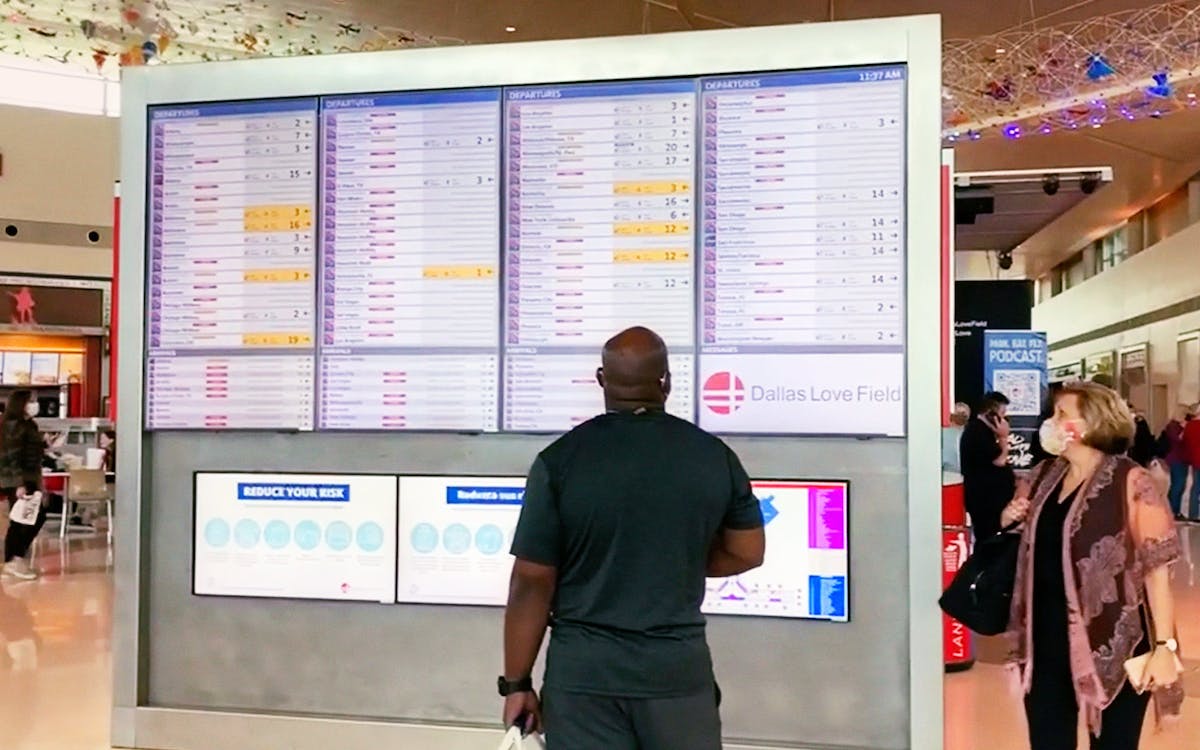 When winds gusted up to nearly sixty miles per hour at Dallas–Fort Worth International Airport just before Halloween, American Airlines canceled dozens of flights. Then it canceled dozens and dozens more. Not just at DFW, but also in Tampa and Philadelphia, where the winds were calm and skies were clear, and American Airlines flights were still being canceled this week because, the carrier said, of the high winds last week. Similarly, when storms hit Jacksonville, Florida, ahead of Columbus Day, Southwest Airlines canceled flights not just in Jacksonville but also in sunny San Diego. Combined, the two Texas carriers spent the two holiday weekends grounding more than four thousand flights across the country and delaying hundreds more takeoffs.

How can such a massive cascade of delays and cancellations happen nationwide because of limited events in one area? And how can they happen to just one airline while others continue taking to the skies? Some observers theorized that something more than thunderstorms and high winds was to blame. Senator Ted Cruz and Congressman Chip Roy, whose district includes parts of Austin, both suggested Southwest employees had walked off the job around Columbus Day to protest the airline’s vaccine mandate. “Joe Biden’s illegal vaccine mandate at work!” Cruz tweeted. Right-wing rabble-rousers surmised that the same kind of “sickout” happened at American over Halloween weekend.

Those rumors are wrong. Southwest and American, as well as Southwest’s pilots union, have forcefully denied that employees didn’t show up for duty because of the vaccines. But while vaccine mandates didn’t cause the terrible, no-good weekends at Southwest and American, the pandemic actually did. And it might continue to wreak havoc on both airlines as the busy holiday travel season approaches.

An isolated weather event doesn’t typically ripple through as much of an airline’s flight network as did the October incidents at Southwest and American. But nothing has been typical for airlines during the pandemic, and some of the changes both carriers made to cope with a devastating period for their industry left them especially vulnerable to a meltdown. Chief among those changes was a reduction in staffing.

Southwest had about 60,000 workers on the job before the pandemic, but has just about 54,000 today. In that same time, American’s workforce shrunk from nearly 134,000 to just 103,000. The job losses, which came mainly through voluntary furloughs and early-retirement packages, affected all types of workers at both companies, including pilots, flight attendants, and ground crews. Yi Goa, a professor of aviation management at Purdue University, says members of ground crews, such as baggage handlers, are proving hard to bring back. “People who lost work found wages elsewhere and may not want to come back,” he says.

That kind of short staffing is a problem across corporate America, and while both Southwest and American are working to bring back some employees, they’ve both asked existing workers to cover more ground—or sky—than before. In 2020, Southwest undertook the most aggressive single-year expansion in its fifty-year history, adding seventeen new destinations. Because business travel had all but evaporated during the pandemic, many of those new destinations were leisure-travel hot spots, such as Palm Springs. American underwent a similar expansion for similar reasons, as well as to make up for revenue losses in its much-larger international flight network that suffered from national quarantines. American added nonstop service to vacation-friendly destinations in the U.S. and Mexico, including Chetumal on Mexico’s Yucatán Peninsula. “People were interested in beach, sand, sun,” says Robert Mann, an aviation-industry veteran who heads the consulting firm R. W. Mann & Company. And yet, that expansion created its own problems. “American now has a bigger domestic network with fewer pilots to fly it,” Mann says.

That’s caused American’s pilots and other workers to argue that the company is stretching them too thin. In September, the American Airlines pilots union called for American’s flight operations managers to be removed from their jobs because, the union said, the managers were too often failing to match up pilots and planes, which led to many flight cancellations across the network.

Those same operations managers were sent scrambling when winds whipped across the runways at DFW last week. About 1,600 people work inside an $88 million, 149,000-square-foot, tornado-proof operations center in Fort Worth that serves as American’s mission control. When trouble hit in Dallas, shutting down runways and limiting the number of departing flights, American was unable to move flight crews from DFW to other destinations. That left operations managers trying to find reserve crews who could staff flights in other cities. They couldn’t find enough. The Associated Press reviewed internal American reports and found about two-thirds of the October 31 cancellations were due to a lack of flight attendants. The rest were because of a lack of pilots.

Because American uses DFW as a central hub, problems there spread across its system. On October 31, two days after the windy conditions began sparking cancellations in Dallas, American Airlines passengers found their flights canceled in other hubs, including Philadelphia, Charlotte, Los Angeles, and Miami. Those cancellations may have been preemptive—an attempt to reset the system by holding back on service until people and planes can get to where the passengers are waiting. But a reset like that also creates more cancellations, spreading out from hub cities to feeder airports. This past Monday, four days removed from the initial wind event, flight cancellations for airplanes arriving at LAX—1,200 miles from Dallas—were reported from places like El Paso, Denver, Austin, and Honolulu. The entire system was still plagued by what had happened in Texas days prior—all because the pilots and flight attendants who were supposed to be in place could not get there. Only an influx of employees, including 1,800 flight attendants who were off on leave and had just returned to their jobs on November 1, brought order back to the schedule. By then, 2,400 flights had been canceled over four days.

The collapse was similar to what happened to Southwest around Columbus Day. The two airlines have designed very different networks, with Southwest using a point-to-point or city-to-city model instead of American’s hub-and-spoke system. Still, Southwest’s problems occurred in the worst possible place—Florida. Reportedly, half of all Southwest’s planes touch down in the Sunshine State in any given day, and a quarter of its crew changes happen there. So when thunderstorms around Jacksonville and Orlando created delays on Friday, October 8, Southwest found itself further behind schedule than other airlines whose fleets aren’t as concentrated in Florida. Those delays compounded and became cancellations on Saturday, October 9, as Southwest tried to get planes and crews into the right places. By Monday, October 11, the cancellations had spread nationwide and reached 2,500 flights.

Southwest’s pilots, who work for a company long known for loving (or “luving”) its workforce, responded to that mess by making a similar claim of mismanagement of operations to the one American’s pilots had made a month earlier. Casey Murray, president of the Southwest Airlines Pilots Association, said in a statement that “our operation has become brittle and subject to massive failures under the slightest pressure,” adding that “frontline employees have endured continuous and unending disruptions” for months preceding the Columbus Day troubles.

One way to reinforce an airline’s operations is to keep more reserve crews on standby across the country. There’s complex math involved in doing that. Airlines decide months in advance where and when their planes will fly. Once the planes have been allocated, crews are assigned. Pilots and flight attendants typically place bids on the flights they want to work two months ahead of time and receive their assignments a month later. The resulting assignment schedule comprises crew hours for an entire month. The schedule also calls for reserve crew members to be on standby in case they’re needed to replace crew members who can’t make specific flights for any number of reasons, including federal limits on the number of hours crew members can be in the sky.

Because both Southwest and American don’t have their normal amount of reserves at the ready, it became much harder for them to reestablish normal operations after the recent weather disruptions, which Southwest freely admits. “We have a staffing margin that is much, much smaller than historic trends,” says Southwest spokesman Brad Hawkins. “When things go wrong, you quickly run through your reserves.”

But as one of the busiest seasons for flying—historically, anyway, but who knows in these variant-laden times—approaches, both Southwest and American say they’re hoping to do better. Southwest is doubling the number of reserve staffers through the end of the year and perhaps until the end of the pandemic, Hawkins says. American officials say the airline will continue adding flight attendants and that it will be fully staffed with flight attendants by December. That’s just in time for Christmas, but maybe too late for Thanksgiving. So, buckle up.