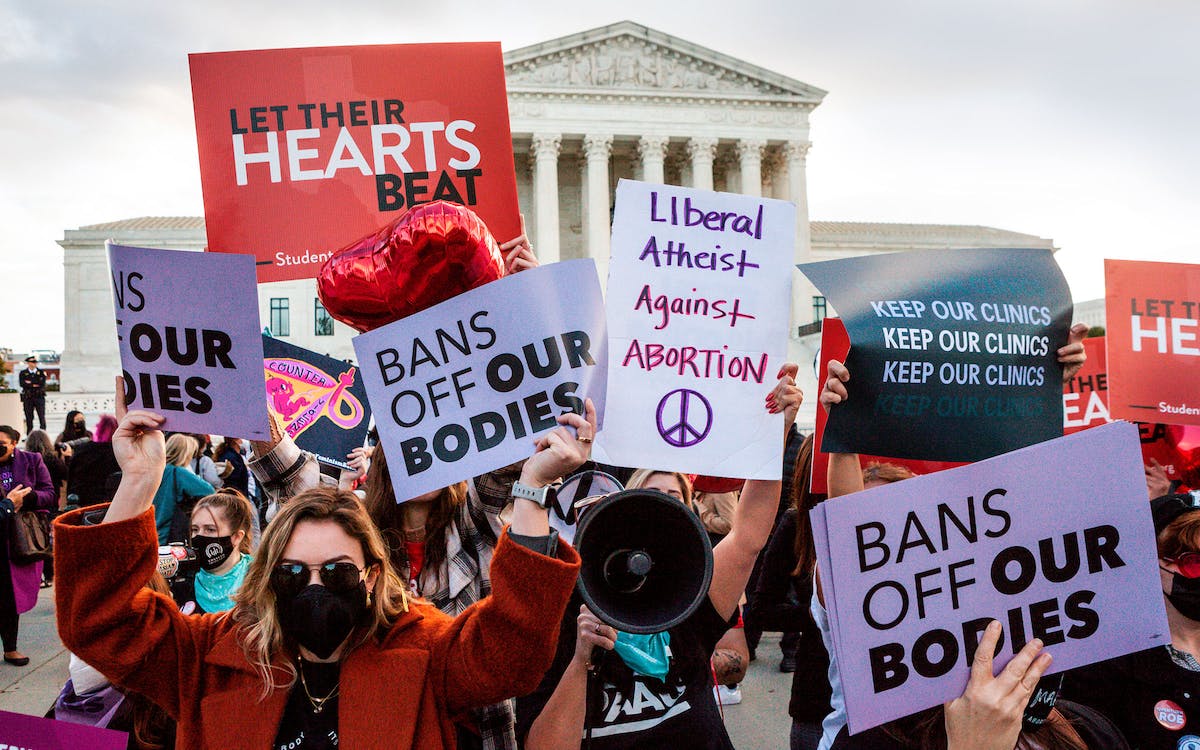 You might have expected that following the Supreme Court hearing this week would be helpful in understanding where Texas’s abortion law, and Texas women who wish to end their pregnancies, go from here. The controversial law, passed by the Legislature in May, restricts abortions after embryonic cardiac activity can be detected—typically around six weeks’ gestation, before many women know they’re pregnant—with no exceptions for rape or incest, and no consideration given to fetal viability. Since September, when the law took effect, it has been enforced by private citizens from across the U.S., who are empowered to sue anyone who facilitates the procedure, whether intentionally or not, and collect $10,000 for their trouble, along with attorneys’ fees, should they win their case.

The hearing before the Supreme Court on Monday represented something of a do-over. When the law took effect in September, the high court voted 5–4 to refuse to grant a preliminary injunction allowing Texas abortion clinics to continue operating while suits against the law proceeded. That decision did not sit well with the majority of Americans who still support access to safe, legal abortions as allowed since 1973 by the court’s decision in another Texas case, Roe v. Wade. In the aftermath of all the recent ruckus, the court agreed to hear from two plaintiffs, the federal government, represented by the U.S. Justice Department, and a group of abortion providers that includes Planned Parenthood. The plaintiffs were asking for reinstatement of a federal court ruling in October that clinics could continue operating while challenges to the legality of the law made their way through the courts.

For those unaccustomed to legal jargon, the hearing might as well have been in Urdu. It was thrilling to hear the voices of justices as they grilled the attorneys before them, but because there was no video, the proceedings sometimes felt like a distracting, guess-which-judge-is-talking parlor game.

Still, there was real drama in the three hours or so, especially, as reported breathlessly by some reporters, when a handful of justices went rogue (by the standards of Supreme Court justices). Yes, the court’s most conservative justices—Samuel Alito, Neil Gorsuch, and Clarence Thomas—were as stalwart as Stone Age boulders in their opposition to abortion. And the most liberal justices—Stephen Breyer, Elena Kagan, and Sonia Sotomayor—were equally clear about their desire to see the law struck down as an obvious violation of abortion rights established for 48 years under the precedent set by the Roe decision. Addressing whether the new Texas law has had “a chilling effect” on abortion access in Texas, Kagan stated curtly that, “Usually in these ‘chilling effect’ cases, we’re kind of guessing . . . Here we’re not guessing. We know exactly what has happened as a result of this law. It has chilled everybody on the ground.” The number of abortions in Texas dropped by about 50 percent in September compared with September of last year, according to the Texas Policy Evaluation Project, a group of university-based researchers who evaluate the impact of legislation on women’s reproductive health and services.

The big surprise of the hearing came when three conservative justices, Amy Coney Barrett, Brett Kavanaugh, and Chief Justice John Roberts, expressed doubts about the constitutionality of the Texas law. In particular, they indicated they found troubling the plaintiffs’ arguments that Texas can effectively ban abortion through private lawsuits even though the procedure is legal under U.S. law. “The questions the justices were really asking demonstrated that one of the issues is what this style of law, of enforcement, means not only to Texas at this moment but what it means for other constitutional rights,” explained Adriana Piñon, policy counsel and senior staff attorney for the American Civil Liberties Union of Texas, which has been involved in the fight against the new abortion law.

Maybe the conservative trio wouldn’t get too worked up over potential damage to causes such as gay marriage or voting rights, but Kavanaugh swiftly drew a parallel between the $10,000 “bounty,” as he put it, that could be awarded to abortion opponents and a hypothetical law in another state that “everyone who sells an AR-15 is liable for a million dollars to any citizen.” Beto O’Rourke, who did considerable damage to his future in Texas politics by stating during his 2020 presidential primary campaign that he was coming for Texans’ guns, couldn’t have raised a scarier alarm to those on the right.

The special guest appearance by the creator of the law, former Texas solicitor general Jonathan Mitchell, did not send anyone into a swoon, either. The chief justice interrupted him repeatedly, seemingly unimpressed with Mitchell’s lawyerly version of mansplaining.

Meet the Legal Strategist Behind the Texas Abortion Ban

Immediately after Roberts concluded the hearing, speculation about the court’s possible decision, which could come as early as Friday, began. Some feared that the high court will refuse to grant the injunction, “softening the ground to overturn Roe,” as one attorney who has long fought to maintain access to abortion told me. That day could come soon, when a Mississippi law banning most abortions after fifteen weeks comes before the court on December 1.

But Julie Murray, senior staff attorney for Planned Parenthood Federation of America, believes the court could very well grant the preliminary injunction. The attorney for the providers, Mark Hearron, made a motion for emergency relief during the hearing. A temporary restraining order might also be a possibility. “If that decision were favorable, we could reinstate services,” Murray said, hoping that reinstatement would offer “quick relief” to women in need. “I use that word relative to the experience we have been having. Going sixty-three days without your constitutional rights isn’t quick.”

Regardless, the case could be made that abortion opponents have already won, regardless of what the Supreme Court decides. “With the exception of the two-day period when there was an injunction in the [government’s] case, we are where we have been for the last sixty-three days and counting,” Murray said. “The reality is we know many people in Texas have now been forced to continue a pregnancy they had decided to end.”

According to Murray, these include Texans who are already parents and who know they cannot care for a child emotionally or economically, minors who need court permission for an abortion and cannot get out of state on their own, and victims of family violence. “The situation on the ground is dire, and has been dire, and nothing about the arguments yesterday has changed that reality,” Murray said, before she echoed the concerns stated by Kavanaugh that the law could be a model used by other states to target other rights guaranteed by the Constitution. “This law, that was designed to violate a clear constitutional right, is working exactly as the Legislature wanted it to. It takes away peoples’ autonomy.”