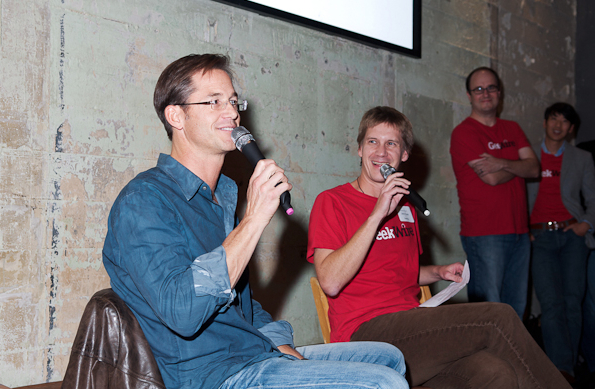 Editor’s note: This is a column written by GeekWire co-founder John Cook.

That was the rhetorical question Zillow Group CEO and co-founder Rich Barton asked a packed crowd at the first-ever GeekWire event, which took place almost exactly 10 years ago today.

The baseball analogy perfectly encapsulates Barton’s big-swing mentality, an entrepreneurial attribute that’s richly rewarded the tech executive over the years until this week when he whiffed on the promise of revolutionizing how people buy and sell homes.

You heard echoes of this quote on Tuesday when Barton — whose career home runs include Expedia and Glassdoor — referred to Zillow’s ill-fated venture into iBuying as a “big swing.”

I heard those two words, and immediately was taken back ten years to our interview in the backroom of the old Spitfire Bar & Grill in Seattle’s Belltown neighborhood.

RELATED: Why the iBuying algorithms failed Zillow, and what it says about the business world’s love affair with AI

And what strikes me from Barton’s comments back then is how much they echo today. He’s essentially the same entrepreneur, just with a few more gray hairs.

Barton is a Ken Griffey Jr. or Babe Ruth-style home run hitter of an entrepreneur, or to the more cynical baseball watchers, Barry Bonds.

Now, Barton’s swing and miss on flipping homes is certainly unleashing venom with some noting that Zillow pumped up its iBuying business months before the closure. The knives are flying, and not surprisingly.

Not only are 2,000 Zillow workers losing their jobs, but investors who bet on Zillow’s new strategy lost a lot of money. Zillow’s stock is up about 3% today after falling more than 30% this week. (Note: Some home sellers who took inflated offers from Zillow’s iBuying business made out just fine on the company’s miscalculations).

CNBC’s Jim Cramer this week railed against Zillow, placing Barton on his “wall of shame” and saying he should be fired for painting a positive picture of the company’s iBuying business as recently as August.

I don’t think i could ever own Zillow’s stock again after listening to that miserable arrogant, clueless conference call last night. Benchmark of suboptimal thinking

To Cramer’s credit, he warned investors in 2019 shortly after Zillow opened the door on flipping homes.

“I liked the old Zillow, even if it was slowing down a bit, as it was a lot less risky,” Cramer said at the time.

Prescient words from the “Mad Money” host, since Zillow this week essentially retreated into its traditional business of servicing real estate agents.

But business is about taking risks, and some entrepreneurs have a bigger stomach than others.

Zillow, for one, is built on that risk-taking ethos championed by Barton, something you don’t always see in public companies.

Remember, this is the company that gobbled up and assimilated its largest rival, Trulia, six years ago in a bold and unexpected move. That same ethos carried the company into iBuying.

Is Zillow’s strike out on flipping homes catastrophic?

Maybe, but maybe not.

The company is well capitalized with $3.2 billion in cash and investments in the bank, and its traditional business of selling advertising and tools to real estate professionals is profitable and growing. In fact, Barton’s quick and painful rip-the-band-aid-off approach on iBuying — which he worried could tank the entire company — might be looked back on as the decision when business professors analyze the move.

Barton took a big swing, and missed. And he certainly deserves some blame.

Baseball and business are made up of both strikeouts and home runs. You can’t have one without the other. In fact, the strike outs inform the home runs, so maybe it’s time to celebrate both (as frustrating as those strike outs are).

Like most big league ball players — all of whom fail more than they succeed — Barton will be back at the plate.

And it’s unlikely he’ll be bunting.