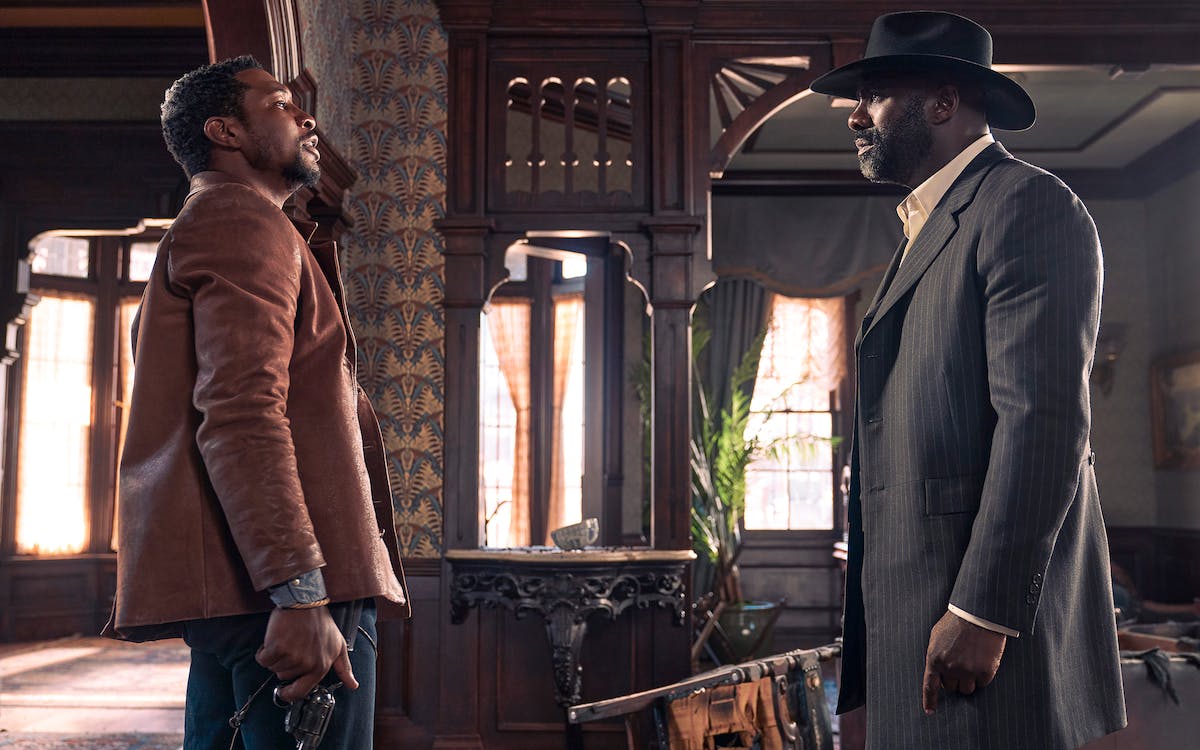 Last spring, after the pandemic stalled production on director Jeymes Samuel’s debut feature film, The Harder They Fall, most of the cast and crew left the set in Santa Fe. But lead actor Jonathan Majors stuck around, digging deeper into how to bring his character, Nat Love, the legendary, late-nineteenth-century cowboy recast as a heroic outlaw by Samuel, to life. Majors grappled with how to get into the soul and mind of a man walking a thin line between good and bad, who is moved by love, but ultimately driven by a lust for revenge. Samuel had an idea.

“Jeymes Samuel thought it was a good idea that the character I portrayed . . . play guitar,” the Dallas-raised Majors explained in a video shot for Vogue last August. On camera, he and Samuel sit on the porch of an adobe house, holding guitars while Majors strums a simple cord and croons in a rough but strong voice: “And I can’t live without you, baby / And I need you. So won’t you stay?”

Considering Samuel’s background—he’s also a British singer-songwriter who performs as the Bullitts—it’s not surprising that he wanted his main character (and indeed the movie itself, which is available for streaming on Netflix November 3) to have a musical soul. Samuel was an executive music consultant for the 2013 hip-hop infused The Great Gatsby starring Leonardo DiCaprio. That same year, he released his directorial debut, a short film that would be a (very) rough draft of The Harder They Fall, titled They Die by Dawn—an ambitious imagining of Black Western legends crossing paths (and pistols), featuring a star-filled cast that included Houston’s Isaiah Washington as Ben Hodges and Dallas’s Erykah Badu as Mary Fields. The film, to its detriment, barely had a soundtrack, so when Samuel dropped the western-infused electronic pop album They Die by Dawn and Other Short Stories in 2014, it was left to the imagination what the film might’ve been with Samuel’s music.

Samuel finally realizes his vision in The Harder They Fall, thanks to even bigger-caliber stars and an original soundtrack that includes new music from Jay-Z (who’s also a producer of the film) and that remixes western-movie soundtrack motifs with elements of reggae, rap, and jazz. Majors’s guitar doesn’t make it into the final cut of the film, but his singing does. It adds an element of sensitivity and depth to a character that could otherwise get lost amongst a busy cast and story. Idris Elba plays opposite Majors’s Nat Love as a very adult Rufus Buck. (While the actual Buck was indeed an outlaw, he was caught and hanged in his late teens or early twenties.) Elba’s Buck mercilessly kills Love’s mother and father when Love is just a child, leaving him traumatized and, literally, scarred.

Love grows up to become an outlaw who hunts other outlaws, primarily Buck and his gang. Buck’s gang, rather than the historical crew of multiracial teenagers terrorizing Indian Territory, is instead made up of the likes of Trudy Smith (Regina King) and Cherokee Bill (LaKeith Stanfield). Buck himself has so far escaped Love’s vengeance, having been caught and imprisoned by Bass Reeves (Delroy Lindo). But when Buck is freed by his remaining acolytes, Love teams up with Reeves, Jim Beckwourth (RJ Cyler), Bill Pickett (Edi Gathegi), a bouncer named Cuffee (a.k.a. Cathay Williams) (Danielle Deadwyler), and Mary Fields (a dark-skinned Black woman portrayed by the light-skinned Zazie Beetz).

In a star-studded, action-packed western in which every character has a big ego and is convinced he or she is the baddest thing to stroll into town, the story of Love and his thirst for revenge gets a little lost. But Majors holds his own among powerhouses like King and Elba, and embodies his character with an easy swagger that anchors the film. For one thing, of all the attempts at country accents, Majors’s sounds the most at home. And the occasional singing would probably be corny from a different actor, but coming from Majors, it works. The film leans into many western tropes, with plenty of gun twirling, some robberies, a damsel in distress, and general lawlessness and violence (there’s actually a bullet with someone’s name carved into it), but it also pokes fun at and elevates them just a bit. The script, although riddled with corny badass bluster (“I was fixin’ to kill you, when you and your fellas brought in Rufus,” Love tells Reeves, who replies, “A lot of men be fixin’, son. They always seem to die before they get the job done”), is slick and humorous. There are great back-and-forths, and nearly everyone gets in at least one good quip (“I’ve seen the devil and Rufus Buck ain’t him. The devil’s white,” says Reeves), but the quick-draw Beckwourth is the unmistakable comedian of the group. After a gangster complains about Beckwourth killing his brother, he retorts, “Your half brother; calm down.”

But what also adds to the fun is a Samuel-led soundtrack (he has writing credits on sixteen of the film’s nineteen songs) that’s an exciting departure from typical western-movie music and complements the film’s stylized visual language. Sure, sometimes the staging looks obvious and forced, but scenes such as Rufus Buck’s slow-motion walk off a train car while his gang shoot the lawmen who were transporting him, all over Samuel’s remix of “Here I Come,” is very pleasing to the eyes and ears. The same goes for the climactic final battle, filled with explosions, fast draws shot by even faster draws, and impressive horse riding, all perfectly synced to Fela Kuti’s “Let’s Start.” And even with all that action, the film is still mindful enough to bring home the point, during a dramatic confrontation between Love and Buck, that the cycle of revenge never really ends. As reggae musician Koffee sings on the title song, cowritten by Samuel and Jay Z, “The louder they roar / The harder that they fall.”

Even if Samuel’s characters stray far from their real-life inspirations, The Harder They Fall proves that there’s fertile ground for newer and cooler westerns that center the Black cowboys and cowgirls, outlaws, and law officials who shaped the West. With the movie clocking in at just over two hours, there wasn’t enough time for Samuel to get into the backstory of every character he brought back to life, but that also means there’s endless storytelling potential and plenty of room for others to take the reins.