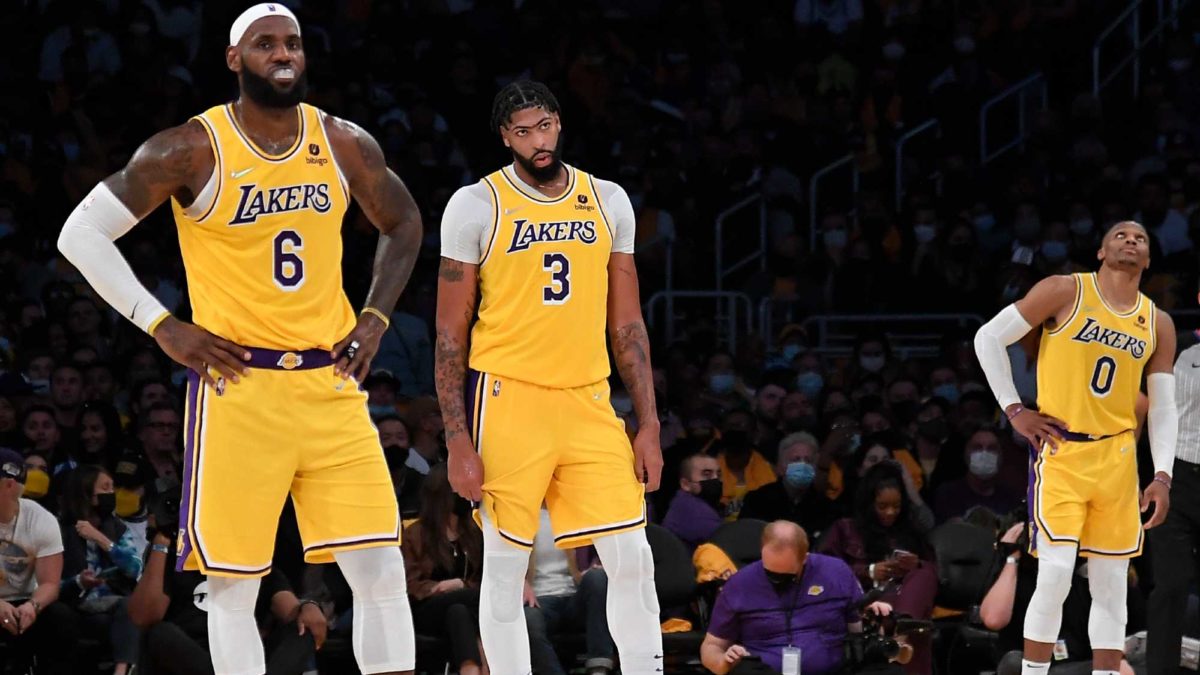 A quick glance at the standings will suggest the LA Lakers are on track to live up to their pre-season billing as one of the teams with a genuine chance to lift this season’s NBA trophy but there are some early warning signs in La La Land.

Heading into Friday afternoon’s (AEDT) clash with the Thunder, they are seemingly sitting pretty in third spot in the Western Conference with a 5-3 record and humming along as the veteran squad shrugs off pre-season rust and continues integrating the many new recruits who lobbed in LA for the 2021-22 campaign.

But their schedule has been as soft as Russell Westbrook’s defence and now LeBron James, who has already missed a couple of games, will miss at least a week with an abdominal strain with tough tussles on the horizon against Portland, Charlotte and Miami.

When they’ve taken on playoff calibre opponents, they’ve lost – by 12 to the Warriors in the season opener, by 10 to the Suns, both at home, as well as a road trip clunker to the team tipped to challenge for the worst record of all time, the Oklahoma City.

They’ve beaten the Grizzlies on the back of a late missed free throw by Ja Morant, the rebuilding Spurs in OT, the improving but still erratic Cavaliers and the Texan travesty known as the Rockets twice, the second one after a buzzer-beating three rimmed out.

This is not the formline of a true NBA title contender.

The season is still young and any team with LeBron and Anthony Davis in the line-up can’t be counted out but the signs aren’t good for the rest of this squad.

Westbrook is a notoriously slow starter every season, especially in a new environment like he’s been with Houston and Washington the last couple of years, but he has a history of being inefficient, especially if he’s not the go-to guy and he will never be more than the second ball handler while LeBron is on the court.

Carmelo Anthony has rediscovered his jump shot since transferring from the Trail Blazers but his defence, which hasn’t been terrible lately, will be a liability when the Lakers are matched up against the big dogs of the league in the regular season and particularly in the playoffs.

From there, who else on this roster can coach Frank Vogel rely upon for quality minutes? His options are either players who have had moments in the league but failed to prove their worth over the long haul like Kendrick Nunn, Kent Bazemore and Malik Monk or veterans well past their use-by date in Rajon Rondo, DeAndre Jordan, Dwight Howard, Trevor Ariza and Avery Bradley.

LeBron loves to make a mid-season trade or two, or three, or more to shake up an under-performing roster and it wouldn’t surprise to see the Lakers give up future assets to cash in on the final year or two of his historically long prime.

To be fair, Utah and Golden State are the only two teams in the west who have looked indestructible so far. Miami have done likewise in the Eastern Conference while some other teams have made hot starts but have questions lingering over their credentials like the Bulls and Sixers.

It’s way too early in the season to make dire predictions on the Lakers but the warning signs are there that if changes aren’t made, they could be making up the numbers when the playoffs roll around.

Keep your eyes on …

The Chicago Bulls – for all those diehards with tatty Jordan throwback singlets, the proper ones not those who wear it for the street fashion cred, the Bulls are back… potentially.

The addition of DeMar DeRozan on a big-dollar deal in the off-season was viewed with suspicion but he has worked in well alongside Zach LaVine with Nikola Vucevic taking a lesser role as the Bulls have surged to a 6-2 record on the back of impressive wins over surprise packets Toronto, the misfiring Celtics and the previously unbeaten Jazz.

Three-point records – after the first fortnight of the season there were nine players shooting at 50% or more from beyond the arc, led by Houston veteran Eric Gordon’s 55.6% with Patty Mills (52.4%) also in the mix. That’s bonkers.

Trade talk heating up – while there is no movement on the Ben Simmons front, there could be a few mumblings turning into murmurings then morphing into chatter at a few teams. Indiana look the most likely team to make an early move with the team struggling, new coach Rick Carlisle keen to bring in his own style of players and the Myles Turner/Domantis Sabonis surfeit in the frontcourt surely coming to an end. The Portland situation is also worth watching – the support cast around Damian Lillard is still not enough and CJ McCollum could become expendable.

Flagrant foul: WTF Moment of the Week
Have you seen the OKC City Edition uniform released this week? That ain’t right. It’s just all white – the singlet, the shorts. The lettering and numbers are grey. It will be very hard to pick up the player’s name and number when they wear these things but it will look like they’re wearing underwear on court.

Pretty much the other 29 jerseys are bangers or at least the team has put some effort into making them stand out from the crowd. The Thunder are taking an L on this one.

Out of the box scores: Stat of the Week

Grizzlies rising star Ja Morant is averaging 2.4 loose balls recovered per game, according to NBA.com stats, the next best is Toronto’s Gary Trent jnr at 1.8. Morant is not only a potent scorer and emerging leader at Memphis, he grits and grind in true franchise fashion and is all but a lock to make his first All Stars team this season.

Boomshakalaka! Quote of the Week
“Bing bong is here to stay because it means something so positive. It means only good things toward the Knicks. There are no negative connotations. It’s not ‘Go Knicks, screw the Raptors’. It’s ‘Go Knicks, we love New York’.” The NBA’s early-season social media sensation, Bing Bong guy Jordie Bloom, tells nymag.com his dream for his viral catchphrase.

If you are not watching Knicks v Bucks at 10.30am AEDT on Saturday, you are doing the NBA wrong. New York (5-3) have the better record than the 4-4 champion Milwaukee squad which has been missing injured guard Jrue Holiday big time.

Sunday’s match-up is another no-brainer – arguably the two hottest teams in the league going head to head when the Jazz travel to Miami. Utah guard Donovan Mitchell and Heat veteran Jimmy Butler are dark horse MVP candidates if either of their teams tops their conference and they’ve both been in superstar mode this season.