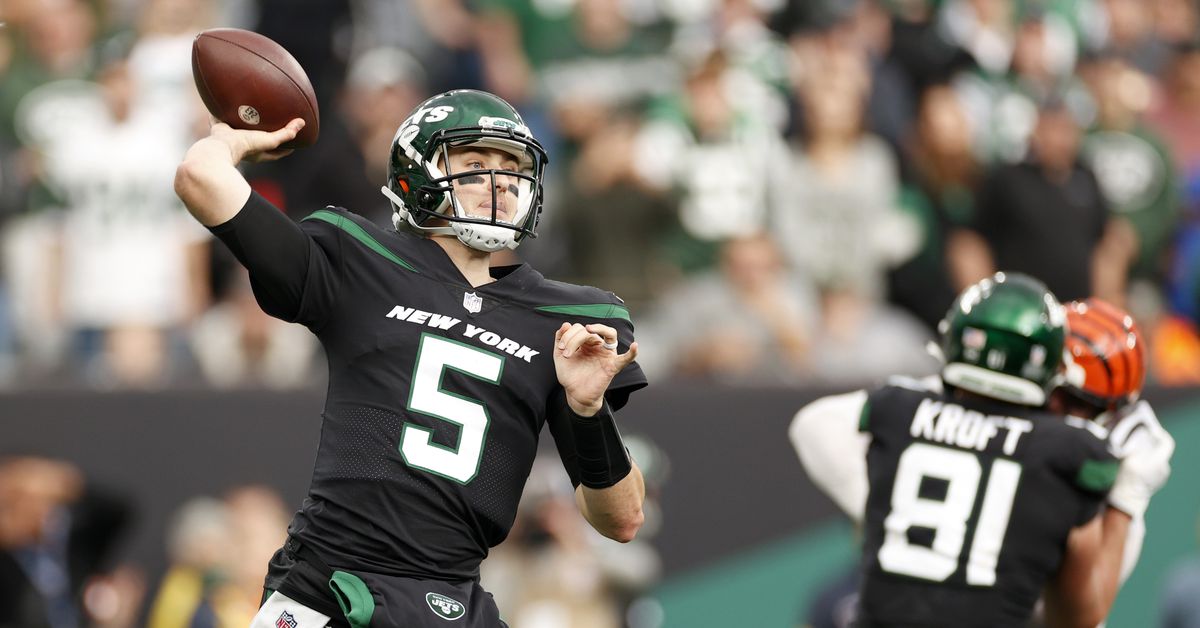 The 2021 season was supposed to be a turning point for the New York Jets. They had a new head coach, highly touted for his discipline, and a new franchise quarterback selected at the top of the NFL Draft. Nine weeks into the season, and it’s not Zach Wilson people are talking about, but Mike White.

Who’s Mike White? Good question. The 26-year-old QB is already in Canton for setting the single-game completions record, and only the second player in history (alongside Cam Newton) to throw for over 400 yards in his first start. His story is capturing the imaginations of fans in New York and beyond. Now the big question is if he can keep it going.

So who is Mike White? Where did this guy come from? And what could he mean to the future of the Jets?

White always played quarterback, but didn’t get a chance to start in high school until he was a senior. When his name was finally called, he excelled — throwing for 2,200 yards, 22 touchdowns and just two interceptions. It was enough to get noticed by South Florida, who recruited him despite the fact that he wasn’t a highly touted prospect.

The start to his South Florida career wasn’t great for White. He found himself struggling in the system, and eventually decided to transfer after Willie Taggart was named head coach and announced the team would be moving from a pro-style offense to the spread.

White was granted his transfer, and sat out a year — eventually landing at Western Kentucky, hardly a prestigious breeding ground for NFL quarterbacks. Once he got on the field for the Hilltoppers, White excelled by throwing for over 4,000 yards in back-to-back seasons, and performing well at the Senior Bowl.

The hype around White was real, but he fell in the 2018 NFL Draft after some very average performances at the combine. Eventually he was selected in the fifth round of the 2018 NFL Draft by the Dallas Cowboys, who intended him to backup Dak Prescott.

In 2019 he was released, and the QB was soon contacted by the Jets. Drifting around the team’s practice squad, it was unclear whether the team would keep White around, especially after making the switch at head coach to Robert Saleh. However, showing faith in his abilities, the Jets re-signed White in January of 2021, making him the team’s backup quarterback to their eventual starter they’d be taking in the draft.

Shining when it mattered

Jets fans had been witness to some of the worst QB play this season as No. 2 overall pick Zach Wilson struggled to develop over his first seven starts. Part of this was just a rookie taking his lumps, but alarmingly there was evidence that he wasn’t really improving, continuing to make the same mistakes again and again.

That said, there was also a firm belief that a lot of the issue was a lackluster Jets offense, that theoretically nobody could thrive in. That was put to the test when Wilson was injured against the Patriots in Week 7, forcing White to take over.

While that relief role appearance wasn’t incredible, people noticed that the offense was running more smoothly with White under center, than it was with Wilson.

In his first career start Mike White was sensational. Entering Week 8 against a Bengals team that was rolling, not only did the team have White start, but they really made him play. This wasn’t a case of asking him to simply hold down the position. Instead the Jets put the game in his hands. White rewarded the team with the best passing performance they’d seen not only in 2021, but likely of the last two years.

It was the second time in NFL history that a player threw for 400 yards or more in their first start, and White’s 37 completions set a new NFL record in a first career start. Watch the full highlights of White’s performance here.

His record-breaking performance got his jersey in Canton:

Now White is poised to make his second start on Thursday Night Football against the Colts, giving him another chance to shine.

What does this mean for the future?

It’s important not to get too carried away with White’s early performances. I’m not trying to be a wet blanket, but until opposing defenses get a chance to scheme for him it’s largely foolish to make bold proclamations.

However, this whole scenario does raise a lot of questions about the future. If White keeps thriving it’s unclear what the Jets will do, and there’s such a groundswell of support behind the 26-year-old underdog is fast becoming a fan favorite, and could cause a real QB controversy for the Jets.

Either way, it’s going to be fun to watch this unfold.