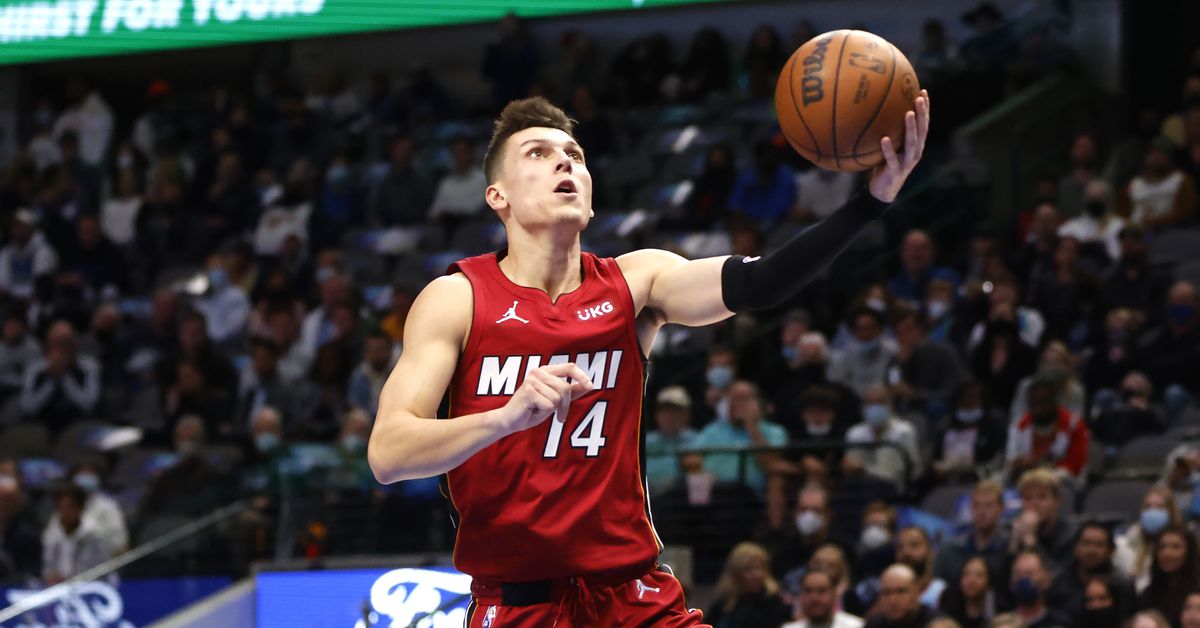 Tyler Herro has never lacked confidence. His rise up the basketball world started with a bet on himself: Herro reneged on his college commitment to his hometown Wisconsin Badgers for the brighter lights at Kentucky. Upon arriving in Lexington, he told the world “I’m a bucket” as he blossomed into a lottery pick. When the Heat drafted him, Herro quickly endeared himself to Jimmy Butler and proved he could be an immediate contributor.

Herro’s rookie season was extended by the pandemic, and he broke out as soon as the Heat arrived in the bubble. The 6’5 guard was a dynamic shooter and scorer during Miami’s unlikely run to the NBA Finals, but he soon learned the pitfalls of success. Herro’s name was constantly part of trade rumors as the Heat reportedly poked around on landing a superstar. There were whispers that he was partying too much. His second-year numbers stagnated and the idea that Herro was a future star started to wear off.

If the rest of the league began to lose confidence in Herro, it should have come as no surprise that he still thought highly of himself. He said in a preseason interview that he viewed himself in the same category as Luka Doncic, Trae Young, and Ja Morant. If the start of Herro’s third season hasn’t exactly put him in that company, it has confirmed he’s going to be a major factor for Miami this season.

Herro has popped off for 22 points or more in five of the Heat’s first seven games. He continued his hot start in Miami’s road win against the Dallas Mavericks on Tuesday night, scoring 25 points including 15 in the second quarter. Watch his full highlights here:

Herro’s 157 total points through the first seven games are the most for a bench player in NBA history to start a season. Head coach Erik Spoestra praised the worked he put in over the offseason, and he does look bigger and quicker to start the year. His numbers are rising across the board.

Right now, Herro is averaging more points, assists, and rebounds per 100 possessions than he has at any point in his career. He’s taking more shots than ever before, and scoring more efficiently than he ever has.

The Heat are 6-1, which is tied for the best start in the league. They’ve already beaten championship favorites Milwaukee and Brooklyn, and feisty upstarts in Charlotte and Memphis. The sample remains small, of course, but Miami has the league’s best defense and second-best offense. Their net rating of +16.4 is more than four points higher than No. 2 Utah.

The season is young, and Miami’s depth is still a major question mark. Judging by the early returns, though, Miami’s best lineups look like they’re going to be potent on both ends of the floor. Herro is a big part of that.

The big addition for the Heat over the offseason was Kyle Lowry. As the 35-year-old has slid into the starting point guard role, it’s freed up Herro to play like the true combo guard that he is. From early in the season, Herro credited Lowry for his basketball IQ and ability to organize the offense.

“I love playing with Kyle,” Herro said. “My first two years in the league I didn’t really have a point guard that could get everyone organized to their spots. That’s no knock on my previous teammates. It’s just the way that Kyle gets everyone to their spots, how he’s a leader. He just understands the game in a way that not many people do.

“Just being next to him is obviously amazing for me.”

Lowry, Jimmy Butler, and Bam Adebayo form the foundation of the Heat’s success. It’s a trio that Herro fits next to undeniably well. All three are strong defenders both at the point of attack and when providing help, and they can erase any mistakes from Herro on that end. Offensively, the trio draws so much attention from opposing defenses that Herro is free to flourish both on and off the ball.

Movement shooting from Herro and teammate Duncan Robinson is going to be critical to Miami’s offensive success. Both players can fly around screens while their All-Star teammates take on the brunt of the defensive focus. So far this year, Herro is shooting 50 percent on catch-and-shoot opportunities from three-point range.

What separates Herro from a player like Robinson is that he also brings way more juice on the ball. Send two defenders at Herro off a screen, and he can beat the defense with his passing. Herro is also a quality pull-up shooter, making 35.5 percent of his threes on almost 4.5 attempts per game this year.

Herro has been working on his mid-range game this year. He’s currently taking 51 percent of his shots from mid-range, per Cleaning the Glass, up from 38 percent last year. Herro said he made the mid-range a priority after watching the way Chris Paul and Devin Booker had so much success from that part of the floor on the Suns’ way to the NBA Finals. To start the season, he’s 12-of-20 (60 percent) on mid-range two-pointers.

Working the mid-range allows Herro to get into a rhythm a little easier than it would if he were only shooting threes and layups. He has the touch to consistently make those shots.

It’s still so early, but Herro’s awesome preseason has given way to a very strong first few weeks of real basketball. He’s in a great position for success next to Lowry, Butler, and Adebayo. It feels like he’s going to be the odds-on favorite for Sixth Man of the Year.

After a stagnant season last year, Tyler Herro is back to being a bucket. Just know he never lost faith in himself.