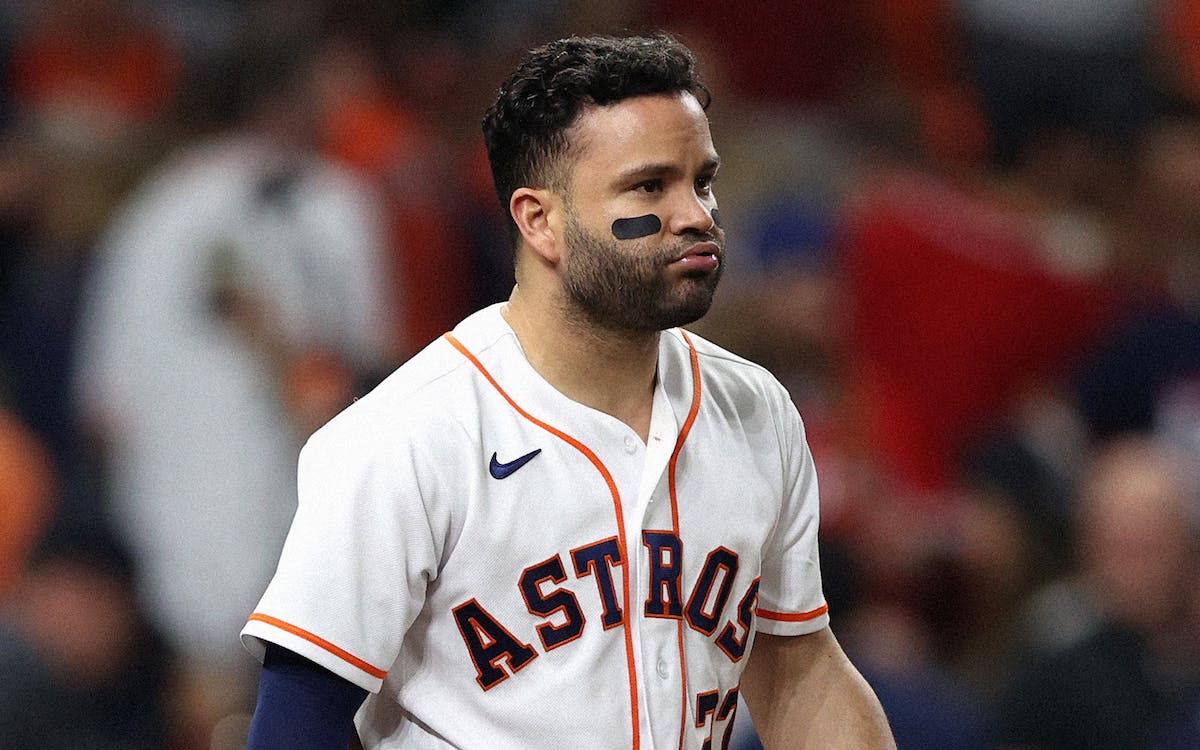 Facing elimination over the weekend, the Houston Astros won Sunday’s game five to force the World Series back to their home field. That meant one more night in front of a roaring crowd at Minute Maid Park, with all the electricity and optimism that comes with a hometown team playing for a championship. That counts for something.

Houston’s relationship with its baseball team is a sweet little love story, with this latest trip to the playoffs greeted with pretty much the same enthusiasm that accompanied the franchise’s first one of this era, back in 2015. The Astros have missed the postseason just once in the seven seasons since, consistently flirting with championships and giving their fans a product that’s as good anything else in the world of professional sports.

All that success has not diminished the 2021 squad’s effort, joy, swagger, and whatever else made them enormously appealing, at least in Houston. As the Astros have become more and more reviled around the country due to a 2017 cheating scandal, their hometown fans have rallied around the players, defended them (sometimes to a fault), and adored them more than ever. So we broke a few rules? Sue us!

In the end, that’s what Houstonians are left to celebrate in the wake of another postseason disappointment. Tuesday night’s huge crowd went quiet early in game six when fans sensed where the game was headed. The Atlanta Braves scored three times in the third inning and three more in the fifth on their way to a 7–0 rout and a celebration of Atlanta’s first World Series title since 1995.

After weeks of nail-biting finishes and wild celebrations, the Astros simply ran out of gas, and their fans sensed it around that third inning. There’d be no more comebacks. The Astros were beaten by a better team, with a pitching staff built around power arms that stopped baseball’s highest-scoring offense in its tracks. Lots of the focus will be on two of Houston’s biggest stars, Alex Bregman and Yordan Álvarez, batting .095 and .100 on the sport’s biggest stage, but at almost every key moment, Atlanta made plays befitting a championship team.

For the Astros, the highlight of this World Series—they never once looked like the better team—was forcing a game six with Sunday’s 9–5 victory in Georgia. They were down three games to one and facing elimination, then fell behind 0–4 in the first inning. That’s when they came alive offensively and got nice work from five relievers to mount a comeback. Simply bringing the World Series back to Houston for one last curtain call will be the memory some fans carry into the off-season.

Maybe it’s fitting that this year’s Astros ultimately succumbed to Atlanta, the same franchise whose 1995 championship came during a stretch in which the Braves made fourteen straight postseason appearances, reached the World Series five times, and emerged victorious only once.

Houston has lost six of its last seven World Series home games, and the Astros’ lone championship is widely seen as stolen. This does not put them in league with the Buffalo Bills teams that lost four consecutive Super Bowls in the 1990s. But the Astros’ run of enormously successful, close-but-no-cigar playoff appearances is a reminder of the cruel outcomes that accompany playing at the highest level during an MLB era marked by competitive balance and parity between teams. Atlanta is the fifteenth different franchise to win a World Series since 2000, and baseball hasn’t had a repeat champion since the New York Yankees won three in a row from 1998 through 2000.

Those first three runs of Tuesday’s game six—a three-run home run by Atlanta designated hitter Jorge Soler—was the emotional knockout the Astros had resisted during a playoff run in which they eliminated the Chicago White Sox in the opening round, rallied from behind to knock off the Boston Red Sox, and then simply had too little left in the tank for the Braves.

Houston’s offense, the one that led all of baseball in runs and clubbed 221 homers during the regular season, was smothered by the Braves. The Astros batted .224 and homered just twice—both by José Altuve—in the six games against Atlanta. In Houston’s four losses, the team mustered a total of four runs.

Some will see this loss as the beginning of the end of the Astros’ seven-year run of success. The team’s best player, shortstop Carlos Correa, is set to explore free agency in the off-season. With multiple teams, including the Texas Rangers, prepared to bid for his services, his return could not be more uncertain. Correa’s postgame comments sounded a lot like a farewell to Houston: “All I can say is I did everything in my power to make this team a better club, this organization to keep training in the right way, and I’m proud of my time here.”

The Astros overcame the loss of outfielder George Springer when he signed with the Toronto Blue Jays last off-season, but at some point, the holes become too much to fill. Losing Correa could be the tipping point.

On the other hand, the franchise did a marvelous job blending young players like Yordan Álvarez, Kyle Tucker, and Luis Garcia into the mix this season without missing a beat. With more elite prospects in the pipeline, most notably shortstop/outfielder Pedro León, it would be a mistake to assume Houston won’t be able to maintain its success and be in position for a deep playoff run in 2022.

This is, after all, the same Astros team that got to the World Series without Justin Verlander throwing a single pitch all season. The same team the pushed the Braves to six games despite ace pitcher Lance McCullers missing the entire World Series with a sore elbow. The same team that kept winning postseason games even though veteran starter Zack Greinke only wound up pitching six and one-third playoff innings after injuries and COVID-19 sidelined him for much of September.

Heading into the offseason, Verlander and Greinke are both free agents, and both seem unlikely to return, clearing about $65 million in salary flexibility. Baker is also a free agent, and his status should be resolved in a few days.

Once Astros fans have some time to get over the loss, they’re almost sure to see this season as anything but a disappointment. Their team didn’t win the final game, but for most of the last seven months, the Astros provided a happy diversion in restaurants and offices, in barbershops and gyms. At a time when we agree on almost nothing, the Astros brought the city of Houston together. When Ted Cruz and Lina Hidalgo are pulling on the same end of the rope, you’ve done something special.

Those expectations will be much harder to meet if the franchise loses Correa, but if there’s any team that’s shown they can retool a roster while dealing with everything from departing stars to white-hot controversies, it’s these Houston Astros.