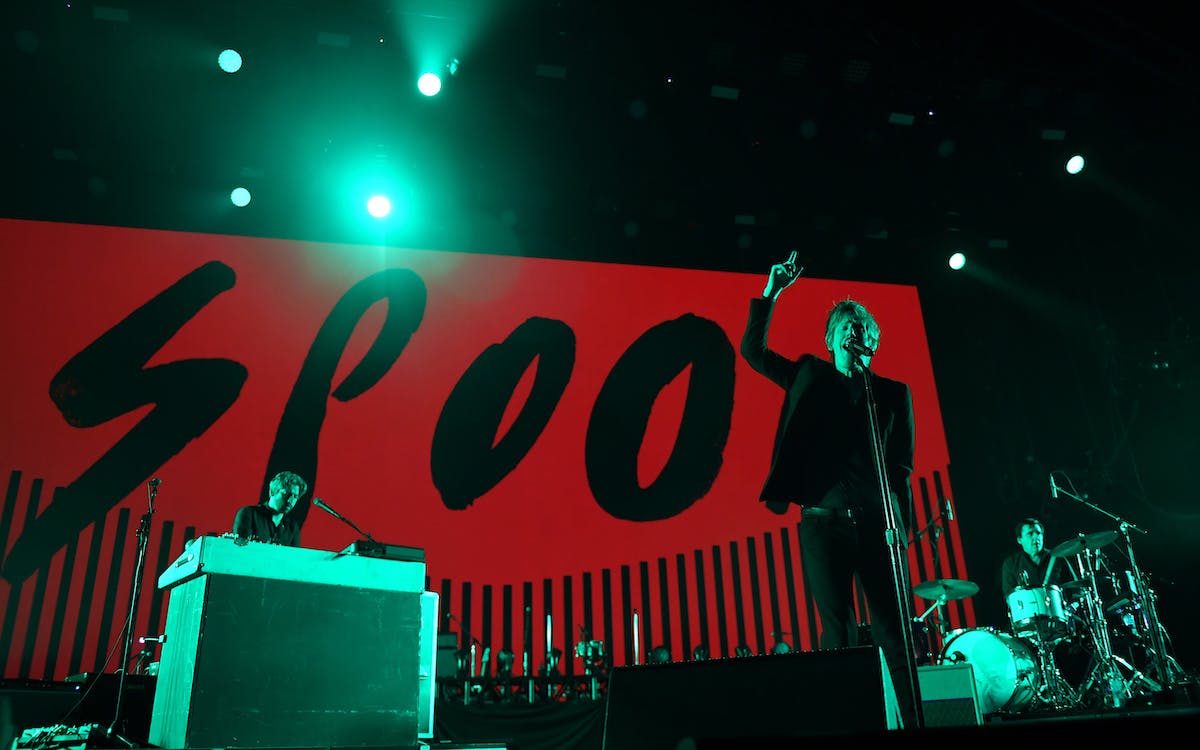 Last week, when Spoon played three shows in and around New York City, Matador Records co-owner Gerard Cosloy had high praise for the current lineup, which has been together only since the summer of 2019.

“He said, ‘This is by far the best lineup this band has ever had, and you know it,’” Spoon front man Britt Daniel relates with a modest laugh. “And I said, ‘Yeah, I do know it.’”

Seeing as how Matador signed Spoon to its first record contract in 1994, then brought it back to the label 23 years later, Cosloy is an expert, if an unobjective one. And having been around the band as both a fan and journalist for even longer, you might say the same of me. But Cosloy’s assessment happens to be true, and the proof is in Spoon’s tenth album, Lucifer on the Sofa, out February 11. A single from the album, “The Hardest Cut,” drops today.

Basically, it’s gonna be your favorite Spoon record since your last favorite Spoon record, and that’s no small thing in a catalog with so many high points, and ones of such depth and consistency. Produced primarily by Mark Rankin (Queens of the Stone Age, Adele), Lucifer on the Sofa’s ten songs crackle with energy, earworms, and seemingly limitless guitar and keyboard textures, while still sounding, as always, unmistakably like Spoon. By the third listen, I felt like I had had the thing for years.

Bands always think their new record or most recent lineup is the best one. “But I don’t take for granted that a band can exist this long and still be improving, getting to a place that they hadn’t before,” says Daniel. “I don’t see that happen very often.” Even someone as great as Prince—one of Daniel’s biggest heroes—was arguably at his peak for just one decade. Daniel remembers rushing out in 1988 to buy Prince’s tenth record, Lovesexy, “and I was a little disappointed. Feeling like, ‘oh, he blinked for the first time.’”

One way to keep a band fresh is to change its members. Daniel, with his rich, rangy voice and barbed-wire guitar, and drummer Jim Eno have been Spoon’s only constants since its 1993 founding in Austin. After fourteen years of rotating backup musicians, with only bassist Joshua Zarbo lasting very long, Spoon added multi-instrumentalist Eric Harvey in 2004 and bassist Rob Pope in 2006. The current lineup began in 2013, when the band brought on keyboardist-guitarist Alex Fischel, who first played with Daniel in 2011 in the side project Divine Fits. In 2017, Gerardo Larios (of the Austin bands Money Chicha and Hard Proof) took over from Harvey, and Ben Trokan (Robbers on High Street) replaced Pope in 2019.

The band’s two most recent albums, 2014’s They Want My Soul and 2017’s Hot Thoughts, were made with producer Dave Fridmann (Tame Impala, Lord Huron) in his Fredonia, New York, studio. During the Hot Thoughts tour, which wrapped up at the end of 2019, Daniel and his bandmates had a strong idea of what they wanted their next album to sound like. Daniel liked the electronic experimentations and rhythmic left turns of Hot Thoughts, “but it was a conscious decision after playing those songs live that we wanted the next one to be . . . I don’t know. I think every time you do an album, you’re reacting against the last one. We wanted to go back as much as we could to a record where it’s about a band playing in a room, playing rock and roll music, and playing off of each other. Just kind of more old school, where you figure out what the songs are going to be, hash them out over months, and then you hit ‘record.’”

And Daniel knew where he wanted it all to happen. A Temple native who attended the University of Texas at Austin in the early nineties, he’d been no more than a part-time resident of the city since 2005, having lived in both Portland, Oregon, and Los Angeles. But at the end of the Hot Thoughts touring cycle, he finally bought a house in Austin. Fischel, an L.A. native, packed up his stuff to join Daniel and the rest of the band (Trokan still calls Brooklyn home) and they started recording Lucifer at Eno’s Public Hi-Fi studio in late 2019.

“We just wanted to do a different thing this time, and experience the vibe of a city,” Daniel says. “One of the great things about Texas is that it’s that kind of place that springs forth Willie Nelson and ZZ Top, but also springs forth the 13th Floor Elevators and the Butthole Surfers and all of that. When I moved to Austin, all those elements were pretty much peacefully comingling at parties and barbecues and rock clubs. We wanted to make a record where we can draw from that. Alex and I, we’d be writing all day, go out and see Dale Watson at the Continental Club, and then come back and write some more.”

In other words, they jammed—and tried to keep it vérité. On the album’s first song, “Held,” you can hear Daniel telling Eno to play a longer drum fill, and the track also opens with producer Rankin’s voice in separate stereo channels—“we’re rolling, take two / We’re rolling, take five”—referencing the fact that Eno played different drum takes for each channel. “Held” is also a cover; the song was originally performed by Austin songwriter Bill Callahan’s old band Smog. It’s just the first of many Austin moments on the record, both explicit and implied.

The moody “Astral Jacket” was finished after a night out at the defunct East Austin club Stay Gold, watching Sabrina Ellis of Sweet Spirit and A Giant Dog play on a perfect, not-too-cold December night. Both the title track and “The Devil and Mr. Jones” make one think of the late Austin artist and musician Daniel Johnston, for whom the devil was an omnipresent menace. And “On the Radio” is largely about Britt Daniel’s memories of growing up in Temple, listening to rock music late at night on the radio station KIXS in Killeen, and then discovering more obscure stuff on Jody Denberg’s Sunday night free-form show on Austin’s KLBJ.

That song also finds Daniel referencing his own full name, which he shares with his paternal grandfather. It’s hardly a secret (it’s on Wikipedia), but it’s not something that many people know. I think I was born to it. They say, “How come you still play that game John Britt?” (“I just always liked it when people mention their own names in songs,” he shrugs.)

“The Hardest Cut” was directly inspired by ZZ Top, whom Daniel saw live for the first time in 2019 (“That sent me on a journey,” he says). It was the first song Daniel and Fischel worked on together in Austin. It started off as just a sound, no lyrics. Daniel created a drop-D tuning riff—a guitar sound most common in heavy metal—over Fischel’s chords and partial melody, creating something that, Daniel says, “sounded like Texas highway rock. For a long time, we called the song ‘Texas Riff.’ I don’t think we’ve really ever had a song like that one, with that kind of slinky rock ‘n’ roll vibe.” At the same time, adding  ZZ Top’s crunch minimalism influence to the sound of a band that already revered Wire and Prince makes unexpected sense—these are not bands you’d lump together, but they were all masters of riff, rhythm, and repetition.

Lucifer on the Sofa is also a pandemic record. The sessions stopped in those early, uncertain days, with Fischel and Daniel not even meeting one-on-one. And it got worse: Fischel began experiencing cold symptoms in April 2020, couldn’t get a COVID-19 test, and decided to hoof it back to California. Daniel says Fischel, freaked out and concerned about being contagious, drove straight there, stopping only for gas fully gloved and masked (and, we assume, for the occasional rest), and quarantined himself until the symptoms passed. Fischel would return on more of an ad hoc basis once recording resumed in September 2020. In the meantime, Daniel kept on writing. “The time that I felt most normal was when I would get lost working in music,” he says. “And so I would just try to do it as much as I could.”

From those weeks/months of writing in isolation came the album’s title track. “Lucifer on the Sofa” is masterful and moody, a horn-and-keyboard-laden elegy for pre- and post-pandemic Austin that is pretty much nonfiction: “Now you’re cruising up Lavaca, against the traffic lights. Gonna walk all evening, there’s no one out tonight . . .” Daniel sings. “Now you’re thinking about Dale Watson / Thinking about turquoise.”

“I definitely had a number of nights like that,” says Daniel. “I would walk from my house to downtown Austin and it was just deserted like you could have never imagined.”

But as the pandemic waned in the summer, Spoon returned to performing live gigs. Its first show back was a last-minute surprise, a partial-capacity performance at Austin’s Mohawk on July 1. “I came out, and I said, ‘Is this real life?’ because it honestly just felt at times like it would never happen again,” Daniel says. That was followed by a short fall tour, including three dates with St. Vincent and a September 28 show at Los Angeles’s Teragram Ballroom in which they debuted some songs from Lucifer. That performance was professionally filmed and recorded and will be available for watching tonight and tomorrow on the streaming platform Moment House, under the title “Back to the Life/Live From Los Angeles.”

“Back to the Life” is a Spoon song off of 2002’s Kill the Moonlight, but for now, at least, “the life” refers to playing, and just being in the band. “It’s the greatest thing in the world to be able to do it again,” Daniel says. Spoon is back, in Texas and in glorious form. Lucifer is off the sofa.