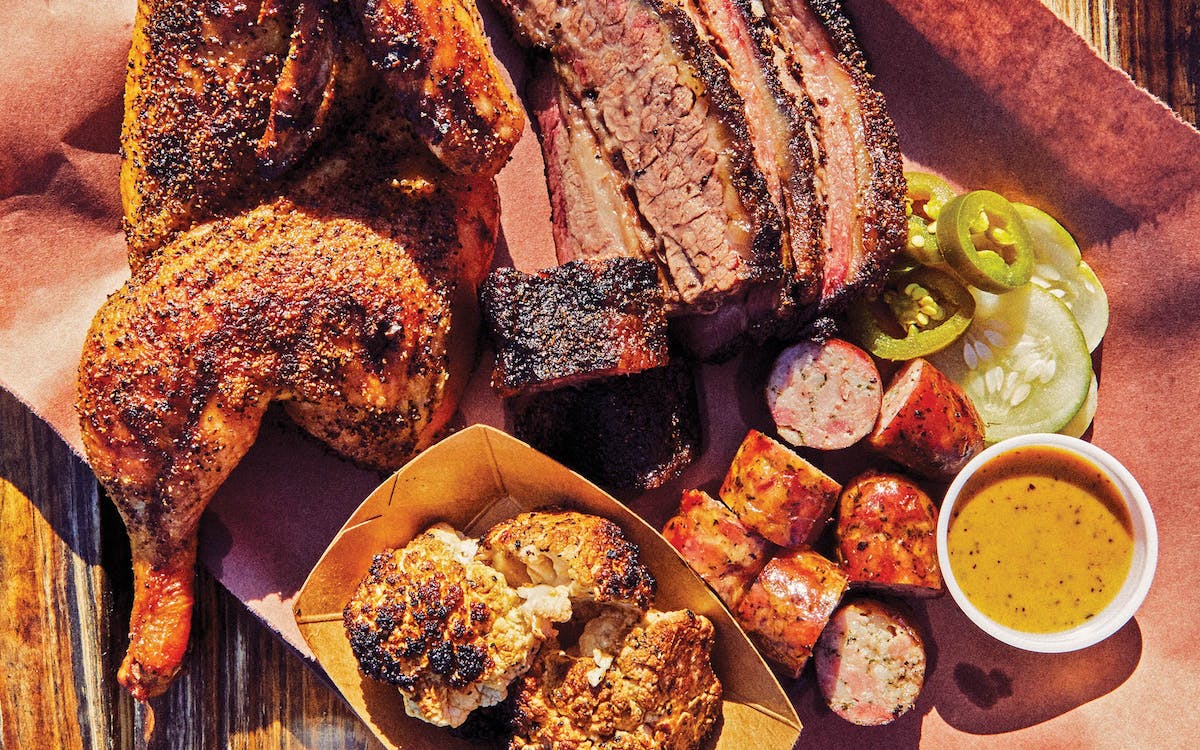 Just a decade ago, Texans took our state’s basic barbecue meal for granted. It was the sacred trinity of brisket, pork spareribs, and sausage, served with potato salad, coleslaw, and beans on the side. The biggest decision diners had to make was whether they wanted ice cream with their peach cobbler. The lineup seemed as fixed as the brick barbecue pits in which the meats were smoked.

And it wasn’t just the menu that was unchanging. Places and personalities seemed perennial as well. Two of the many truths we held to be self-evident were these: Lockhart was the unchallenged capital of Texas barbecue, and Snow’s BBQ, in Lexington, and Franklin Barbecue, in Austin, were the best joints in the state. That pair of enormously admired institutions captured the number one and two spots on Texas Monthly’s 2013 and 2017 lists of the fifty best barbecue joints (Snow’s also ranked first in 2008, before Franklin opened). They epitomized old-school Texas barbecue at its finest. Aspiring and veteran pitmasters alike visited them as if they were shrines.

But in the past half decade or so, we’ve begun to notice that the winds of change are growing quite gusty. In cities and towns across the state, new joints have been opening, and young, ambitious pitmasters have been getting into the game. Because they’ve been inspired by Texas’s long and storied barbecue tradition, the Texas trinity still dominates, and brisket has only gotten more popular (and expensive). That said, the upstarts have lots of new ideas.

As you would expect at a time of transformation, compiling our Top 50 list was a challenge. Even we were shocked by some of the changes we felt compelled to make. The former lodestars in our firmament, Snow’s and Franklin, no longer occupy our first or second spots (though both made the top ten and are absolutely worth visiting). For the first time, sadly, no Lockhart joints made the list (though the venerated Kreuz Market does appear in our Honorable Mentions, page 106). But the flip side of those descents is that Texas barbecue boasts an exciting freshman class: 29 of the 50 entries are new to the list, including the rookie establishment that vaulted to our number one spot.

In short, if you were hoping for an argument that innovation is getting out of hand and it’s time to retrench and return to the simpler days of barbecue, you won’t find it here. But have no fear: if you’re an old-school stalwart who blanches at the thought of smoked cauliflower, plenty of places on our list will make you very happy.

Is Texas barbecue losing its soul, as some might fear? No. The staples aren’t going anywhere, and the rising generation of pitmasters prepares them as well as—and often better than—anyone ever has. The up-and-comers aren’t erasing anything; they’re adding to what we have and paying tribute to our culinary heritage by reinvigorating it.

Welcome to the brave new era of Texas barbecue. The best is yet to come.