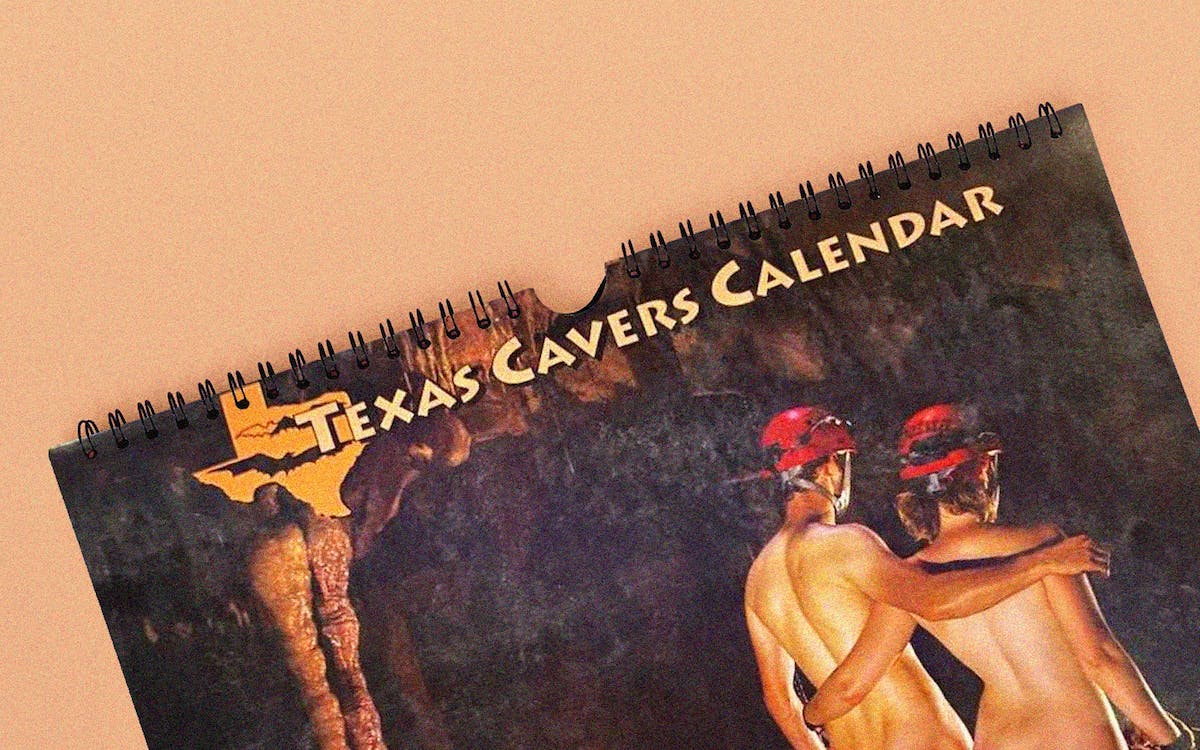 It can take hundreds of thousands of years for caves to form. Outside their damp walls, centuries whiz by at a breakneck pace, but inside, Nature works slowly and meticulously, hunched over like a hobbyist constructing a ship in a bottle, carefully lengthening a stalactite here, carving out tunnels with a subterranean spring over there. The resulting grottoes are beautiful, delicate wonders of the natural world. And every few years, to help raise money to preserve them, groups of scrappy Texans squeeze into the rocky cavities, disrobe, and pose for risqué calendar photos.

“Cavers like to get naked,” said San Antonio photographer Bennett Lee, the man behind the 2018 Texas Cavers Calendar and one of several photographers involved in the 2022 calendar. We spoke in September, at a bar in New Braunfels, prints of previous years’ calendars strewn between us. At suspiciously regular intervals, servers appeared at our table with pitchers of water to refill our barely touched water glasses, pouring slowly as their eyes roamed over the salacious spreads.

The 2018 calendar was a departure from form, Lee explained. He wanted it to be more artistic than its predecessors, focused more on the architectural features of the cave and the curve of a hip than on the practicalities of caving. The cover, for example, was a dramatic shot of dripping, golden stalactites and, in the distance, peeking through a small tunnel in the background, a cherubic rump that Lee proudly informed me was his own.

Besides, there had allegedly been behind-the-scenes disagreements during the making of the previous calendar, in 2010—rumors of cavers holding up the production process because they wanted some pictures to be included over others. The rumblings of discord were enough to convince Lee, years later, to make the 2018 calendar on his own. “I was just like, screw it,” he said. “I don’t have to worry about any of that crap. I don’t have to worry about any of the infighting. I’m just going to make what I want.”

The calendars, which have been printed sporadically over the past two decades, are not an official TCMA project; they’re put together independently by groups of enthusiastic cavers who have an eye for capturing their fellow spelunkers in various states of deshabille.

They haven’t historically been huge moneymakers. In 2018, Lee ordered two hundred copies, fifty of which he gave away to the calendar’s models. Then he sold about one hundred for $20 each, with all the profits going to TCMA. “I was happy with that,” said Lee, though he still has fifty copies left at home. “Every now and then I get someone finding out about it and they buy one.”

The decentralized creation of the calendars has meant that each iteration has had a distinct aesthetic and tone. The first two, published in 2002 and 2005, were called “Texas Women, Texas Caves.” They were printed in black and white, and featured, as the title suggests, all female models. The photos had a classic, mid-century pinup feel to them. April 2005: A dark-haired woman stands in a narrow tunnel, gazing suggestively over her shoulder, a heavily adorned equipment belt slung low across her naked waist. July: A woman in a helmet and headlamp kneels in a shallow cave pool, her ample, tattooed bosom busting out of the confines of her wetsuit. August: a pair of ethereal cave nymphs crouch in a forest of gnarled stalagmites, bare backs to the camera, their heads twisted around to stare into the darkness beyond.

By the next printing, in 2010, the world had changed: Barack Obama was president, America was emerging from a brutal recession, and the naked caving calendar included male butts for the first time. Titled, more inclusively, the “Texas Cavers Calendar,” the 2010 edition was printed in full color, and had a less provocative tone than previous ones. The photos were less Playboy and more Outside, if everyone in Outside forgot to wear clothes. Here were nude spelunkers scrambling through natural tunnels, climbing up ladders, and kneeling under stalactites.

Then came the 2018 calendar spearheaded by Lee, who was able to put his artistic stamp on the project. As he put it: “I wanted one that had awesome caves, and that happened to have naked people in it.”

Lee had no plans to put together another calendar until a TCMA organizer reached out to him earlier this summer. In recent years, TCMA’s main source of income has been public fundraising events it hosts at large caverns across the state. Due to COVID restrictions, those kinds of large, in-person gatherings haven’t been possible, and funds have been running low. The nonprofit wanted to know: would Lee and some other cavers be willing to revive the naked caving calendar to help raise some money for the group?

Lee agreed, and he and four other spelunkers-slash-photographers who had agreed to take on the project gave themselves a strict deadline: the calendar would have to be printed before the annual Texas Cavers Reunion this week, so they could sell it to their fellow speleology fans there.

Shortly after TCMA reached out to Lee, he and the other organizers put out calls for models on various Texas caving Facebook groups and email listservs. The response was overwhelming. While some users in a caving Facebook group wondered why this year’s calendar couldn’t be a wholesome and fully clothed celebration of spelunking, they were decidedly in the minority. Due to cavers’ aforementioned love of nudity, there were more would-be models than the calendar could use.

Over the next few weeks, the photographers led expeditions into the caves they’d selected. There, the models would strip down, and the photographers would set up and snap their shots. Afterward, over Zoom calls and email, organizers narrowed down their many photos to just over a dozen, a process Lee said was easy enough because they mostly agreed on which were the strongest photos.

But they could only include twelve images, and when it came time to select the last picture, the choice was between a shot of a couple apparently scrambling on top of a flowstone—a sheetlike stone structure caused by mineral deposits from flowing water—and a picture of a naked woman handing a backpack of caving equipment up to her partner on an upper ledge, her tidily groomed mons angled toward the camera like an experienced beauty model catching her best light. They hesitated. “If you have frontal nudity, it’s this gray area,” said Lee. “Now it’s open to someone’s interpretation as to whether or not it’s pornographic.”

But the flowstone was also controversial. At the time, a recent article on a climbing website had caused an uproar in the caving community over concerns about climbing on flowstones similar to the one pictured.

“Any time you’re climbing on formations you can damage them,” Lee said. Oil from a person’s skin can deposit on a formation and prevent water from settling there, he explained, thereby altering the natural development of the cave.

The backlash to the article, which detailed a couple’s climbing expedition in a cave in France, had been so strong that the editors posted a lengthy apology before eventually removing it from their site.

Unlike the couple from the article, the cavers in the picture weren’t actually climbing on the flowstone; it just looked like they were from the angle of the camera. But the group still worried the shot would draw more ire from the caving community.

Nudity aside, the broader question of what exactly cave preservation entails is an ongoing debate among cavers. How does one raise awareness and excitement about these delicate, subterranean wonders while at the same time allowing humans—clothed or otherwise—to enjoy, appreciate, and potentially damage them?

“It’s this balance between the two,” Lee says. “How much traffic do we allow through? How much damage do we allow people to cause, or how much do we protect it so that people can see it and can use it?”

It is hard not to make the case that almost every natural space on Earth would benefit from having humans leave it the hell alone. Wherever adventurers congregate en masse, they inevitably bring with them trash, pollution, damaging skin oils, and implements with which to graffiti hearts and curse words. And yet, how bleak to imagine a world in which humans are completely sealed off from nature’s most extraordinary creations—one where you can’t experience the wonderful and lonely sense of smallness that comes with standing in a place designed by forces older and greater than your mind can ever fully comprehend; a terrible world in which the only possible backdrops for tasteful nudes are man-made.

Ultimately, when it came to the 2022 Cavers Calendar, ecological concerns won out against light prudery, and the group decided to keep the full-frontal shot. Lee was satisfied with the decision. “It’s obviously not pornographic,” he said, and I nodded my assent.

It was unclear whether our servers agreed.