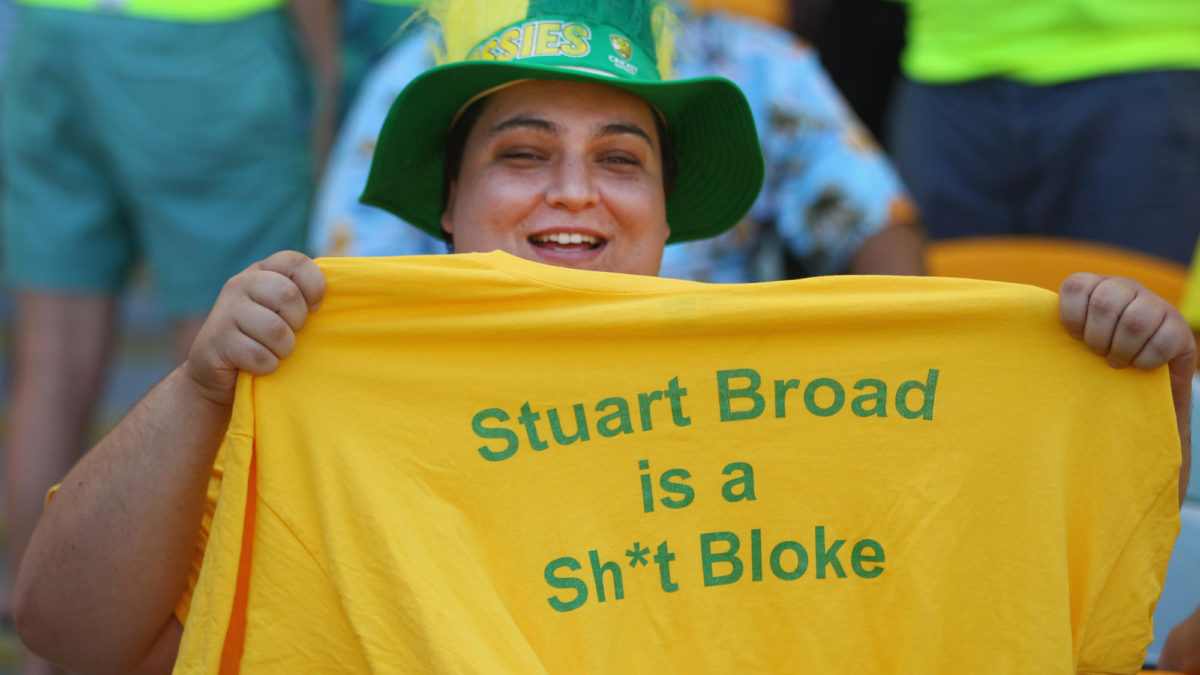 I’ve not played in the Ashes. Never been to England. And I get it, my international career was shorter than the legs of my favourite Tasmanian coach, Tim Coyle.

That’s the same Tim Coyle who former Australian fast bowler Lenny Pascoe once introduced to a crowd, over a live PA, as Tom Goolies ‘the former fast bowler for Tasmania’. Goolies is four foot three and is obviously a wicket keeper and jockey for hire. Not a menacing quick.

But hostile crowds aren’t exclusive to the international arena. And if you are a player without a plan in hostile territory, then they’ll eat you alive. “Eat you alive” is code for pick apart your psyche, the size of your bum, family history and throw stuff at you with the intent to hurt.

My plan to navigate this hostility was simple and largely effective: Find the kids in the area where I was fielding – always fine leg/third man/sweeper and always in front of the wet area – and share with them the drinks and the lollies that sat in the eskies that lined the ground for the players to hydrate from.

Sometimes, if the opportunity presented itself, I’d steal cricket balls from the opposition kit bag and give those away too.

How can you yell at the guy who has just given those cute kiddies free food, drink and $160 turf match balls?

As a plan – more often than not – it de-escalated any volatility that the opposing crowd may have had towards my green shirt.

There was only one game where this failed. It was a day/night game at The Gabba, and to be honest, I could have brought the entire state of Queensland new RM Williams stickers for the back of their toad smashers, and still this crowd would not have been won over.

Why? 25,000 volunteer fire fighters, attending on free tickets, all sitting on one side of the ground, all smashing black rat cans, and all agreeable to the fact that I was a two headed butler whose free lollies and drinks should be used as missiles, with my head being the Sea of Japan.

There was a time you could go to a domestic/international cricket game and drink full strength beer, or vodka, or Bundy and Coke. And people came. Maybe because you could do, and say, and throw, pretty much whatever you wanted.

But then Cricket Australia and venues cut off the full-strength tap, the people stopped coming and, of course, the level of behaviour improved because no-one was there.

Wondering where the crowds went? Mid-strength and light as an offering have turned people away; unless you can afford the yearly subscription to the members area or hold elite social standing by receiving invitation to masquerade events and Cricket Australia junkets where your caviar is paired with a Blanc de Noir.

As an aside, I remember a meeting with Cricket Australia in 2009, when they tried to implement the split innings concept as the saviour of domestic 50 over cricket.

We were presented a Cricket Australia histogram that very prettily highlighted the declining crowd numbers. To me, public school ‘n that, the answer in this droopy graph was obvious – “When did you stop serving full strength beer at domestic games,” I shrieked in my nasally tone from the back of the room.

The answer? At the exact time the crowds started to decline. But that was a coincidence, because I’m just a dumb quick who played the drums at my asbestos-ridden public school.

So instead of letting everyone get pissed, we played split innings, and domestic cricket died an embarrassing death.

Part of me understood the need to better control the behaviour. I’ve had some things said to me about my family, my then un-born children, and most disappointingly, the size of my bum, that I couldn’t even say out loud in a room filled only with myself.

During a home game at the goat track of Devonport, my mother had to move from her seat because the things being said to me were so disturbing. Mum has a sense of humour, and she knows what happens when her son has dished up four overs for 43, but it got so bad it broke her and she had to depart.

So, you can imagine how us olden days type cricketers look at the current back and forward between England, Piers Morgan, Geoff Boycott versus Timmy Paine and kind of scoff at the word ‘hostile’ being used to describe a group of people getting lippy on mid-strength beers.

I am being a little facetious there, of course, because there is nothing funny, or weak, about some of the stories shared by former and current players with regard their mental health and the impact crowd noise has had on them throughout the years.

But the bulk of those guys are from the previous era, where boozing and abuse walked together down the aisle towards holy matrimony. The flow of booze led to some abhorrent behaviour, and the positive impact on our crowds accepting a higher social standard is worth the turning off of the full strength taps and resultant declining crowd numbers.

But the flip side of this in the NOW is that the biggest noise, and perhaps an even larger problem, seems to come from the media and social media trolls.

The in-game crowd behaviours are now mandated by everyone in attendance with hotlines for racism and other unacceptable behaviours, while every smart phone in the venue is in the holster in case something happens.

I mean, it doesn’t necessarily need to be interesting to be shared to Insta, but know that if you make a goose of yourself, and overstep the mark by being abusive, you will feel the wrath of the media and social media tag team.

It is a layer the players from the booze-crowd-abuse-era never had to cop. Media and social media abuse.

And it’s largely why Geoff Boycott is right, the Australian media and public can be cruel. You only need to look at 2013 when England toured here. The Courier-Mail removed Stuart Broad’s head from all photos and wouldn’t even call him by name.

He was the ‘medium pace bowler’ or the ‘Phantom Menace’ as part of a Broad Ban policy, solely instigated by then coach, Darren Lehmann, who requested the Australian public make Broad’s time here a living hell because he refused to walk off the ground when the umpire said he didn’t have to.

But it’s also what makes Geoff a hypocrite, given his country’s failings in their vaccination rates for gingivitis. WHAT! That’s not what makes him a hypocrite, it’s what makes the Poms impossible to share an ice cream with.

The Barmy Army and their songs filled with bullying, and the English tabloids, are what makes him a hypocrite. My bad.

We can all be cruel, but what we can’t be is too pissed and abusive at the cricket. Because we need to save that type of unacceptable behaviour for the anonymity of our social media accounts to save us from our public drunkenness.

Which would you rather?

Poison is ugly, and picking it is harder than fielding a cricket ball as you dodge dirty nappies.