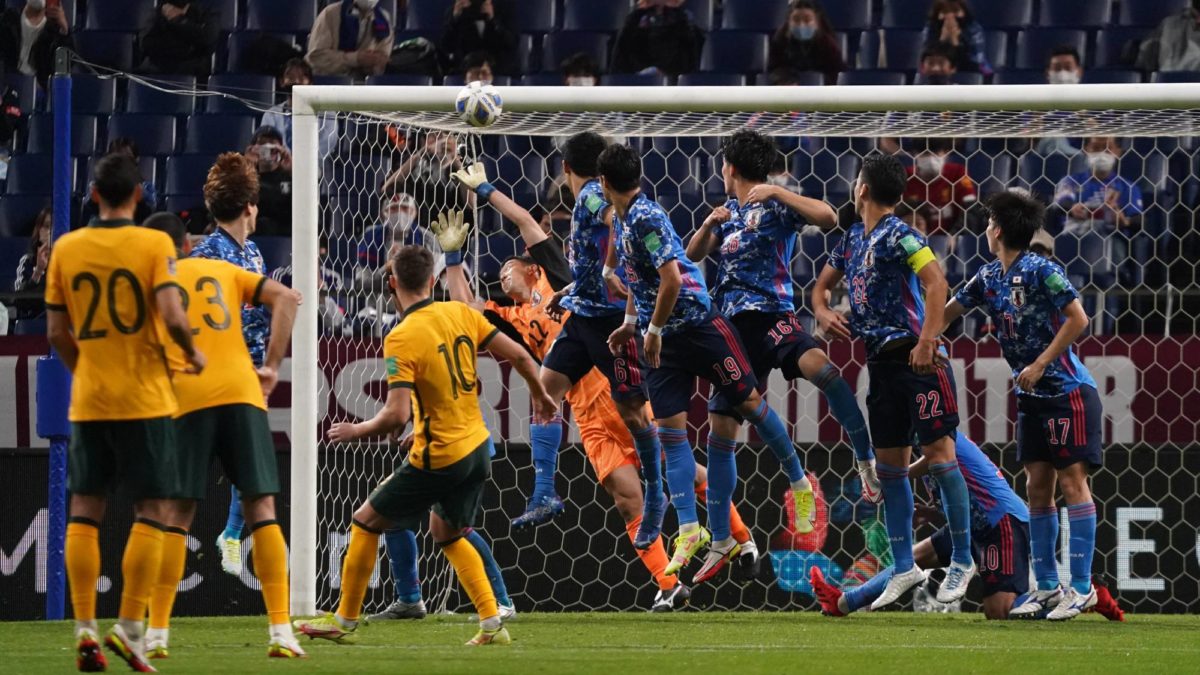 Australia have now gone eight games in 12 years without a victory over Japan, and their gutting 2-1 World Cup qualifying loss in Saitama will hurt as much as any of their failures.

Having overcome a terrible first half to get level through Ajdin Hrustic’s stunning, dramatic freekick, Socceroos defender Aziz Behich, also at fault for Japan’s opener, turned the ball into his own net after Mat Ryan had pushed a deflected shot against the post.

“It hurts, it would have been great to keep momentum going but now it’s important how we respond,” said Ryan.

But Japan were worthy winners and it seems a massive stretch to suggest anything Arnold’s team produced went close to “great” or even “intelligent” aside from Hrustic’s mathematical precision to get his shot over the wall and keeper, then under the bar.

Ajdin Hrustic with a brilliant free-kick to bring us level!

Having been dominated, Australia will rue the two points they presented to Japan as much as the two they dropped.

Japan’s scrappy winner, four minutes from the end, left Australia on nine points from four games in the group with Saudi Arabia, who play China at 4am AEST Wednesday, on nine from three and Japan six from four. Australia play Saudi Arabia next on November 11.

Australia went into the match on a World Cup record qualification winning streak of 11 in this campaign, and knowing a win could go a long way to ending Japan’s chances of automatic qualification for next year’s World Cup in Qatar.

But a trip to Japan was always going to be a step up in intensity. There was also the matter of a depressing record against their rivals of late.

Australia’s most recent win was in June 2009 and Australia have never won in nine attempts in Japan.

The table pressure was clearly on Japan, who were six points behind Australia and Saudi Arabia at kickoff, but they seemed the more composed team from the start and Socceroos were sloppy through the centre of the pitch.

Socceroos coach Graham Arnold made two changes from the team that beat Oman 3-1 on Friday, resting Rhyan Grant for Fran Karačić, who has never touched foot in Australia, and replacing fatigued Awer Mabil with Aaron Mooy.

Arnold would have wanted Mooy to give Australia some solidity on the ball in midfield alongside Tom Rogic, but the Socceroos were bounced off their game by an intense Japanese performance.

Japan made early inroads down Australia’s left side, seemingly targeting left back Behich, and it was his mistake that led to the opening goal on eight minutes.

A ball was deflected as it came from Japan’s left and Behich waved his foot in a poor attempt to clear. Ao Tanaka found himself with time and space and kept his composure to drive the ball across Ryan and inside the net.

“We turned over the ball and they do have quality Japan but we gave them a leg up,” said former Socceroos World Cup representative Luke Wilkshire on the 10 coverage.

“It’s a disappointing goal. It’s a deflected cross but Behich just got it all wrong, he’s misread it. It’s a great finish but he’ll be very disappointed with that defending.

“It’s been some of those defensive lapses that’s caused us problems on that left side, their right. Behich started a bit shaky and once Japan get that goal they get a little bit of a spring in their step and they could sit and play on the counter.”

Australia snatched at a few half chances, with Martin Boyle unable to get into the game, and Japan should have gone two ahead on 34 minutes.

Hrustic, one of several Socceroos initially playing below their best, was robbed in midfield and Yuya Osako tore straight at a frantically back pedalling Australian defence. His mazy run confounded all of them and the only thing missing was the finish as he scooped his shot wide of Ryan, but also of the post.

Australia were reeling, but four minutes before halftime Adam Taggart, on a run of 12 games in all competitions without a goal, was denied a drought breaker by a sensational save from Shuichi Gonda.

Played in on the right, Taggart drove a fierce shot at the near post and Gonda’s wrist guided the ball onto the woodwork. The rebound fell for Mooy but his attempt was blocked.

It sent Australia to the dressingrooms with some hope that they could get something from the game. Five minutes into the second half, Mooy found space on the left and fizzed a long range effort narrowly wide.

Japan’s Liverpool forward Takumi Minamino thought he should have a penalty as he raced into the box to meet a cross, only to crash over in a slight tangle with Jackson Irvine.

Mooy and Rogic had their best combination of the opening hour to set Rogic up for a chance at the top of the box but his finish was high and wasteful and soon after Mooy ran out of steam and was replaced.

Australia were grabbing the ascendancy and thought they’d won a penalty when Boyle surged down the right and cut back superbly for Hrustic. The Australian was fouled on the very edge of the 18 yard box by Hidemasa Morita.

The referee pointed to the spot and Boyle prepared for the penalty before VAR reversed the decision and awarded the freekick instead to the immense, but brief, relief of the home side.

“I don’t know how you get an accurate reading out of that to be brutally frank,” said commentator Andy Harper after countless, seemingly inconclusive replays.

Never mind, Andy: Hrustic stepped up and curled his stunning freekick over Gonda and into the net off the cross bar.

“The Socceroos midfielder who is emerging of a star of the future is a star of tonight,” said Harper. “He plunges a Samurai sword into the heart of Japan.”

But it wasn’t the Japanese who went away heartbroken.

Japan surged again, getting spurning a golden chance to go back in front with 15 minutes to play after intercepting an underhit pass out from Ryan, who redeemed himself with two brilliant reaction saves.

With four minutes to play he did well to paw a deflected shot onto the post and was stunned to turn and watch it bounce back off the post and from Behich’s knee into the net.

“I thought it was a great spectacle both teams had a go at each other,” said Socceroos coach Graham Arnold.

“We were unlucky to hit the post and concede a deflected goal. We played some great football, intelligent football, but at the end of the day it wasn’t meant to be.”

Japan deserved their win, and delighted a home crowd that was about a third full due to Covid restrictions.

Australia have played all four games away from Australia and Arnold called on Australian governments to help give his team the boost Japan received on Tuesday by playing in front of 16,000 fans.