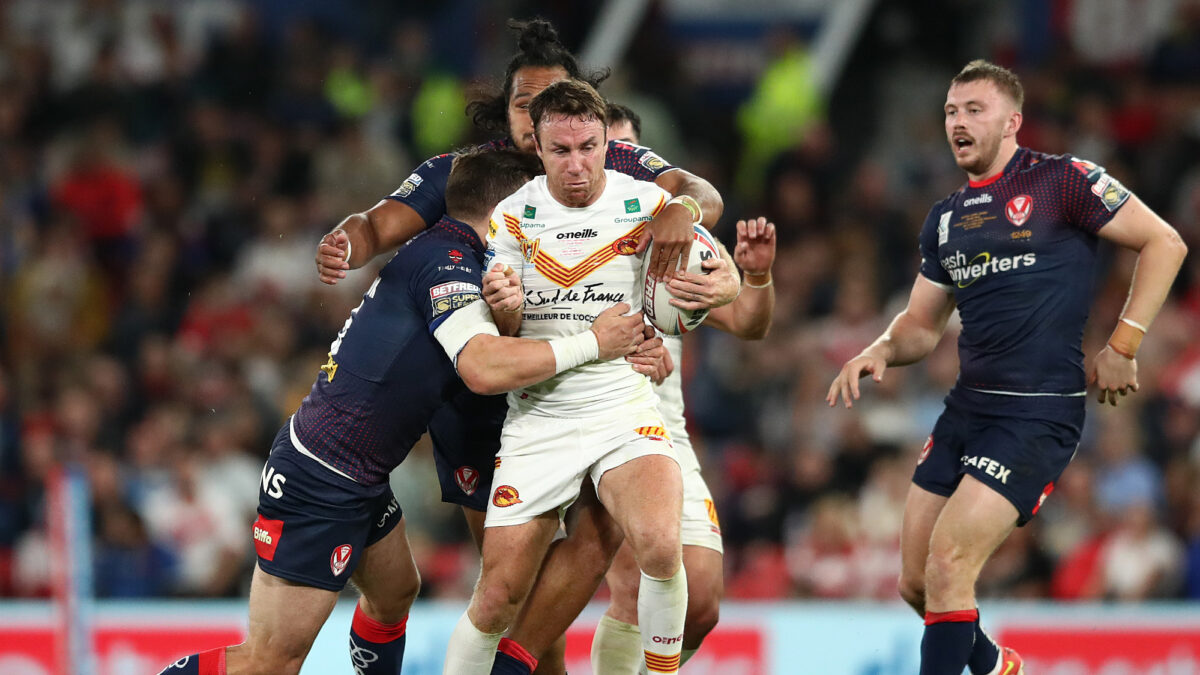 James Maloney has been denied a farewell premiership gift after his Catalans Dragons side went down to St Helens in the Super League grand final at Old Trafford on Sunday morning (AEST).

A two-time premiership winner with the Roosters (2013) and Sharks (2016) in the NRL, Maloney was hoping to win a third premiership medal and first outside of Australia, but his Dragons had to settle for a second-place finish in what was their first Super League Grand Final.

The French-based side had to play their entire season in England owing to COVID-19 travel restrictions, but nonetheless did well to finish the season as minor premiers and reach the Grand Final for the first time since entering the competition in 2006.

After last year’s Grand Final was played behind closed doors at KCOM Stadium in Hull, the decider was returned to Old Trafford, the home ground of EPL side Manchester United, with an attendance of 45,177 recorded.

The Dragons found St Helens a mountain too far to climb in the decider, losing 12-10 with former Wests Tigers centre Kevin Naiqama scoring two tries and winning the Harry Sunderland Trophy (the Super League’s equivalent of the Clive Churchill Medal) as best on ground.

He scored the only try of the first half as the Saints led 6-4 at half-time, with two penalty goals from Maloney keeping the Dragons in the hunt at the long interval.

Dragons forward Mike McMeeken scored ten minutes from the resumption to put his side in the lead, just before which Saints winger Tommy Makinson was sin-binned for a high shot on ex-Newcastle Knight Sione Mata’utia.

A second try to Naiqama followed by a conversion from Lachlan Coote saw the Saints reclaim the lead 12-10, which they would hold to the full-time siren.

While he will return to Australia for family reasons, he has indicated he is likely to retire but remains open to rejoining the NRL, where, apart from the Wests Tigers, he also represented the Newcastle Knights and Penrith Panthers.

For Roby, it was his fifth premiership title with St Helens after also featuring in their 2006 and 2014 premiership sides, while Makinson, Amor, McCarthy-Scarsbrook, Walmsley and centre Mark Percival were also part of the latter side.

Percival could’ve also won a fourth premiership ring, but he missed most of last season due to a shoulder injury.

It was also Coote’s final game for St Helens before he switches to Hull ahead of the new Super League season, expected to start sometime in the middle of March next year.

By winning, the Saints became the joint-most successful side in Super League history with an eighth premiership, joining Leeds who also won that many with their most recent title coming in 2017.

They also joined the Rhinos as the only side in the competition’s history to win a hat-trick of titles, theirs coming between 2007-09.

In fact, since the Super League competition was formed in 1998, only four clubs – St Helens, Leeds (eight titles each), Wigan (five) and Bradford (three) – have won a premiership.

This contrasts with the National Rugby League, which has produced twelve different champions with only the Eels, Raiders, Titans and Warriors (of all active clubs) having not yet won a title since our competition was formed also in 1998.

Only the Titans have not yet contested an NRL Grand Final, coming closest in 2010 when they reached a preliminary final.

As for James Maloney, it was a heartbreaking end to a distinguished rugby league career which started at the Melbourne Storm in 2009 and saw him become one of the great journeymen, representing four clubs in the NRL and then the Dragons in the Super League.

He joined the likes of Ivan Cleary, Brad Fittler, Matthew Bowen, Justin Hodges, Billy Slater and most recently Benji Marshall as those who came up agonizingly short of winning a title in their final game of rugby league as a professional player.

It was also his second Grand Final defeat as a player after being part of the New Zealand Warriors side that lost to the Manly-Warringah Sea Eagles in the NRL decider exactly a decade ago.

In between, as mentioned above, he was part of the Sydney Roosters side that triumphed under rookie coach Trent Robinson in 2013 while he also steered the Cronulla Sharks to their first title in 2016 before spending seasons 2018 and 2019 at the Penrith Panthers.

St Helens’ victory means that, as it stands, they will play NRL champions the Penrith Panthers in the World Club Challenge, but after this year’s edition (in which they would’ve faced the Melbourne Storm) failed to proceed, whether the 2022 edition does remains to be seen.

If the Panthers are sent overseas, this would mean, at best, a seven-day home quarantine upon their return to Australia, that’s provided all of their travelling party are fully vaccinated against COVID-19, or at worst two weeks in hotel quarantine, potentially impacting their pre-season.

Likewise, if the World Club Challenge is to be played in Australia, the Saints would have to quarantine for two weeks upon their entry into the country, and the match would either be played at one of BlueBet Stadium, the Panthers’ home ground, or even CommBank Stadium (formerly Bankwest Stadium) or Stadium Australia.

To finish off, congratulations to St Helens on becoming just the second side in Super League history to achieve a premiership hat-trick, and the joint-most successful side in the competition’s history; and commiserations to the Dragons, who did well to reach their first Grand Final despite having to play the majority of the season in Great Britain.