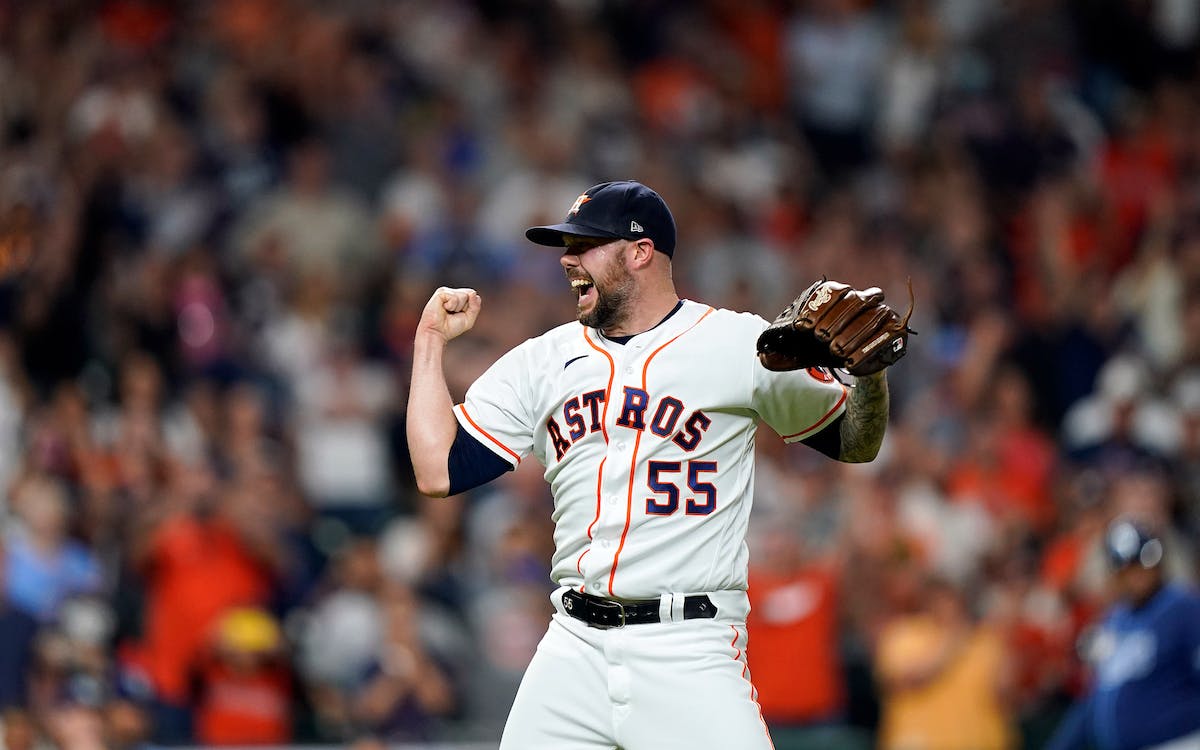 Only nine teams in baseball history had made the playoffs in five straight seasons prior to this year. After clinching the AL West division title last night with a 3–2 win over the Tampa Bay Rays, the 2021 Astros just became the tenth. The team earned its postseason ticket by leading all of Major League Baseball in runs batted in, hits, and batting average. They’re also tops in the American League in run differential. Simply put, the Astros have scored a ton this season and have stopped opponents from crossing the plate.

Despite the team proving itself a worthy title contender, rival fans still angry about the team’s 2017 sign-stealing scandal have bemoaned Houston’s success all season long. But before addressing the most bitter corners of baseball fandom, let’s note what has made this year’s team special.

Much of the team’s production has come from Astros’ talented, young outfield, in particular Kyle Tucker and 2019 Rookie of the Year Yordan Álvarez. Tucker leads the team in OPS (on-base plus slugging) at .902 and has a WAR (wins above replacement) of 5.0. Meanwhile, Álvarez became the fastest player in the expansion era to drive in one hundred runs earlier this year, and he leads the team with 32 home runs. Only Joe DiMaggio has had more extra-base hits over his first hundred games than Álvarez has.

The Astros have also gotten strong performances from a rotating cast of minor league call-ups. At the start of the season, the team wasn’t sure who might fill the shoes of All-Star center fielder George Springer, who left for the Blue Jays in the offseason. But Chas McCormick and Jake Meyers stepped up, showing agility in the field and giving the bottom of Houston’s lineup a dangerous edge. Then, José Siri arrived from Triple-A and things got wild, as he blasted two homers and batted in five runs in his first career start on September 13. After worrying that they might not be able to withstand losing Springer, the Astros are approaching the end of the season with more talent than the outfield can handle. Young pitchers like Framber Valdez and Luis Garcia, signed from the Dominican leagues, and José Urquidy, signed out of Mexico, have also delivered for the team.

And not one of the eight players mentioned above was on the roster in 2017, the season marred by cheating.

Marquee names and 2017 holdovers José Altuve and Carlos Correa (who currently leads the majors in defensive WAR) have been very good this season, but they’re only a part of the team’s continued success. Even so, that hasn’t stopped home crowds from relentlessly booing anything navy and orange when the Astros come to town.

After the Astros clinched a playoff berth, a predictable wave of bitterness was unleashed on social media. The first reports of the Astros’ sign-stealing came out in the Athletic during the 2019 offseason, and then COVID-19 made it impossible for opposing fans to vent their ire in a pandemic-shortened 2020 season that was played entirely in empty stadiums. That meant this year would be fans’ first chance to heckle Houston in person, and they’ve made the most of the opportunity while continuing to lambaste anything associated with the team online. Posting trash-can emojis—a symbol of the Astros’ system of banging trash cans to relay stolen signs in 2017—has become fans’ go-to taunt in a season of major-league trolling.

All season long, fans and players around the MLB have chirped at the Astros, but in Houston, many fans are tired of the narrative. The team got caught cheating—that’s inexcusable and deserving of condemnation. The transgressions also occurred four years ago, and while that may taint the franchise’s 2017 World Series win, it has nothing to do with the winning baseball the Astros have played this season. Astros fans don’t feel guilty about rooting for this team, and they shouldn’t. By and large, Astros fans have moved on, while the fans booing the team, at this point, are heckling laundry instead of actual players.

It’s not just the fans, though. Throughout the season, the Astros have managed to get under the skin of some of baseball’s best and most prominent teams and players. Back in August, the Dodgers drew the largest attendance at any MLB stadium this year, with 52,754 fans showing up in hopes of seeing the home team dole out some comeuppance to Houston. The Astros won 3–0. The crowd got ugly, with multiple fights breaking out and Dodgers security violently breaking up clashes. Even when the Dodgers won the second game to split the short series, Correa’s monster home run off Joe Kelly, who famously mocked him last year, felt like a moral victory.

In July, as the Yankees’ Aaron Judge rounded third base after hitting a solo home run off Zack Greinke, he pulled his jersey a little tighter. The gesture looked like a stab at Altuve, who’d made a similar motion after a walk-off homer in game six of the 2019 ALCS that put the Astros in the World Series. Judge’s move referred to never-proven (and debunked) rumors that Altuve had worn a buzzer under his jersey to notify him of what pitches were coming before he hit that series-winning shot.

On social media, Yankees fans reveled in Judge’s troll maneuver, but their moment was short-lived. In the following day’s game, Altuve clapped back with another walk-off homer, this one completing a six-run, ninth-inning comeback. When his teammates received him at home plate, they ripped his jersey from his body to show there was no buzzer. Altuve has walked off the Yankees so many times that some have begun to refer to him as a Yankee killer. Meanwhile, the Yankees have been chanting “F— Al-tu-ve” at games this season—even when they aren’t playing the Astros. We can probably agree that coordinated chants cursing the name of a player that the Yankees aren’t even playing is odd fan behavior.

A city of 2.3 million, Houston is one of MLB’s larger markets, but it’s odd for juggernauts like the Yankees and Dodgers to let any rival live rent-free in their heads, especially considering how pricey real estate is in New York and L.A. The Astros seem to have accomplished something bigger than a single win or playoff appearance—they’ve elevated themselves to a status that makes Houston a perennial storyline. Perhaps that’s the price of infamy, but fans across the country probably wouldn’t care about 2017 if the Astros weren’t still competing for titles in 2021.

While some fans focused more on jeering the Astros than supporting their own teams—and paid for Astros merch to defile—Houston has simply continued to win. In addition to the team’s streak of reaching the playoffs, the Astros’ four consecutive trips to the League Championship Series is an achievement that’s only been matched four previous times in MLB history. If the Astros return to the ALCS this year, they’ll be the third team to accomplish a streak of that length.

In the end, however, rings mean more than pennants. The Astros of recent years won’t be considered a dynasty without multiple World Series wins, especially with 2017’s trophy stained by scandal. Despite a season full of superlatives, the team has slumped down the stretch and will need to find a spark to overcome American League rivals and whichever team emerges from the stacked National League, where both the Dodgers and the Giants have won more games, hit more home runs, and posted better pitching stats than the Astros. If the Astros survive baseball’s postseason gauntlet and emerge champions again, it’ll be the sweetest moment yet in a half-decade of success, and fans in Houston should be damn proud.