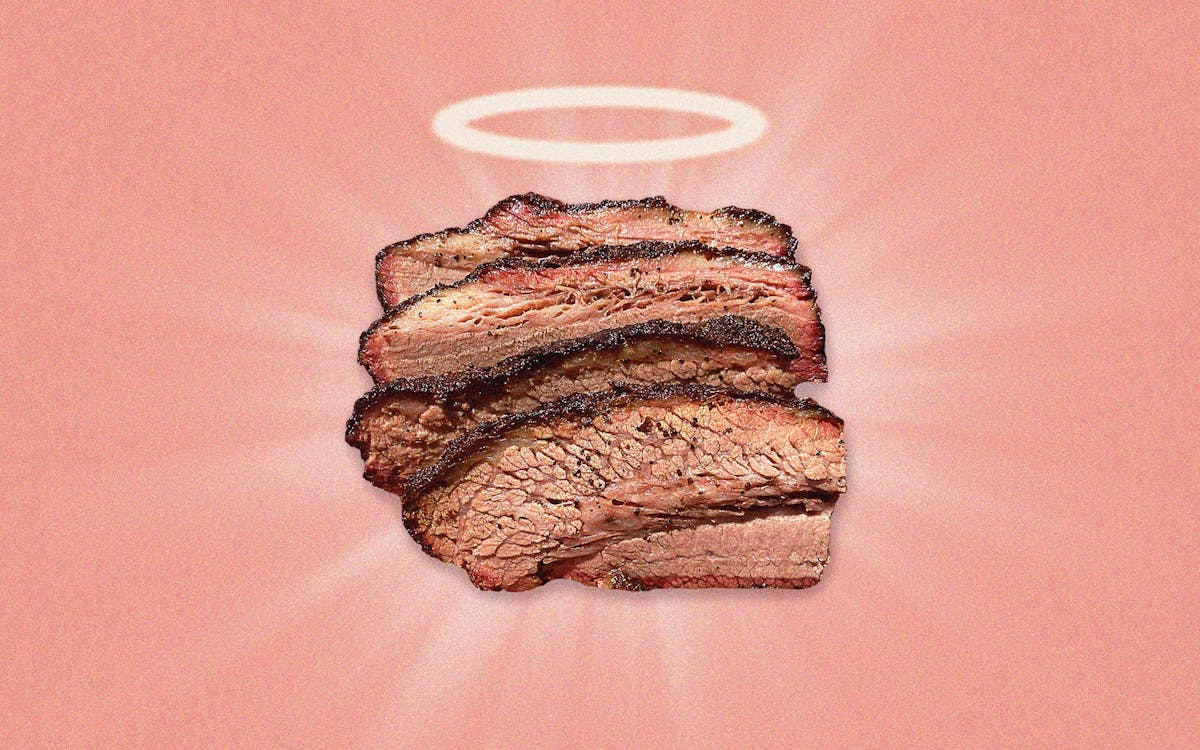 Every four years, the Texas Monthly staff and I spend several months searching for the state’s best barbecue. Early in the process of building the new list of our 50 Best Barbecue Joints, which will drop on October 18, the goal was to separate the wheat from the chaff. This year, there was a whole lot less chaff than in 2017. Making great barbecue is hard, and there are plenty of ways for a pitmaster to foul up. Back then, the most frequent mistakes involved brisket. The meat was often undercooked and tough, or tasted like a chain-smoker’s ashtray thanks to the dirty smoke from a poorly maintained fire. This year, briskets across Texas were so delicious—and so similar—that we trained ourselves to look for small flaws just to differentiate among the competitors. After 411 joints tested, I can confidently report that our favorite smoked meat is so reliably excellent in all parts of Texas that it no longer feels like an achievement. Texas brisket has peaked.

This is not a lament. Rather, it’s a recognition of our privilege. In the early 2000s, praiseworthy smoked brisket was the bovine equivalent of unobtainium for entire regions of Texas. Just ask the good folks who lived in Beaumont before 1701 Barbecue quenched that city’s drought late last year, or in Lubbock before Evie Mae’s sparked a regional brisket boom after opening in 2015. Now, the good stuff is all around us. From the Panhandle to the Rio Grande Valley, and from the Golden Triangle to the Mountain Time Zone, high-quality sliced brisket is easily accessible to just about everyone (sorry, Duval County) in Texas.

I used to bite into the rare slice of perfectly smoked brisket and taste an epiphany. But one can only experience so many miracles in this lifetime, and they feel a lot less miraculous when I eat a divine slice every day of the week and three times on Sunday. Those who save their barbecue outings for rare special occasions, or insist the best smoked meats in Texas come from their own backyards, may not concur. But I’d bet a lot of the most-avid barbecue hounds and professional pitmasters are nodding their heads in agreement right now.

I can tell you exactly when this path to excellence began: December 2009, when Aaron and Stacy Franklin started selling their smoked brisket in Austin. The barbecue community noticed, and the consistently tender and juicy slices made Franklin Barbecue world-famous. Copycat joints—I won’t name names because there are too many—started to pop up. Then Franklin wrote down all of his smoky secrets in Franklin Barbecue: A Meat-Smoking Manifesto, published in 2015. He had written an instruction manual and handed it to his competitors. When the most famous brisket cook the world has ever seen tells you exactly how to replicate his cash cow, enterprising pitmasters are going to do exactly that. Often, it led to the same result: salt-and-pepper-seasoned, post oak–smoked, butcher paper–wrapped, USDA Prime–grade brisket perfection.

Much of our current glut of superlative smoked brisket comes from barbecue joints that opened in the post-Franklin barbecue world. The goal, as some pitmasters told me explicitly (and others made obvious simply by transferring a butcher paper–wrapped brisket from an electric warmer to a cutting block), was clear: make brisket the way they do it in Austin. Some have added their own seasonings and techniques along the way, but a whole lot of Texas brisket tastes like we’re eating a cover song. Granted, it’s a cover of the greatest barbecue tune ever written.

Now that scrumptious brisket is everywhere, the inevitable has happened: eaters have gotten spoiled. I saw a recent Facebook post complaining that the version served at a well-respected barbecue joint was “boring” because it tasted like so many other slices around the state. With an ever-decreasing number of mediocre (or even bad) barbecue joints around us, a great meal tastes less special. It’s as if the world’s best carne asada were served at every Taco Bell.

For the most part, this is great news for brisket lovers, especially if assessing and ranking barbecue joints isn’t part of your job. Folks from outside Texas—I’m looking at you, Kansas City—can still be rewarded with a revelation that the undercooked and over-seasoned smoked brisket they’ve been eating and defending for decades is a cruel joke. Meanwhile, the locals from Houston to Fort Worth are left to argue if this joint is two percent less great or five percent better than the place across town.

At the risk of putting myself out of work, it’s hard to imagine brisket getting much better than what we have right now. Pitmasters have had a decade to improve upon the gold standard, and while some may argue that a few now smoke it as well as or better than Franklin, I posit that a new standard has not yet been set. With the simple tools of barbecue—meat, smoker, wood, and seasoning—there’s just not much room left to raise the bar, unless you spend hundreds of dollars on a full-blood Wagyu brisket imported from Japan.

Fortunately, Texans’ barbecue options aren’t limited to brisket. Thanks to a young and diverse collection of pitmasters willing to experiment with our smoked-meat culture, exciting versions of ribs, sausage, chicken, and just about every other protein (and a few vegetables) abound in the state. I suggest renewing your appetite with a smoked carnitas taco from Austin’s Rollin Smoke, the gochujang pork ribs at Eaker Barbecue in Fredericksburg, or even an old-school pork steak from Kolacny Bar-B-Q in Hallettsville, a joint that no longer bothers with brisket thanks to price increases.

Someday soon, one or another of these innovative pitmasters will find an exhilarating new version of our sacred cow. In the meantime, an onslaught of brisket bliss is headed your way in our November issue, which should keep us Texans comforted by the fact that the next slice of brisket we eat is more likely than not to be a great one.