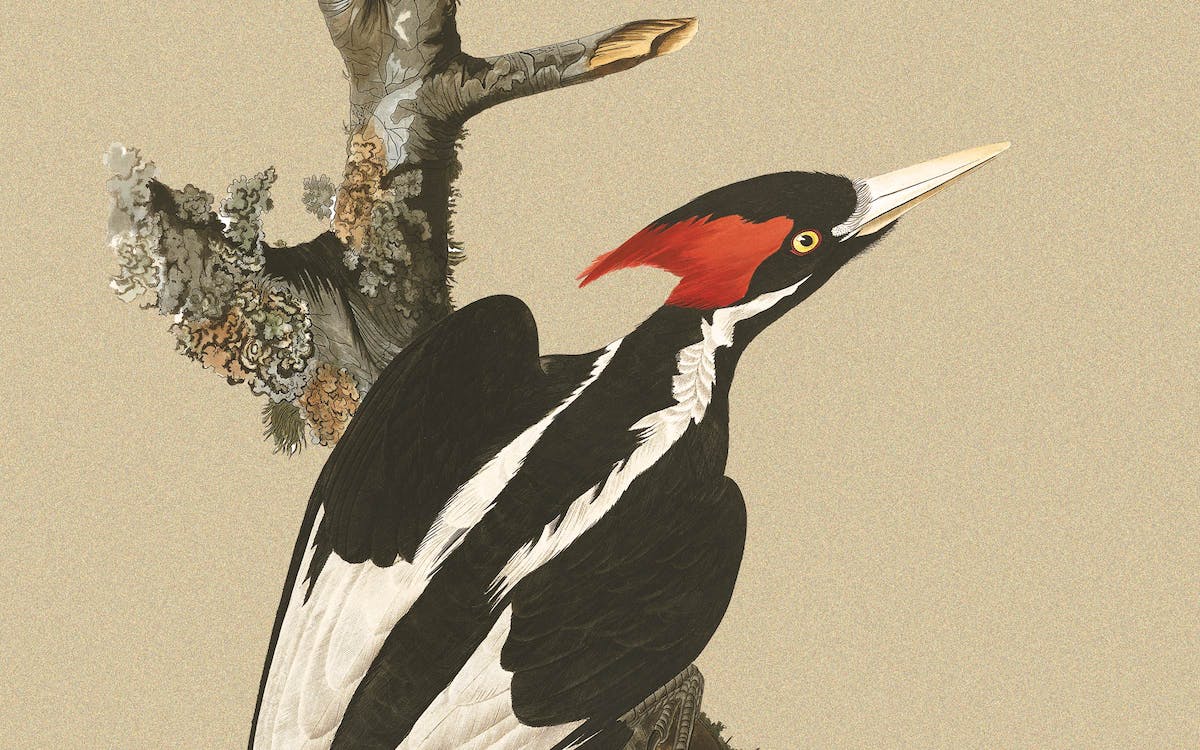 In 1837, John James Audubon sailed from New Orleans to the Republic of Texas on a quest to collect, study, and paint the birds of North America. Near the mouth of Buffalo Bayou, not far from the field where the Battle of San Jacinto had been fought just a year earlier, Audubon encountered a beautiful bird species. It was about the size of a crow, with glossy, black and white plumage, and the males wore vivid, crimson-colored crests. “The flight of this bird is graceful in the extreme,” Audubon marveled.

He gathered several specimens in spring 1837, the first time the ivory-billed woodpecker had ever been reported in Texas. Sadly, the bird would not be around for long. The last confirmed ivory-billed woodpecker in the state was found in 1904, near an oxbow of the Trinity River north of the East Texas town of Liberty. The nation’s last irrefutable report came four decades later, in 1944, in a northeastern Louisiana river bottom.

This week, the woodpecker was among 23 species declared extinct by the U.S. Fish & Wildlife Service.

“The ivory-billed is gone,” says Cliff Shackelford, state ornithologist for the Texas Parks & Wildlife Department. “This announcement is no surprise. Is it unfortunate? Heck yeah, it’s unfortunate.”

At least one other Texas species is on the list: The San Marcos gambusia, a small fish endemic to the San Marcos River, also appears to be gone forever.  (A sixty-day public comment period is now pending before the species are permanently axed from the Endangered Species Act.)

In the 1980s, Shackelford searched for the ivory-billed woodpecker across rural East Texas. He paddled a canoe and tramped through marshy forests, often playing a recording of the bird’s calls in hopes of a response. None ever came. Shackelford began to think of the bird as a forest ghost. On the rare occasions when he did hear that someone had spotted one, he was skeptical. Birders often confused the ivory-billed with a look-alike, the pileated woodpecker, which is abundant throughout the eastern United States.

“Early in my career, I would chase the more credible sightings, and I just got tired of it,” Shackelford says. “I’d like to be a believer, but I’ve just not seen any evidence that it is still here.” It often takes decades of searching, based on all available scientific evidence from around the country, before a species is officially given up as lost.

The nation’s largest woodpecker, the ivory-billed was nicknamed the
“Lord God Bird” because those lucky enough to catch a glimpse supposedly exclaimed “Lord God!” It was also a finicky creature whose requirements for survival became increasingly difficult to fulfill as the East Texas wilderness disappeared, one felled tree at a time. The bird’s diet was restricted to the insects and larvae found in dead or dying trees, with each breeding pair requiring at least 1,600 acres of unbroken home range.

“We just don’t have that anymore,” Shackelford says. “We’ve fragmented the land, and we don’t have mature timber.”

Loggers cleared much of East Texas’s upland forests in the 1880s, pushing the woodpecker into the bottomlands, where hardwood trees grew in floodplains along rivers and streams, which were widely destroyed by the construction of reservoirs in the twentieth century. Other bird species that are rapidly declining in Texas’s bottomland forests include the prothonotary warbler, a cheerful yellow songbird the American Bird Conservancy describes as “like a bit of spring sunlight”; and the rusty blackbird, whose nationwide population has plummeted by an estimated 80 percent or more over the past half-century. The state has also had some success stories, most notably the whooping crane, which has rebounded from fewer than twenty birds in the 1940s to five hundred or more today.

While the ivory-billed was something of a white whale for birders who dreamed of seeing one, the other newly extinct Texas critter was even more obscure. The San Marcos gambusia, an inch-long fish with lemon-yellow fins, was one of three species of gambusia, also called mosquitofish, in Central Texas’s upper San Marcos River. The unassuming, minnow-like fish wasn’t discovered until 1968, when a University of Texas biologist spotted it in a stretch of the river about five hundred yards upstream and five hundred yards downstream of an Interstate 35 bridge—the only place on the planet it has ever been found. The last reported sighting was in 1983.

“This is a problematic species,” says Timothy Bonner, a professor of aquatic biology at Texas State University in San Marcos.

No one knows for sure, but it’s possible that the San Marcos gambusia has been gone for quite a while (or perhaps even that it was never a distinct species to begin with). The 1968 population estimate put its numbers at just a thousand in existence; in the 1990s, scientists labored unsuccessfully to find it. Twice in the past decade, Bonner led major projects to assess the river’s gambusia. No one was able to locate the fish. “We haven’t seen anything that looks like this organism as it was initially described,” he says.

Bonner also doesn’t quite buy into the most widely cited reasons for the fish’s extinction, such as habitat loss and reduced spring flows. The other two species of gambusia found in the upper San Marcos River—the western mosquitofish and the largespring gambusia—are still doing fine, he notes, as are nearly all the other fish in the upper San Marcos: “This is still a very healthy river system.” He’s also optimistic that the gambusia’s extinction won’t lead to relaxed protections for the river, since it’s still home to other federally protected species, including the fountain darter, a tiny fish that lives in the headwaters; and Texas wild rice, an aquatic grass.

The bigger picture is bleak, however. Worldwide, extinction rates for plant and animal species are roughly one thousand times higher than they were before humans came along, with as many as one million species at risk of extinction due to climate change and habitat loss. In Texas, nearly all the land—at least 95 percent—is in private hands, so enlisting individual property owners is key to protecting the species that remain.

“At this point,” Shackelford says, “we need to save what is still out there.”