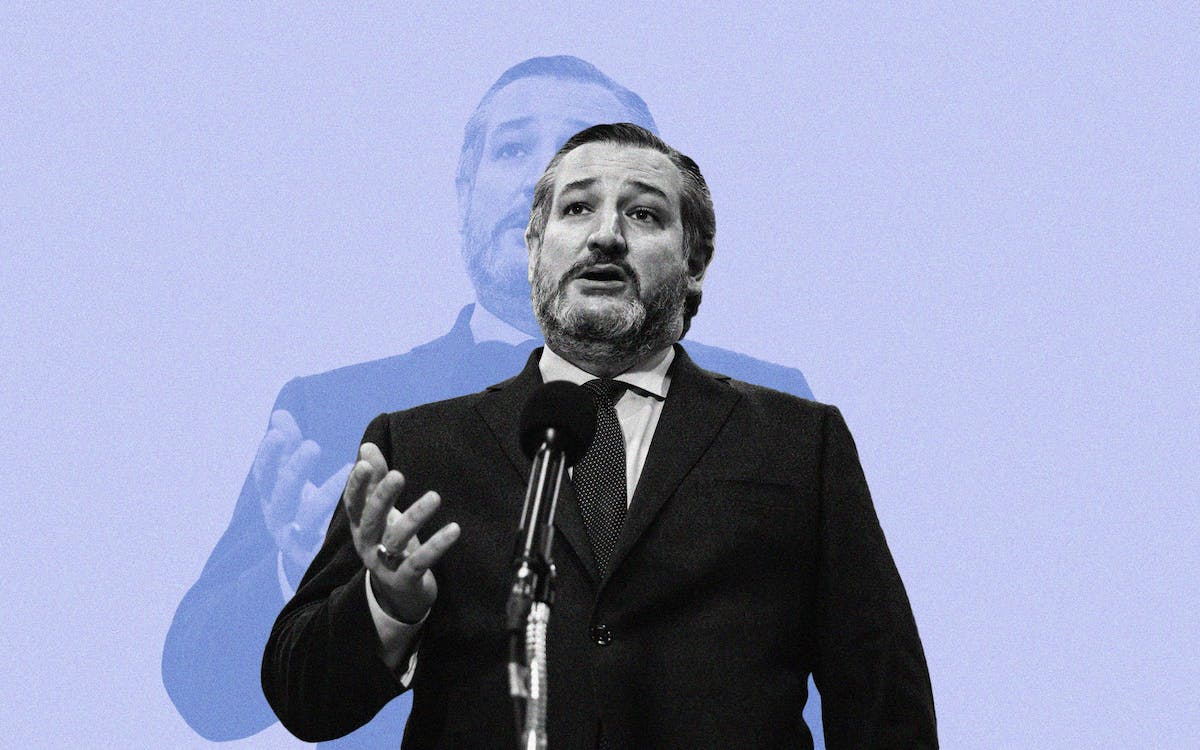 The political history of Texas is one of colorful, headline-grabbing politicians. From Sam Houston to Lyndon Johnson to Ann Richards to Ron Paul, the characters who’ve occupied high office in this state are famous—and infamous—for their big personalities and the often unusual ways they have of saying and doing things. Junior senator Ted Cruz is no exception. Long considered a striver who’d do anything to attain a seat in government, Cruz became nationally renowned for trying to shut down that very government in 2013. The Republican senator reveled in his role as a political heel throughout the Obama era, before enduring a turn as a begrudging yes-man during the Trump presidency. Now that he’s returned to his more natural state during another Democratic administration, we’ve created the Ted Cruz Watch, to help readers track the senator’s latest doings and his whereabouts—be they in D.C., Texas, or, say, Cancun.

Ahead of the NBA season, Cruz, a noted basketball enthusiast, has a handful of new favorite players: Brooklyn Nets point guard Kyrie Irving, Golden State forward Andrew Wiggins, Orlando Magic forward Jonathan Isaac, and Washington Wizards guard Bradley Beal. The makings of a formidable starting five, to be sure, but the Texas senator appreciates them for their work off the court: the group are among a handful of NBA players who have refused to provide the league with confirmation that they’ve received a COVID-19 vaccine. On Tuesday, Cruz tweeted his support for the Unvaxxed All-Stars.

Cruz’s relationship to the vaccine is complicated. He says he’s vaccinated. He added in May that the jab “has given us a lot of freedom.” And Ted Cruz loves freedom! However, he’s simultaneously argued against proposed government vaccine mandates, describing them as “authoritarianism.” Though some local restrictions will prevent unvaccinated players from entering arenas in certain cities, such as the Barclays Center and Madison Square Garden in New York and the Chase Center in San Francisco, the NBA has imposed no such mandate. The league’s rules only indicate that unvaccinated players, who are restricted from certain social activities such as dining with teammates, are likely to have less fun on the road than their vaccinated teammates.

What’s the source, then, of Cruz’s vocal support for players who are refusing a vaccine that no one is mandating they get, that he himself has received, and that he has heralded for bringing Americans more freedom? It’s all about owning the libs. Cruz, a staunch opponent of abortion, ended his tweet with the longtime pro-choice mantra “your body, your choice.” “Standing with” the players who’ve chosen not to get vaccinated—or who won’t confirm they have been—by repurposing a catchphrase used by his political opponents is unlikely to get the NBA to change its relatively light policies around unvaccinated players. But failure to score actual points has never stopped the senator from trying to dunk on his opponents.