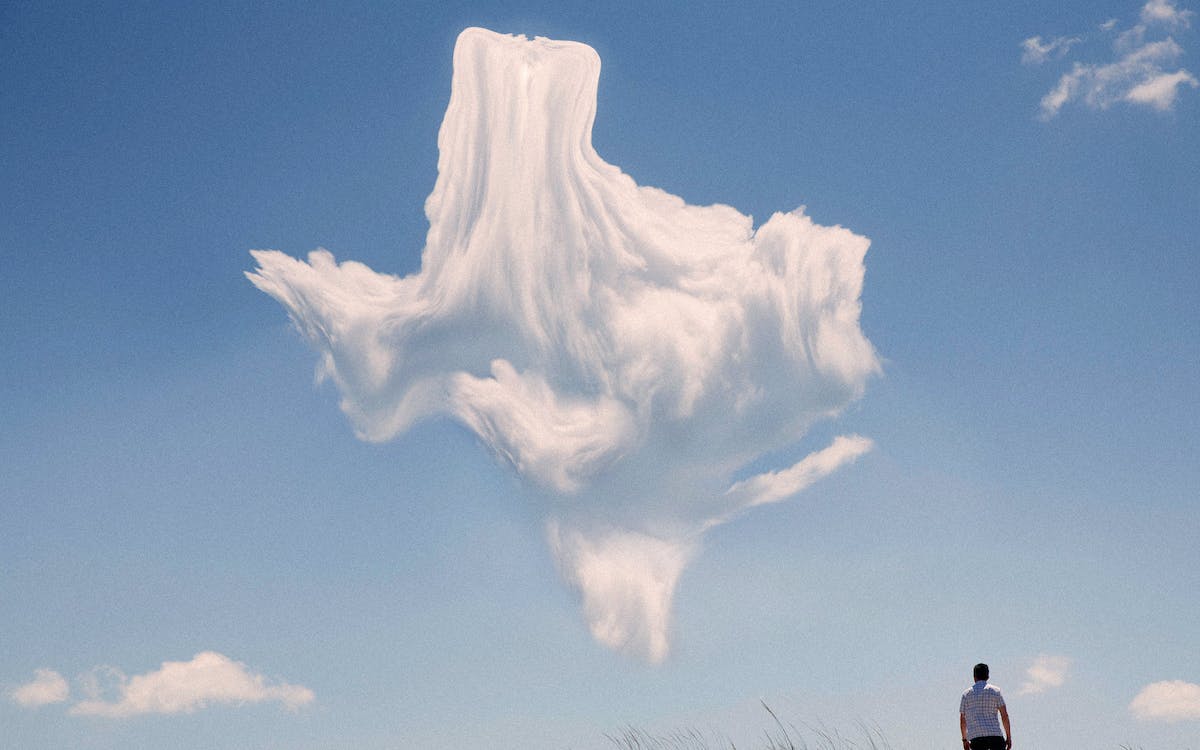 There’s nothing quite like lying on a nice patch of grass, trying to spot shapes in the fluffy cumulus clouds drifting by. Observing Texas’s congressional maps is a similar experience. For decades, the state’s U.S. House districts have been so wildly gerrymandered by the party in power—the GOP for the last generation and Democrats during the previous one—that their shapes can be downright psychedelic. On Monday, the Republican-controlled Texas Legislature unveiled its proposed map for the next decade—and fans of weird district shapes were not disappointed. While previous fan favorites such as Dan Crenshaw’s TX-2—a Mario Bros.–looking elongated pipe of a district—were reconfigured, there are plenty of entertaining newcomers to stare at.

Most of the state’s handful of swing districts got a lot less swingin’. Republicans, reportedly aided by an operative who previously helped craft gerrymanders in Wisconsin, plan to shore up their prospects for holding a handful of seats that the party won narrowly in 2018 and 2020. To do so, they’ve proposed siphoning Democratic voters out of such districts and into two formerly contested seats that Democrats won in both of those years—Colin Allred’s seat north of Dallas and Lizzie Fletcher’s based in Houston. A seat rooted in the Rio Grande Valley, TX-15, currently occupied by Democrat Vicente Gonzalez and never held by a Republican, is the only one proposed under the new map that would have been within a five-point margin had it existed during the 2020 election. It was redrawn to include rural Republican voters farther north, and appears intended to take advantage of the recent shift by Tejano voters toward the GOP.

Across the state, there will be one more majority-Anglo district than under the prior map, and one fewer majority-Hispanic one. The two new seats Texas was awarded for its booming population will be placed in Austin and Houston—and even though non-Anglo newcomers made up 95 percent of the state’s population growth the last decade, both districts will be Anglo-majority.

The map still has to be approved by the Lege—and will almost certainly be challenged in court—but as we prepare for five potential election cycles with our newly enlarged congressional delegation, here’s some quick analysis of the most bizarrely shaped distrcits and how they came to be.

Dan Crenshaw’s district got a glow-up: the new maps drop the portion of the district that snaked out into central Houston—where there was a high-density of Democratic voters—in favor of a big ol’ swatch of Montgomery County, the largest overwhelmingly Trump-voting county in Texas. As a result, Crenshaw’s district, which Trump won by only a single point in 2020, is now proposed to become one that the former president would have claimed by a whopping 23 points. (Crenshaw himself outperformed the former president by 12 points in the election, but the race was still perhaps too close for GOP comfort.)

The proposed district looks a bit like a gulper shark, with two dorsal fins protruding from its back. “Watch out!” the lil’ shark seems to roar, “I’ll take a bite out of anyone who threatens to derail the prospects of a GOP rising star in the event of a future wave election!” And because it’s a shark, it knows a lot about waves.

South Dallas–Fort Worth and East Texas

This district, held by Jake Ellzey—a Republican who won a special election in the summer—has for the past decade been a neat little work of cut-and-paste. Take one more-or-less quadrilateral rural chunk, one reasonably geometric suburban slice, staple ’em together at the corner, and you have a mega-district that gives you something more abstract, contemporary, and collagelike. But the seat went from GOP +19 in 2012 to GOP +9 in congressional voting last year. The redesign makes it safer for Republicans. The district’s rural swath will balloon all the way out to Cherokee County in East Texas, while its suburban portion will be reduced to a tiny stretch that snakes along Interstate 30 out to Irving. Do voters in Palestine and Irving have the same needs or interests, such that it makes sense to put them in the same district? Texas mapmakers don’t particularly care.

Austin and the Brazos Valley

Longtime GOP representative Mike McCaul’s district used to include large chunks of both Austin and Houston—no mean feat given the cities are a two-and-a-half-hour drive from each another. In the proposed map, however, the district no longer includes any part of Houston and keeps a sliver of Austin’s wealthy, Anglo west side, which McCaul calls home. The district now resembles a tropical bird—albeit one that has had its wings clipped. GOP-leaning rural Texans out in Brenham, Huntsville, and the other communities west of Houston that make up the bird’s breast, will be smooshed together with a tiny handful of GOP-leaning suburban Austinites, who comprise the bird’s tail feathers. Birds of a feather, as they say, flock together—and get represented by the same congressman, despite their geographic and economic disparities.

This district has long run from the Rio Grande Valley all the way up to areas east of San Antonio and has been called the “fajita strip” because of its length and narrowness (and also because of the great Tex-Mex food in the district). In the new map, many of the other districts were given a full reimagining of their boundaries—the sort of open, blue-sky ideation where nothing is forbidden (unless the courts, at some point in the future, say it’s a violation of the Voting Rights Act). The new TX-15, by contrast, is the product of a more refined artistic sensibility: it started with the original outline and then was carefully sculpted around the edges. Those with less refined sensibilities might miss flourishes such as the excising of all of Jim Hogg County (Biden +18) and the addition of a chunk of Wilson County (Trump +48), but learning to appreciate such subtleties is critical to developing a true sense of Texas political artistry. Voters in the old district favored Biden by 2 points and Vicente Gonzalez by 3 in 2020; within the district’s proposed new boundaries, voters favored Trump by 3 points instead.

This district, represented by Pete Sessions, had a compact shape for the past decade. Bryan, College Station, and Waco were its anchors, while it grabbed a handful of voters in the Austin suburbs. In the 2021 version of the map, however, TX-17 gets stretched out from thick to thin: where once it looked like a stout lil’ dog, sitting like a good boy as it awaited a treat, it’s now a nattering seahorse of a district. Lufkin makes up the creature’s nose, while its tail continues to curl out all the way to the rapidly changing Austin suburbs. Bryan and College Station—twin cities only four miles apart, whose names are often pronounced together in a single breath—will now have separate representation, with most of College Station being shunted off to TX-10 in favor of Pflugervillians and East Texans all the way out in Nacogdoches. In addition to being a cute little sea beastie, the new district dilutes the political power of suburban voters in a region that just a decade ago was a reliably red part of the state but has trended bluer since.

The most eye-catching of Texas’s new congressional districts is the Thirty-third, which is held by Democrat Marc Veasey. The district has long been majority Black and Latino—what the Voting Rights Act describes as a “minority opportunity district,” meant to ensure that minority voters have representation in Congress. In the past, when it was common for non-Anglo voters to live on one side of segregated cities, putting them together in a single congressional district was easy: you could just draw a circle around that side of town. These days, however, those voters live in diversifying suburbs and make up a much larger percentage of the overall population in the region, so packing them into a single district requires more creativity.

The proposed district, in which 85 percent of voters are non-Anglo, looks like a spooky (but friendly!) ghost. The spirit stretches in narrow, wispy strands from Marine Creek Lake, northwest of Fort Worth, on out to neighborhoods west of Lake Arlington, floating over parts of I-30, until its ethereal form settles down to haunt parts of Grand Prairie and Dallas proper. Its ghostly body throws up its lil’ hands on the district’s northeast side, near the Valley Ranch community in Irving, as if to say, “I dunno, man, you figure out if this is legal!” Many Anglo neighbors of the district’s voters, who live just down the block, might now find themselves in TX-6, TX-12, TX-24, or TX-25, most of which manage to remain majority-Anglo districts despite the changing demographics of the region.

The League of United Latin American Citizens has already made some noise about suing over the proposed TX-33. While it ensures representation for non-Anglo voters, mapmakers seem to be packing as many non-Anglo voters into one district as possible to diminish the reach of their vote, in a manner that some federal courts have found illegal in similar cases. Don’t fall in love with the ghost shape, in other words. It might not last long.