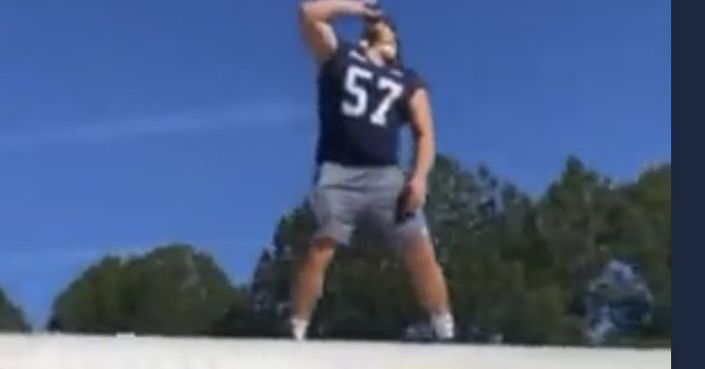 Georgia Southern defensive tackle Gavin Adcock has been suspended by the team indefinitely after he was caught on video surfing on top of the team bus and chugging a beer thrown to him … before the game.

Erk I’m sorry for this foolery, excuse me but what the fuck is this? Who singing the valley song? This man is swag surfing the bus and get a stone cold Steve hammer beer pass and chugged it flawlessly. Before the football game. Wow. pic.twitter.com/yoeBG6oc6X

Adcock, whose team photo looks exactly like someone who would chug a beer on top of a moving bus, was getting ready for a game against Louisiana on Sunday when he thought it would be a good idea to climb on top of a moving bus. Showing peerless judgement, he then caught a beer from a fan, and downed it to cheers from the crowd.

Georgia Southern would go on to lose 28-20, with the team’s head coach fired shortly after.

Chugging a beer in your college jersey is a bold decision. Doing it before the game is a foolish choice. Doing all this on top of a moving bus is mind-boggling. If it wasn’t so reckless and dangerous I might be able to appreciate this, but nah, this is just too dumb.

Adcock took to Twitter to apologize shortly after his suspension was announced.

College is all about learning. Most of the time it’s in the classroom, but sometimes we all need a reminder that drinking on top of a moving bus is a bad idea.