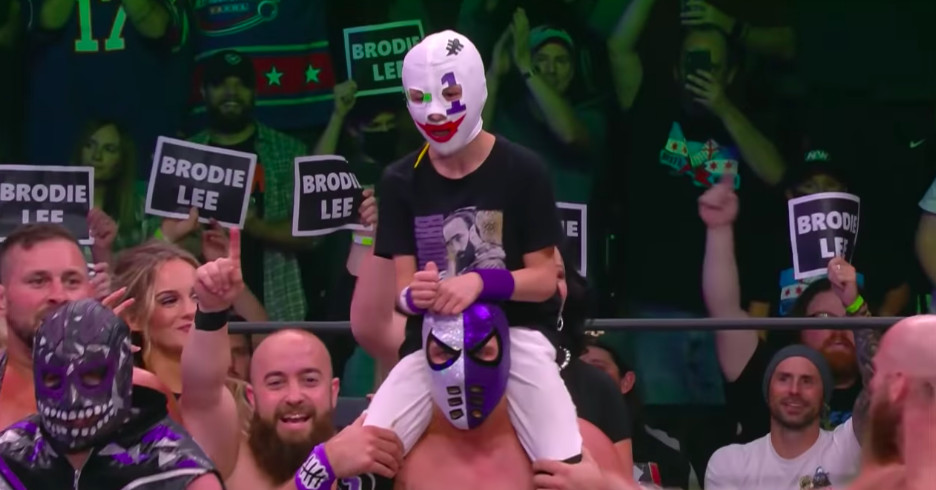 Professional wrestling in 2021 has had some of the most monumental shifts in the history of the business, and as fun as that’s been to watch and experience as a fan, that’s not what will be left with me for years to come. This was also the year where we fully felt the loss of Jon Huber, better known by his in-ring name ‘Brodie Lee,’ a monster of a man, with a heart of gold, who tragically died shortly after Christmas due to a non-Covid lung condition.

The Dec. 30 episode of AEW Dynamite was the most emotional two hours of television I’ve experienced in my life. The friends and family of the late-wrestler put aside planned storylines and written rivalries to pay tribute to a man they loved. Tears flowed openly, fans vacillated between cheering and crying — for one night a business based on so many interconnected elements had only one focus: Honoring Brodie Lee.

Nine months after that show, we experienced it again. On Wednesday night AEW held its first show in Rochester, New York — Lee’s home town, and where he would have made his debut for the company, had Covid not altered travel plans. While the show wasn’t intended to be the same tribute to the wrestler, every segment weaved some element of his wrestling legacy into the production. Whether it was wrestler’s holding up signs, wearing ring attire bearing his name, or his effect permeated the entire night.

It was also a reminder of how beautiful wrestling’s motley fraternity can be. Brodie Lee Jr, known as “-1” in AEW had become a staple of the show over Summer. The eight year old has always wanted to follow in his father’s footsteps into the wrestling business, and that continued as he and his mother, Amanda Huber, became key players in a major plot element.

Brodie Lee led “Dark Order,” a sinister cult of wrestlers who sought to indoctrinate those around them. Following Lee’s death and the emotion shown by those closest to him it became impossible for fans to boo these clear cut bad guys. Suddenly they were cheered, transitioning the group from violent villains, to beloved good guys who took their cues from the eight-year-old Brodie Jr.

In recent months there has been friction. The in-fighting and drama inside Dark Order has been a true tragedy for fans. We all know it’s story, but the loss of Lee punctuated their collapse — so when two of the members were ready to quit on a match Wednesday night, there was only way an intervention could be perfect.

As difficult as the loss of Lee has been to fans of wrestling, the lengths in which AEW has embraced Brodie Jr. and Amanda during this time is the greatest story in wrestling over the last decade. Everyone in that locker room has rallied around the family, all becoming part of the Huber family, and taking it upon themselves to be positive impacts in the eight-year-old’s life.

Tay Conti and Anna Jay are wrestlers who have become big sisters.

Preston Vance, who was Brodie Jr’s favorite wrestler and became close with him even before his father’s death, now raises him on his shoulders and has become an older brother to him.

Even wrestling legend CM Punk, who debuted for AEW only a month ago, but knew Lee from the time they spent in WWE, was reunited backstage with the wrestler’s son and spent some time with the boy.

Tragedy and wrestling are inexorably linked, and so many horrible things happen outside the ropes that all too often fans have become numb to the loss of a star, and move on after a quick memorial segment. This time it’s different. AEW is ensuring that Brodie Lee’s memory isn’t just honored, it’s celebrated and treasured — and most importantly: Remembered.

On Wednesday Amanda Huber announced the formation of the Jon Huber Legacy Foundation, designed to help those wanting to improve their careers, but held back due to real-world circumstances.

The family & friends of Jon Huber announce the creation of the Jon Huber Legacy Foundation. The Foundation will focus on providing support to people in creative fields who have not taken the next step in their career due to family obligations.
Learn more – https://t.co/JyAcSjzMLQ pic.twitter.com/sfwjEAUuWE

It’s a beautiful way to honor a man who saw wrestling not as an athletic competition, or a soap opera, but as art. While his loss will always be felt, having the opportunity to remember him and see his family thriving is the greatest thing in wrestling all year.