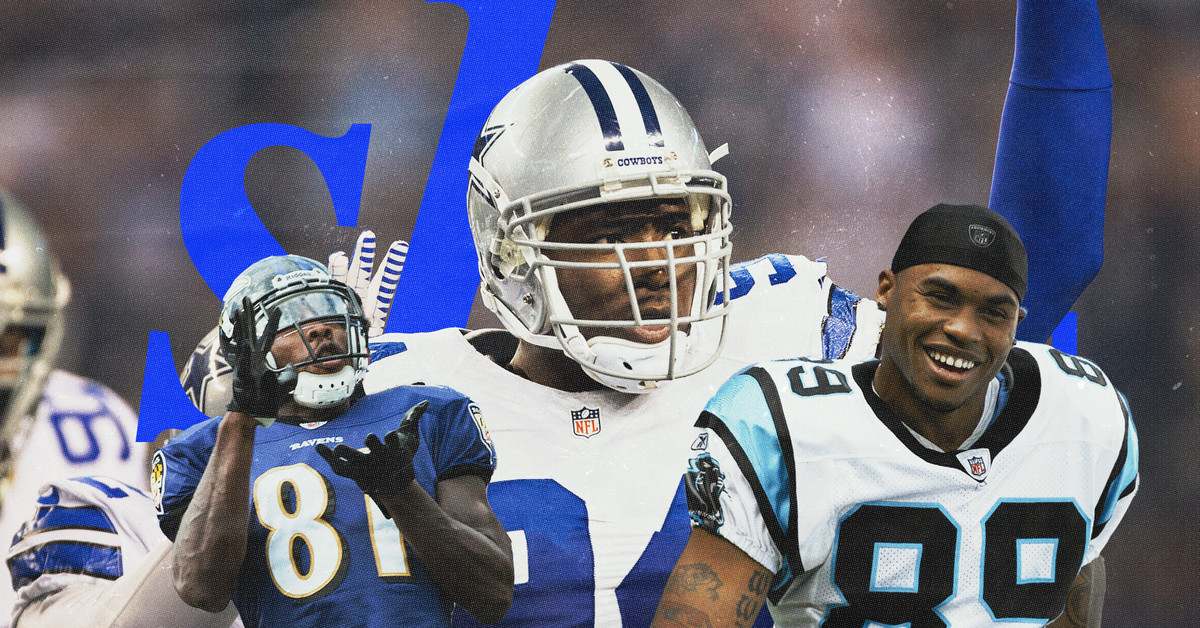 The Pro Football Hall of Fame process is beginning now, with finalists being announced towards the end of the year, and recipients to be told in early February. A total of 122 modern-era players are eligible for the NFL Hall of Fame in 2022. The vast majority have had the opportunity before and not made it into Canton, but this year they’re joined by 10 first-time nominees who have reached their retirement threshold and now have a chance to be voted in.

Unlike the 2021 class, which had absolute locks like Peyton Manning and Charles Woodson, the 2022 first year nominees are a little trickier. So let’s break down who they are, their achievements, and what their odds are of actually making the hall.

Anquan Boldin exploded onto the scene in 2003 when the second round pick out of Florida State obliterated the rookie receiving record with 1,377 yards. This mark stood for 16 years before it was finally bested in 2020 by Justin Jefferson of the Vikings.

Spending half his career in Arizona, Boldin formed one of the most dangerous receiving duos of the early-to-mid 2000s, pairing with Larry Fitzgerald. When they were joined by Kurt Warner in 2005 the trio propelled the Cardinals to the Super Bowl, where it seemed their blistering modern offense would be enough — before eventually losing to the Steelers.

After five 1,000 yard seasons in seven years, Boldin was traded to the Baltimore Ravens. Individual success didn’t come so easily, but personal glory was easy to give up in exchange for a Super Bowl ring, which Boldin won in 2012.

Effective until the end of his career, Boldin never finished a season with fewer than 500 receiving yards. This cemented him among the Top 20 receivers of all time.

The league’s incredible high bar for receivers entering Canton continues, despite Calvin Johnson being enshrined in 2021 with an incomplete resume. There’s little doubt Boldin deserves the call eventually, but the players the likes of Reggie Wayne (who was a finalist in 2021), Andre Johnson, and Steve Smith (who we’ll talk about a little later) all still waiting to get in, it’s difficult to justify Boldin going in before any of them.

Nobody, and I mean nobody, made more of a career out of being a special teams weapon than Devin Hester. He turned the often overlooked third phase of a game, and turned it into an unparalleled weapon. The raw touchdowns doesn’t always do Hester’s impact on the game justice.

For his eight years in Chicago, where he did the most work of his career, Hester averaged 25.3 yards per kick return and 12.3 yards per punt. That might not seem like a lot at first glance, but it means he was always netting positive yards on teams where defense ruled the day. This also doesn’t include numerous times opposing kickers and punters would sacrifice huge chunks of yards either kicking away from Hester, or punting out of bounds simply to avoid the threat of a huge return.

Enshrining Hester in Canton would have to be an example of the NFL showing creativity, and that’s just not going to happen. The idea of Hester being entered as a wide receiver with 3,300 career receiving yards is just too unlikely. Make no mistake: Hester’s impact on football warrants it, but it’ll be several more years before we see this become a reality.

The second first round pick in Texans history, Andre Johnson was pegged to be the No. 1 receiver who would pair with quarterback David Carr to launch Houston into early success. While that dream never materialized with their passer, the Texans ended up with one of the greatest receivers of all-time in Johnson, who rode the wave of tumult on the Texans and found a way to make a huge impact.

Johnson’s 6’3 height, paired with a 229-pound frame and incredible speed made him a nightmare matchup for opposing defensive backs at a time where the league’s focus began to shift more towards passing. Round this all out with spectacular route running and he was truly a rare receiver able to make mediocre quarterbacks look better simply by being on the field.

I’m putting Johnson’s odds on equal footing with Anquan Boldin. There is plenty of back-and-forth argument who is better overall, but in the end it’s just hard to envision either of these guys being first ballot Hall of Fame players until Reggie Wayne gets enshrined … along with someone we’re about to talk about.

Rounding out the trio of first year receivers who could make Canton in 2022 is Carolina Panthers great Steve Smith, and he has a very, very compelling resume. Smith’s all-time receiving yards are sandwiched between Tim Brown and Marvin Harrison, both of whom are already in the Hall of Fame. Few would argue against him being one of the best receivers of all-time, and now he’s transitioning to broadcasting people are remembering the wit and bite that made him one of the league’s most colorful characters during his career.

At a position dominated by towering athletes, the 5’9 Smith was an iconoclast. Playing at a time where smaller, shiftier receivers were relegated to the return game, or playing in the slot — Smith made a football legacy out of playing bigger than his height would lead you believe.

Cornerbacks who played against Smith have routinely said he was one of the toughest to ever play against. He fought for every ball like his life depended on it, and that was assuming the catch was contested in the first place — and he hadn’t just blown past you with his unreal acceleration and knack for route running.

Many of the players at the top of the league’s receiving records benefitted from some of the NFL’s greatest passers: Joe Montana, Tom Brady, Kurt Warner, Peyton Manning — for the majority of Smith’s career he caught balls from … Jake Delhomme. Still, he turned in season after season of phenomenal results, finishing with over 1,000 yards in eight of his 13 years in the NFL.

I’m bullish on Smith becoming a first ballot entry. While he’ll be stacked against Boldin, Wayne and Johnson in the eyes of voters, when the dust settles it’s clear to see he belongs. It wasn’t long ago that the barrier to entry for receivers was impossibly high, but with both Cris Carter and Terrell Owens getting their nods in recent years, it finally opened the door for guys like Smith.

It’s always tricky to evaluate offensive tackles, and to be fair Jake Long was really good when he first entered the league — but justifying him for the Hall of Fame is rough. For a while it appeared he’d be the kind of generational anchor lineman to make the hall, but the back-end of his career was particularly unkind, marred with injuries and slipping performance.

We’re left with a remarkable short run, and little more.

Long played nine years, and was incredible for four of them. The other five were largely forgettable. It’s not happening in year one, or maybe ever.

For years Mangold was the only bright spot on otherwise disastrous Jets teams. Playing the role of good soldier certainly earns Mangold props, but that doesn’t mean he’ll make it to Canton for it.

Mangold is the epitome of an excellent player who doesn’t make the cut.

It’s remarkably difficult to get notice at the center position, even if you’re one of the best during your era. Until players like Jeff Saturday and Olin Kreutz get noticed, someone like Mangold isn’t.

One of the best pass rushing linebackers of all-time, Ware rose to prominence in Dallas before moving to Denver and closing out his career in style, winning the Super Bowl in 2015.

There are so many incredible moments from Ware’s career, but his 2008 season with the Cowboys was the stuff of legends. 84 total tackles, 20 sacks, and six force fumbles — just to cap it all off. Ware was an absolute monster on the field whose combination of speed and power was impossible for most offensive lines to manage.

For my money, Ware has the best chance to be a first ballot Hall of Famer on this list. His career numbers compare favorably to Derrick Brooks, who has already been enshrined — and he’s without a doubt the best outside linebacker who hasn’t entered Canton yet. This is a no-brainer, as far as I’m concerned.

Mathis’ spectacular career in Indianapolis always felt like it came at a cost. In fact, the entire Colts defense was often unfairly ignored, with the team widely characterized as an offensive team, with no defensive bite.

While it’s fair to critique the team’s linebackers and secondary, there is no doubt that for almost a decade the pairing of Dwight Freeney and Robert Mathis was one of the most fearsome pass rushing duo in the NFL.

Of the pair it was Mathis who was often seen as the “other guy” in the shadow of Freeney’s utter brilliance. In reality it’s impossible to imagine either flourishing without the other. An absolutely brilliant player who deserves to be remembered.

I absolutely think Mathis was overlooked during his career, but it’s still a huge jump to go from that to “put him in Canton.” This will not be a year one induction, and there are several other high profile ends who deserve to get into the Hall of Fame before Mathis, like Jared Allen and John Abraham. It’s just a brutal position to reach the threshold for, and as it stands I think he falls short.

One of the most delightfully wonderful players of the modern era, there is nobody quite like Vince Wilfork. Best remembered for his time on the Patriots as a space-eating two-time Super Bowl Champion, Wilfork would go on finish his career in Houston.

Wilfork was the glue that made everyone around him better. Not only was he one of the best nose tackles to play the game during his time in the league, but an astonishing locker room leader who commanded respect.

I would love to have confidence in Wilfork entering the Hall of Fame, but quite honestly, he just doesn’t have the complete resume. Furthermore, the sheer amount of defensive tackle talent waiting for this bust to be minted is beyond compare. Kevin Williams, Haloti Ngata, La’Roi Glover and Ernie Ladd — all still remain without a Hall of Fame berth. Until some of those mistakes are rectified it’s tough seeing Wilfork getting in.

A big-bodied, athletic defensive back, Cromartie was an absolute wall. When he entered the league the idea of a cornerback over 6’0 was rare, and he used every bit of his 6’2 frame to make life difficult.

A strong start to his career in San Diego was eventually eclipsed when he joined the New York Jets and started across from Darrelle Revis. Here the duo formed a tandem that was near impossible to beat, and while (like Robert Mathis) Cromartie was often overlooked considering the man across from him, he was still great in his own right.

It’s not going to happen. Cromartie was a great player for his time, but we have some absolute monsters at DB who are yet to be enshrined. Ronde Barber, Darren Sharper, LeRoy Butler and Darren Woodson — all have more compelling resumes and a body of work that demands recognition ahead of Cromartie. It’s doesn’t mean he’s a bad player, he’s just not a Hall of Fame player.