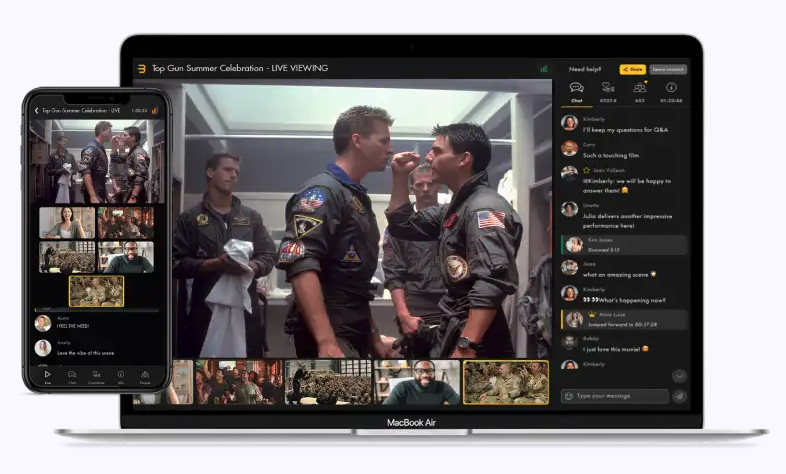 A startup with a strong Seattle presence is serving as actor Val Kilmer’s wingman for an interactive, streaming celebration of the hit movie “Top Gun” on Saturday.

SparkRise, the startup that acquired and merged with Seattle-based Flaggpole, Inc. in 2020, is a tech company that creates campaigns for social good by bringing together causes, celebrities and brands for a mix of influencer and cause marketing plus advertising. Ryan Myers is the CEO of SparkRise, which has developer, legal and marketing teams in Seattle and talent, PR and production teams in Los Angeles. He previously led Flaggpole for nine years.

Kilmer starred as Iceman alongside Tom Cruise’s Maverick in the 1986 film about Navy fighter pilots. The longtime actor, who also starred in such films as “The Doors,” “Tombstone” and “Heat,” is a SparkRise board member and investor. And he’s the subject of a new documentary called “Val” which is streaming on Amazon Prime.

Saturday’s event starts at 5 p.m. PT and is billed as a potluck movie night and celebration of “Top Gun.” SparkRise is teaming with Beem, a virtual event hosting platform, to stream a party and interactive screening of the movie from Kilmer’s HelMel Studio in Los Angeles. The night will feature notable celebrities, live music, military guests, and more. Kilmer, who is a throat cancer survivor, will participate in a virtual chat with other panelists.

The potluck event is free and the cost to attend the watch party is $8.95. Donations during the event will benefit the USO and Kilmer’s TwainMania Foundation.

SparkRise works by leveraging its relationships with celebrities and non-profits. Brands that sponsor events on a cost-per-click basis might rely on call-to-action methods for participants such as downloading a coupon or watching a 15-second promo video.

“We wanted to dramatically reshape the landscape of advertising,” Myers said, adding that the event is a “massive test” of its technology.

According to SparkRise, 13 military bases and USO centers will be live streaming the event as well as several restaurants and schools. Some pre-recorded content will be streamed, including a fighter pilot “dogfight.” Exclusive non-fungible tokens (NFTs) are also being created.