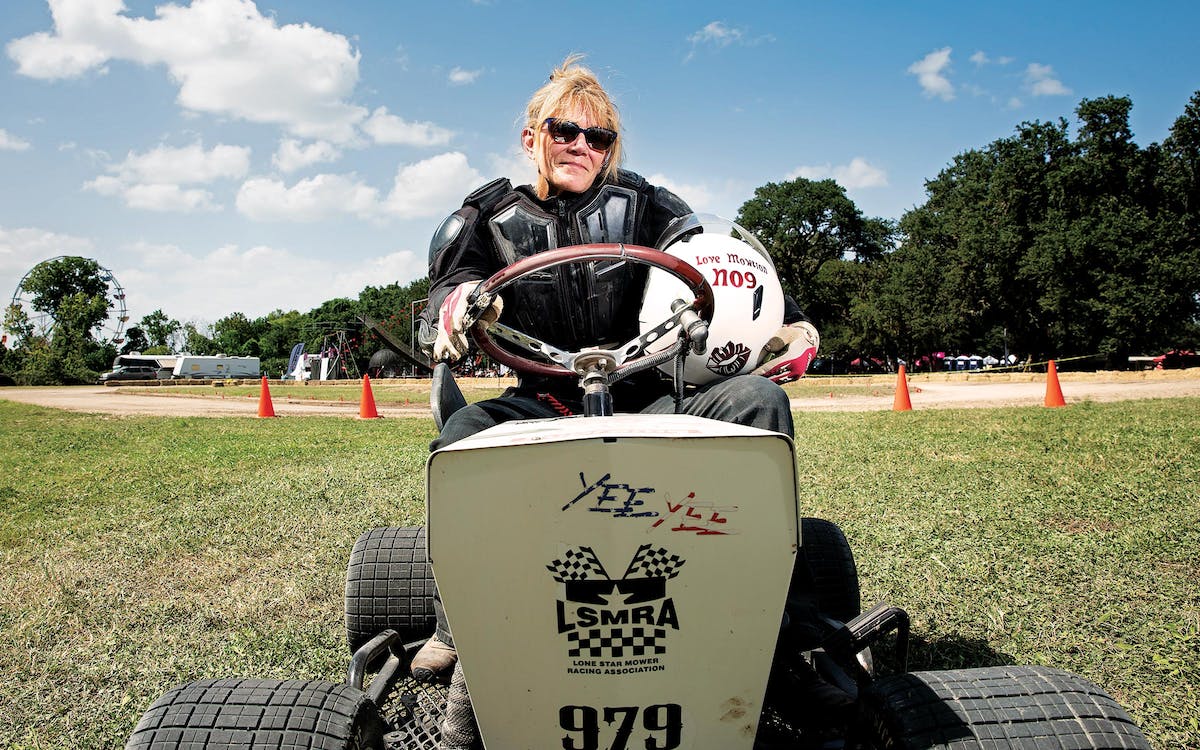 The early September heat creeps toward triple digits at the Kendall County Fairgrounds in Boerne, but that doesn’t stop Julie Tynmann from pulling on heavy, fire-resistant gloves and racing boots, a black neck brace, and a regulation long-sleeved shirt over her lucky purple racing shirt. She takes a swig of Red Bull before putting on the most important piece of gear, her “big old helmet.” State champions like Tynmann don’t let the sweat and the dust discourage them from suiting up and hitting the track. Getting dirty is the least of her worries.

“I’m trying to get mad,” Tynmann tells me when I ask how she prepares to race. “Like, ‘Get out the way, here I come.’ But I’m not trying to get so mad that I kill myself.”

It might sound like she’s psyching herself up to slide behind the wheel of an Indy 500 race car and punch it to 220 miles an hour, but Tynmann, 45, is one of a handful of women who full-throttle it to 35 or 40 miles per hour around dirt tracks across the state as part of the Lone Star Mower Racing Association (LSMRA). If that doesn’t sound fast, ask drivers who’ve crashed, endured nasty bruises, or even suffered broken ribs when their souped-up lawn mower with a Predator engine flips over a hay-bale barricade.

Sammie Neel, 62, has seen plenty of crashes, bruises, and burns in her twelve years of racing. She once raced around a track at a monster truck show in the tiny town of Leona, where she flipped and wound up pinned beneath her mower, which she nicknamed “Love Mowtion No 9.” She had stickers with the words “Pucker Up – Here I Come” on the front of her mower and “Kiss This” on the back.

“I was like, ‘Is anybody gonna get this mower off of me?’” she says of her monster rally flip. “Then I thought, ‘Heck, it’s not that heavy,’ so I pushed it off myself.”

Neel didn’t set out to be a lawn mower racer. She just wanted to take some photos of her husband, Marion Neel (a.k.a. Capt’n Khaos) at his first race in Bryan, in 2008. When she saw the sparkle in his eyes as the engines revved, she thought, “Oh, crud. I just lost my husband to lawn mower racing.” At one race in 2009, her husband challenged her to put down the camera and give it a whirl on the track. Sammie reluctantly accepted the challenge, but she was mortified when her mower sputtered and stalled—not the first impression she’d been aiming for. There was a racer nicknamed Poor John because he always lost, and Neel came in behind him. When she got off, she told Marion to never let Poor John beat her again, and to get her something that would run.

“Once you get a taste of that competition, it’s game on,” Neel says. The next month, she purchased her first mower, which had a chicken painted on it (“the guy I bought it from was sponsored by Tyson”).

The LSMRA started in 1998, but the sport goes back to at least 1968, when a British cricket club held a charity event called the Lawn Mower Grand Prix. In 1973, an Irishman named Jim Gavin, who was fed up with the hefty price tag that came with most motor sports, had a few pints at a pub and decided to form the British Lawn Mower Racing Association. Gavin’s dream is alive and well on dirt tracks from Boerne to Gun Barrel City and beyond, and instead of millions of dollars, Neel says you can get into mower racing for about $1,500 to $2,500. During its past season, the Texas club had 72 paid members, with 46 active racers ranging in age from 6 to 72. Neel estimates that only 6 or so of the 46 racers are women, but she says the number of female racers is growing each year.

“This is a sport for everybody,” says cattle rancher and racer Kevin Counsil of Madisonville. Participants come from all walks of life. “It’s a cornucopia of what people do for a living. We don’t have any preachers, though, probably because there’s too much swearing.”

Left: Crystal Gill, 39, has been racing for six years.

Top: Racers often personalize their mowers with stickers or paintings, such as this patriotic bald eagle design.

“We go from mild to wild,” Sammie Neel says of the competitors’ transitions from dozer operator or cabinet maker or mom to lawn mower speedsters when the green racing flag goes up.

Not every racer gives her mower names like Mowcrastinator, Lawnatic, or Black Widow. Crystal Gill, 39, a homemaker from Bryan, wrangles her young son as she tells me about her small but mighty yellow mower with its eight-horsepower engine. It doesn’t have a name, “but it’s so cute and small, it looks like Tweety Bird,” she says.

Unlike Neel and Tynmann, Gill grew up around dirt track racing. It’s in her blood, she says. At the Labor Day races in Boerne, the final event of the season—a new season starts in October—Gill is with her dad, brother, boyfriend, and son, who are serving as her pit crew and emotional support. She’s racing even though she’s just recovering from a cracked kneecap.

“I used to do demo derbies,” Gill says. “I would be the only female in there and people would come after me to try and get me out. I’d get hit so hard I’d almost flip.”

Like everyone else I spoke with, Gill loves lawn mower racing not just for the thrill, but for the people she’s met along the way. She’s been racing for six years, with no plans to stop, even though she’s been thrown off a mower “like a bucking bull.” She says the adrenaline keeps her coming back, but so does the fun of hanging out with Neel and Tynmann and the rest of the crew. Between races, they sit under shady tents, talk about their families, eat brisket sandwiches, and hydrate before they hit the track again. At the end of the day, they usually head out to get dinner and margaritas together.

“It’s anything and everything all at once,” Gill says of the culture. “It’s family. You have your blood family, and you have your racing family.”

That rang true when track steward Eddy Akin brought out his bullhorn and called everyone together for a drivers’ meeting before the hot laps started. Hot laps give the drivers a feel for the track and are followed by heat races, ten-lap races that determine where each driver starts in the final, twenty-lap feature races.

Neel, who is treasurer and secretary of the LSMRA, wrote the lineup on a board and everyone gathered around, teasing one another and good-naturedly calling some newbies rookie. Akin told them he wanted to wait to start the race until the fair’s nearby motorcycle trapeze stunt was over. “We wouldn’t want to dust them out,” Akin said. “It wouldn’t be right.”

He reminded the drivers that they’re not there to cause trouble, as can be the case at the demo derbies Gill talked about. They’re just there “for bragging rights and a trophy.” And, of course, to have some fun.

Left: Crowds braved the heat to watch the races from the stands.

A twelve-year-old racer named Anna Rust stood by with her parents and brother as she listened to Akin and Neel run through some sponsorship updates and raffle details. Rust, her brown hair in two French braids, loves go-karts and four-wheelers, so speeding around in a lawn mower doesn’t scare her. I ask her what her friends in seventh grade think of her racing.

After the drivers’ meeting, the races kicked off and dust plumed up and around the crowd of spectators. Drivers race in different classes, mainly based on engine size, and at the Labor Day races in Boerne, Gill’s mower stalled out as she raced against Neel, knocking her out for the day. After losing to her brother Rayden the first time around, Anna came back strong to beat him and win her feature race. Tynmann won both of her feature races.

“That has always been my mission—not to be last,” Tynmann said after completing her victory lap, holding the black-and-white checkered flag. Neel didn’t get the checkered flag this time, but she has beaten her share of men and women since she started racing. When I ask her if the guys get angry, she doesn’t hesitate with an answer. “Oh, heck yeah. They pretend not to show it, but they can’t stand it if they’re beaten by a woman,” she says.

Richard Lively, the group’s president, has raced against Neel for years. Like so many of the racers, he switched to mowers because, unlike in other motor sports, no one picks fights at lawn mower events. I ask him what he thinks about Neel, and her penchant for winning—even against him.

“Don’t underestimate that girl,” Lively says. “She can drive.”

Later on, Rust, Tynmann, Gill, and Neel all attempt to cool down, dust off, and let the adrenaline simmer down. Their helmets sit on their mowers, caked in dirt. They relax, they socialize, and they gear up to do it all again. I see Tynmann talking to Anna, so I walk over and ask what kind of advice she just gave to the next generation of female racers.

Tynmann looks at me with a conspiratorial smile. “I told her, don’t look back.”