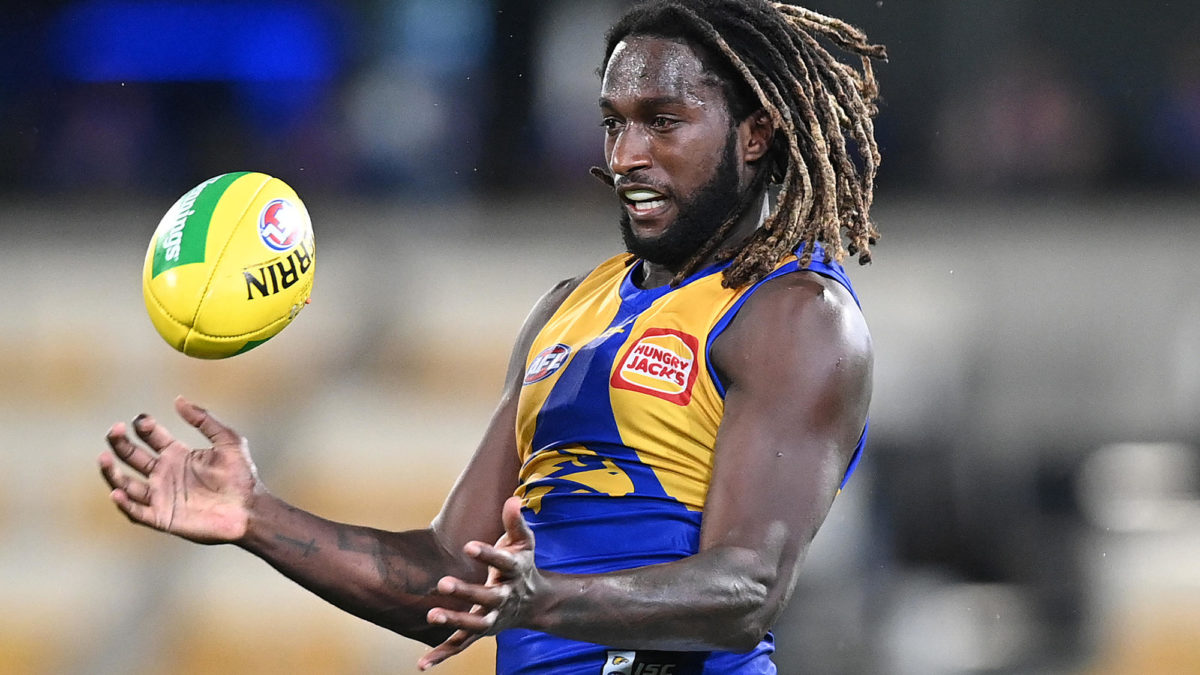 Welcome to the halfway point of my season reviews. Today’s subject is the West Coast Eagles.

I will try not to be too excoriating of the Eagles even though they missed the finals for only the second time in Adam Simpson’s tenure as head coach at West Coast. What was more apparent than ever were the flaws in West Coast’s game plan and their inability to win away from home.

We will review what has worked for the Eagles this year (limited as they may be), what increasingly hasn’t worked, the remaining questions and finishing off with my solutions to the quandaries that are afflicting the Eagles now. Now, let us begin on the positives for the Eagles and focus on what worked.

Nic Naitanui
Naitanui became the fourth player to earn back-to-back John Worsfold Medals, joining Ben Cousins, Glenn Jakovich, and Elliot Yeo. On the one hand, Naitanui put together a very good season where he led the AFL in hit outs to advantage as well as being No.3 in total hit outs.

However, it is perhaps emblematic of a West Coast side that is bereft of young talent coming through that the best and fairest was taken out by a 31-year-old ruck.

Naitanui is fast cementing his name as one of the best rucks ever to play the game alongside Dean Cox, Max Gawn, and Paul Salmon. It is particularly his tap work in the centre and his follow-up work on the ground that defines his game as he can use his raw athleticism to smash players who are unfortunate enough to be standing in front of him.

It is good to see because he is a breath of fresh air at the ruck position, particularly since multiple seasons in 2017 and 2018 were completely derailed by injury to his ACL.

Their key forwards
It feels like I am mentioning the key forwards a lot in these reviews, but only because they are working quite well. The combination of the stand rule and protected zones has decongested the field very well, allowing for more exciting play down the corridor of the ground. I just hope that the AFL keep the current system in place to enable sides to get comfortable with the system and allow master coaches to come to the fore.

However, focusing on the Eagles, the top three goal kickers were Jack Darling, Josh Kennedy, and Oscar Allen with 42, 41 and 28 goals, respectively. With Liam Ryan at their feet and Jack Petruccelle finally coming good, the Eagles could develop an extremely potent forward line that can stretch and out manoeuvre any defence.

When you consider that Willie Rioli is also due to come back in after two seasons out of the game due to his ASADA suspension, things begin looking up for the Eagles. However, I can’t help but wonder if the two years off have negatively affected the mercurial talents of Rioli as well as the fact that those two years have been collectively some of the most traumatic for society.

The mercurial ball use of Rioli at his high half forward position will enable better ball use going into the forward line, and when combined with the exemplary spacing and leading patterns of the key forwards it becomes clear that they will be challenging the eight again next year.

Now, this is a much larger category for the Eagles. They had far less go right for them this season than you’d expect for a side that wants to be challenging now. Here we will go through precisely what didn’t work for the Eagles and why that may result in a prolonged period down to the bottom of the ladder.

Playing away from home
The Eagles will hope to never have to play at Kardinia Park for another 20 years after two successive beltings to Geelong and the homesick Swans, respectively. It was emblematic of a disparity between the Eagles’ form at home compared with their form away from home.

Yes, they beat Carlton at the SCG but Carlton had an even worse year than West Coast. Across the course of this season the Eagles lost seven games away from home, and the sides they did beat away from home were mostly bottom four.

Much of the punditocracy has said they believe that West Coast can make another charge up the ladder but they are running out of time. If they would like to be a premiership threat they need to reduce the gap between their best form at home and their form away from home.

Flawed game style
West Coast play an anachronistic game style that relies upon their efficiency going inside the forward 50 as well as a kick-mark style that deprives the opposition of possession. However, when they attempted to play this style against good sides that knew how to shut down the options they had going forward, they were smashed. You can see it in the fact that their average losing margin was nearly six goals across the span of the season.

Their kick-mark style was still there but gone was the forward momentum, as well as the ability to flick the switch and move the ball at pace into their forward 50. It is clear that the Eagles outfit are all a year older and it may be too much for them to handle as they need to spend a prolonged period down the bottom of the ladder in order to challenge for another premiership.

What’s going on with their development?
The last two first round picks that the Eagles have taken to the draft are looking to be removed from their list. Now one of those selections was Daniel Vernables who was forced into retirement as a result of the problems he’s been having with concussion.

However, Jarrod Brander, the Eagles first round draft pick in 2017, has been told that he will not be offered a contract for next season. Brander has been perennially played out of position in an attempt to develop him as a swing man, however, there are reports that he is dissatisfied with this, and may very well force his way out of the side to a side that plays him in the correct position.

Do they regret the Tim Kelly trade?
Tim Kelly is a great player – of that there is little doubt. He was a master stroke of drafting and development from the Geelong football club but given his own family environment and having a child on the spectrum, he felt he needed to go back to Perth to get his family support network around him.

The reason I question whether they regret the trade is they could have just as easily forced Kelly to the pre-season draft and given the very real motivation behind him requesting a trade back to Perth. I think they could havegotKelly easily far more cheaply than the king’s ransom they ended up paying, but retrospect is 20/20.

It’s a good draft for Western Australia this year
The Eagles should seek to exploit the glut of talent that West Australia has produced this season for the draft. There are very few ways they can mess this up. If they can get another first round selection that would be ideal so they can take multiple players.

I believe they should look for Matthew Johnson, who is a big-bodied midfielder who can kick goals along with Jacob Van Roynen who should still be available at the Eagles second selection who can play at both ends of the ground.

The only issue I have with this is the draft is more than likely compromised due to yet another season derailed by COVID, and it may be something of a false dawn for West Australian talent given their colts leagues and second-tier competitions were able to remain functional for the bulk of the year.

Trade out some of their senior talent
I’m not saying cut as deeply as North Melbourne did, but the Eagles have a glut of talent who are able to play for at least another four years. I am of course referring to players like Jeremy McGovern and Jack Darling who have prohibitively large contracts but still could get some good draft picks or make a late play for some West Australian talent that has gone back east.

Of course, if they want to challenge for one more year then they will hold onto their players and maybe even make a play for some homesick talent like Aaron Naughton and Tim English at the Western Bulldogs.

Best and fairest: Nic Naitanui
I have already sung Nic Naitanui’s praises for winning a second successive John Worsfold Medal. I believe that it is at least in part because of the large sections of the season that mainstays like Andrew Gaff and Elliot Yeo did end up missing. However, Naitanui is a deserved winner of another best and fairest and he may be hoping to cap off his career with an unlikely premiership medallion.

Best win: Round 13 vs Richmond, 85-81
Now, I do have an anti-Richmond bias, but this was a great win from the Eagles. They romped home down by four goals in the fourth in a pattern of the Tigers losing games badly in the fourth and relied upon the clutch abilities of Josh Kennedy to absolutely nail his set shot from a tight angle.

This win in a season bereft of highlights is the Eagles best win.

Letter grade: F
It feels like I have given this grade out a lot this season, however, I do not believe the Eagles played well this year. Their flaws are more apparent than ever and given their trade environment I believe they may end up spending multiple years in the wilderness. That, and the rigid adherence to an out-dated and inflexible game style, see me give the West Coast Eagles a failing grade.

Way-too-early prediction: 12th-18th
Sorry, West Coast fans, I am predicting a prolonged period in the wilderness for the Eagles at least for the next two seasons. I believe that their ageing players are only going to get older, and their youth isn’t there to take the next step with them. So, the Eagles will be a bottom six side next year.

Well, there you have it, folks. I know I can be a little provocative in my perceptions of different sides, but what do you think? Leave your thoughts in the comments below and I will do my best to respond.

Tune in tomorrow for my review of the Essendon Bombers, who were the surprise packets of the year.