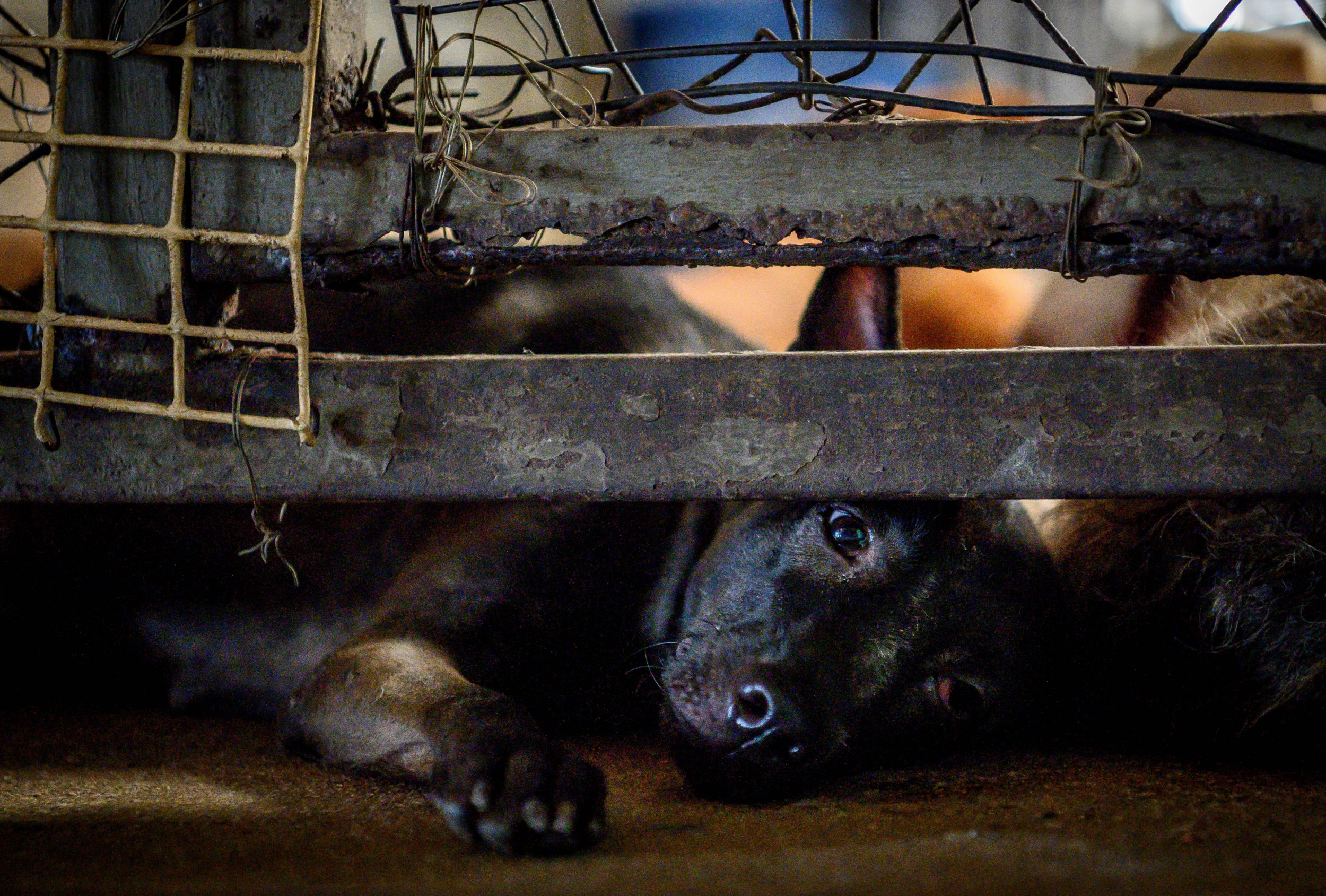 A staff member of the Kentucky Humane Society found a taped cardboard box with “FOUND HELP ME” written on it on September 17. When the staff member opened it, he found an emaciated dog. Now, the puppy, which the shelter has named “Liam” is fighting for his life.

“The young dog’s inflamed skin was raw and swollen from infection, he was missing almost all of his fur, and he was bloody from the sores that covered his thin body,” read a Facebook post published to the Kentucky Human Society’s Facebook page. “He was so weak from demodectic mange and malnutrition that he could not even stand on his own.”

According to VCA, an animal hospital organization with locations throughout the United States and Canada, demodectic mange is caused by a parasitic mite that lives in a dog’s hair follicles. It is the most common form of mange in dogs.

Although the Kentucky Humane Society wrote demodectic mange typically isn’t life-threatening, the puppy’s immune system was in poor shape because he was “suffering for so long from skin infections and malnutrition.”

The puppy, which the shelter estimates to be between 6 to 8 months old, wasn’t expected to make it through the weekend after he was found on Friday. He weighed 15 pounds and the shelter wrote that he has his adult teeth.

“His growth may have been stunted from lack of nutrition,” the post read.

Staff at the shelter checked security footage and saw a man leaving the area where Liam was found just after midnight on Friday morning.

A follow-up post published on the Kentucky Humane Society’s Facebook page on Tuesday announced that Liam took a turn for the worse.

“This morning he tested positive for parvovirus,” the post read. “Our team rushed him to a veterinary hospital, where he is receiving round-the-clock emergency care in their quarantine ward.”

VCA noted that parvovirus comes from the feces of infected dogs. Susceptible dogs can become infected by ingesting the virus, which is carried to the intestine.

“Due to its environmental stability, the virus is easily transmitted via the hair or feet of infected dogs, or on shoes, clothes and other objects contaminated by infected feces,” the article from VCA read.

It can take six to 10 days for dogs to show clinical signs of the virus. According to the Kentucky Humane Society’s Facebook post, symptoms can include vomiting and diarrhea. Dogs can also become severely dehydrated and have an imbalance in their electrolytes.

PR and Marketing Director for the Kentucky Humane Society Andrea Blair told Newsweek that getting pets vaccinated can help prevent the virus. Although veterinarians will use medications and intravenous fluids for the puppy, Liam’s body will have to do most of the work to fight the virus until he recovers.

Blair said the circumstances for the puppy’s condition are unclear, and he was not microchipped or neutered.

“We don’t know if it was an owner who couldn’t afford care, but it was clear he was medically neglected for a very long time and never received vaccines,” she said.

Blair told Newsweek that shelters across the country frequently help animals that are left behind. She said they may be tied to a fence or in a container, but it is an occurrence many shelters are familiar with.

“At least they brought him to our facility so he has a fighting chance,” Blair said.

The Kentucky Humane Society previously saved the life of Ethan, a dog left in the shelter’s parking lot. Weighing in at 38 pounds, staff members at the shelter gradually nursed Ethan back to health, and he has since been adopted.

At press time, Liam continues to fight the virus but does not have an appetite.

“His condition is considered very critical at this time and we do not know if he will survive, but we will not give up on him and are doing everything we can to help him get through this,” the update provided on Facebook read.