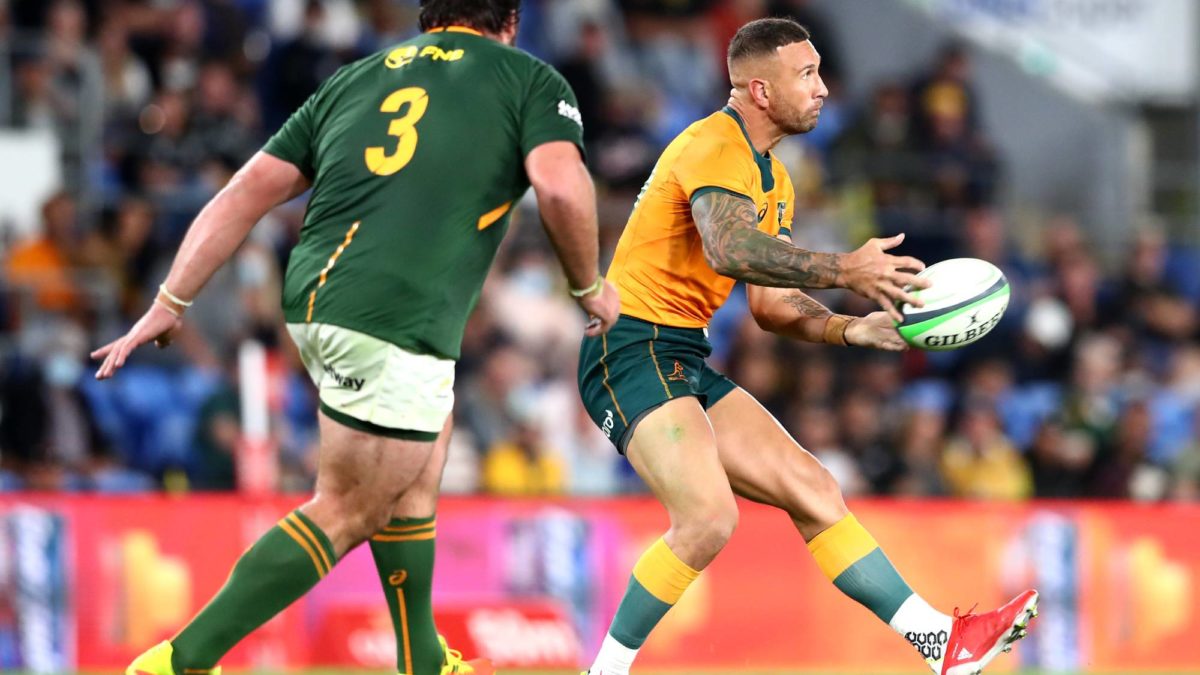 Quade Cooper’s remarkable match-winning comeback to international rugby was lauded in the media of Australia’s Rugby Championship rivals, but questions were raised over the world champion Springboks’ failure to close out Sunday’s game.

Cooper’s nerveless, 45-metre penalty kick after full time gave the Wallabies a two point win in his first Test since 2017.

There had been plenty of speculation about how he would perform when coach Dave Rennie made the hail Mary call to bring him back in place of Noah Lolesio in the Wallaby no.10 jersey.

One of those who predicted Cooper would find it tough to step up after a season in Japan followed by a four-month break was New Zealand Herald columnist Phil Gifford, who was in an apologetic mood in a story posted on Monday.

“Having savaged the selection of Quade Cooper in print and on air, it only seems fair to say I was completely wrong, and that he was the player of the game in Australia’s remarkable win over South Africa,” Gifford wrote in a column item headlined: “Next, he’ll bring peace to the Middle East?”

“His goal kicking was extraordinary, nerveless and accurate. In general play he was error-free, and his front-on defence, which in the past has been a pretty obvious Achilles heel, was never put under pressure as the young Wallaby forwards refused to cower in the face of the biggest, meanest-looking mob of bullies in world rugby, the Springbok pack.

“The masterstroke was that Cooper had by his side, in midfield partner Samu Kerevi, a flinty 108kg rock who offered the sort of muscular, fearless, physical presence that Little John did for Robin Hood.

“Coach Dave Rennie had worked out that a 33-year-old Cooper running at behemoths like Duane Vermeulen was a foolish option. So, short of being his conjoined twin, Kerevi couldn’t have stuck closer than he did to Cooper all game.

“It was soon clear that Kerevi loved being the safety net for Cooper, who often unloaded passes to him that put Kerevi under huge pressure. Far from then regarding the ball as a hand grenade with the pin out, Kerevi relished the chance to show that while the Boks may be giants, many are also leaden-footed.

“So game, set and match to Cooper and Rennie, and a grovelling apology from me for being so cynical about Cooper’s return.”

“It was an endlessly frustrating match for South African observers because the Springboks were their own worst enemies,” he wrote.

“Instead of taking a step up from their series win over the Lions and their two solid victories over the Pumas, the Boks lurched backwards, making a mountain of uncharacteristic errors on defence while usually dependable playmakers such as Handre Pollard and Lukhanyo Am were curiously off colour.

“Champion teams close out games like this but the Boks could not put away a Wallabies team that was as courageous as it was niggly and obstructive off the ball.”

Greenaway said the the result asks questions as to why the Boks can’t rise to the occasion on Aussie soil.

“They hadn’t won in Australia since 2013 and this was their first match outside of South Africa as world champions… but they failed their big test,” he wrote, without providing many answers.

Springboks coach Jacques Nienaber made some brave substitutions late in the game, but left Damian Willemse to take over kicking duties from Handre Pollard, himself wasteful from the tee, at the death. He missed a conversion with eight minutes to go that, if successful, would have meant Cooper’s late shot would have been for the draw instead of a win.

Former Springboks captain Victor Matfield questioned the inclusion of Willemse on the Springboks bench, although he had made a try saving intervention minutes before Cooper’s winning kick.

Matfield was critical of Willemse in his post-match comments on SuperSport, saying he wasn’t sure that Willemse is “a great player”, and that the kick he missed “wasn’t difficult”.

“Tonight we were just a little bit off,” Matfield explained to the SuperSport panel during the post-match show.

“So we need to pick ourselves up, even have a look at the bench.

“I’m not sure that Damian Willemse is a great rugby player. Is he ready to take over from Handre Pollard if he goes off at 10? Handre never has an off day so normally you would play him through.

“Is he the right guy you want there at the end with a kick for poles? It wasn’t a difficult kick. He kicked it way right.

“Shouldn’t there be someone who is a 90 percent kicker on the bench?”

Lloyd Burnard, writing for news24.com, said: “It is often said in elite sport that a sign of a championship winning side is an ability to win even when playing poorly, and that was not the case here.

“Error-ridden, ill-disciplined and nowhere near the clinical standards that made them 2019 World Cup winners and, more recently, British and Irish Lions series winners, the Boks were poor, and they were punished.”

Paul Cully, writing for stuff.co.nz, said that Quade Cooper’s heroics aside “the other story was the paucity of the Springboks’ attack.”

“Time and time again, the world champions treated possession of the ball as though it was something to be feared,” he wrote.

“It made you wonder if the Springboks’ recent success – they are the no.1-ranked side on the planet, the world champions and conquerors of the British and Irish Lions – has narrowed their vision a bit.

“On Sunday, it appeared they believed they would have to do little else but kick high, scrummage hard, and wait for chances to get their formidable maul working.

“They were almost right, too. Had Cooper not shown nerves of steel at the end, the Springboks would have celebrated another grinding win as vindication for their methods.

“However, they will have to go back to the drawing board before the return test against the Wallabies next week, never mind the two tests against the All Blacks that will follow.”

Cully, looking ahead to the coming battles between New Zealand and South Africa, said the “Springboks are still to be admired greatly. In spells against the Wallabies, they were brutal and ferocious, particularly when replacement flankers Jasper Wiese and Marco van Staden took to the field.

“Yet, they were also one-dimensional, and far too reliant on opposition mistakes to get them into the game. The world champions have their limitations, and it only took a good but not perfect Wallabies performance to expose them.”