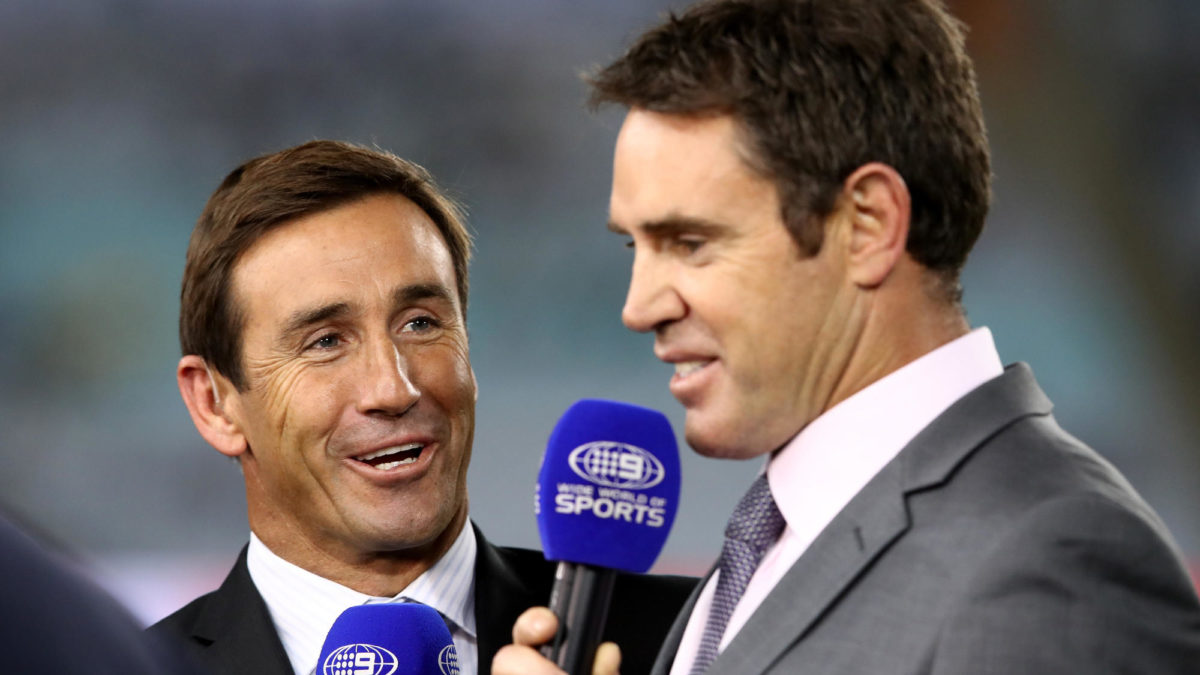 I make a mean potato bake. This doesn’t mean I should host a cooking show. The same goes for ex-players and coaches who become footy commentators.

I appreciate that they understand the game better than most. They have lived it, breathed it, and know it inside out. But that doesn’t mean that they are the right person to publicly analyse it.

It’s not enough that you were a fantastic player, legendary coach, or even just one of the nice guys of the game. To have a job in the media where your main role is speaking, you should be articulate, engaging, possess a wide vocabulary and not be biased.

I’ll give you a minute while you go through the current crop to see who fit the criteria.

Let’s go through some of the ‘talent’.

You have Greg Alexander, who should never be allowed to call or speak about a Penrith game ever again. The one-sided comments he makes about his Panthers are just laughable. And you just know you are in for 80 minutes of unfair commentary if he is calling the game for a team he doesn’t like.

Then there is Braith Anasta, who has given us some pearls of wisdom such as:

“They play every single play.”

“It was an air swing. He obviously touches it, but only just.”

“I haven’t seen one smile. Not one.” (Everyone in the coach’s box was wearing a mask.)

“His kick wasn’t deep enough. Or it was too deep.”

And my personal favourite: “They need to play footy here. There’s no other choice.”

We have Shane Flanagan, who seems to turn every segment into a job interview for a coaching role.

There is obviously an issue with Steve ‘Blocker’ Roach commentating, because fans are always asking on social media for a translator.

And despite how much we all love Johnathan Thurston and know he has a lot to say about the game, there are only so many times he can go “um, ahh, um” before you question why they gave someone who seems petrified of public speaking a microphone.

Then we have those who don’t lack any confidence: Phil Gould, Andrew Johns and Paul Gallen.

This group of league legends could have us hanging on their every word with their insight and knowledge. But many fans find that their bias, arrogance and constant use of cliches make them want to switch off instead of tune in.

Don’t get me wrong, there are some that have transitioned well from being in the game to talking about it. Corey Parker, Laurie Daley, Billy Slater, Cooper Cronk, Ryan Girdler, Michael Ennis and James Graham come close to ticking all the boxes.

They know what they are talking about, express their points of views clearly and intelligently, and despite their obvious love for their affiliated clubs, are able to push it to the side when discussing a game.

You may not agree with them, but they usually bring clever, fair and valid points to the conversation, and they deliver them well.

And of course, there is Peter Sterling. Many will miss his expertise since announcing that he will step away from the media at the end of the year.

There needs to be a bit of light-heartedness and humour, and those like Matty Johns, Bryan Fletcher, Nathan Hindmarsh, Paul Vautin and Darryl Brohman bring the laughter.

But when you just want to hear an insightful discussion about the footy or listen to a great call, you don’t want to have to put up with the likes of Geoff Toovey screaming and carrying on because that is the only way he seems to be able to communicate.

There is a reason that Ray Warren and Andrew Voss are at the top of the commentators’ list. It’s because they are commentators.

I’m not saying that ex-footy players or coaches cannot be commentators. As I have mentioned there are some that have successfully made the switch.

The correct ones for the role need to be carefully selected and trained. Not just be the next retiree off the rack.

With so much knowledge and wisdom to share, we have a lot of legends of the game that have the potential to make great commentators.

But they may need some fine tuning first. They should complete some form of media training after their footy careers have finished – and before they are given the green light to move into broadcasting.