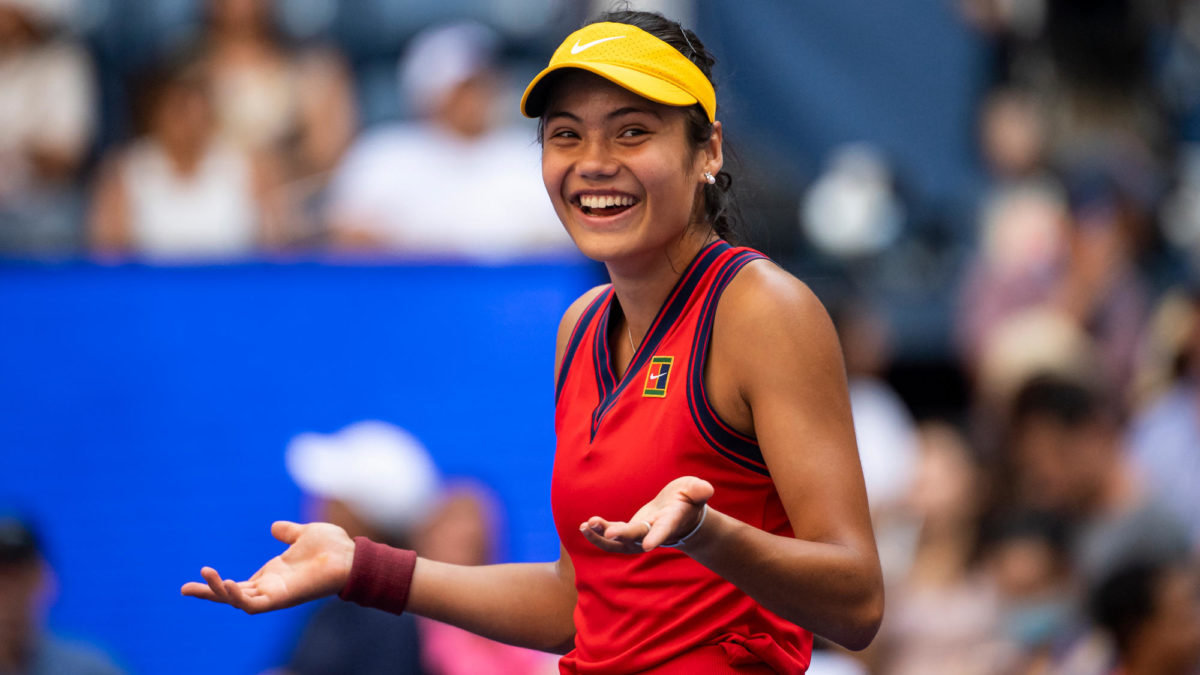 This time three months ago, nobody had ever heard of Emma Raducanu.

But now she is the newest darling of the tennis universe, after emerging from qualifying to win her first grand slam title following a clinical and hard-fought straight-sets victory over fellow teenager, Leylah Fernandez, in Sunday morning’s (AEST) US Open women’s final.

At the start of the fortnight, not a single tennis fan would’ve forecast that this was how the year’s final major would be decided, but after several pre-tournament favourites crashed out progressively after the first two rounds, excitement grew at the prospect of a new champion.

It started with Fernandez upsetting defending champion Naomi Osaka on Friday night (Saturday morning AEST), having broken the Japanese star when she was serving for the match late in the second set, having not forced a break point on Osaka’s serve up to that point.

Subsequent wins over 2016 champion Angelique Kerber, fifth seed Elina Svitolina and title favourite Aryna Sabalenka saw her enter her maiden major final in her seventh appearance, and all of America jumped on the bandwagon to see if she could ultimately go all the way.

Standing in her way, however, was the British qualifier Raducanu, who had captivated the hearts of millions of home supporters with her run to the fourth round at Wimbledon, which ended in heartbreak as she was forced to retire due to a health issue.

But nobody could’ve anticipated the history-making run she would make over the past three weeks at Flushing Meadows.

After winning three rounds of qualifying (which were held behind closed doors due to COVID-19 restrictions) to make the main draw, the Briton capitalised on a section of the draw thrown wide open by top seed Ashleigh Barty’s early round exit to emerge as the quarter-finalist from the top quarter.

Many thought her run would come to an end when she met Belinda Bencic in the last eight, but she would display maturity beyond her years to send the Olympic gold medallist packing, then produced a clinical performance by thrashing Maria Sakkari in the semi-finals.

Given how both Raducanu and Fernandez managed to win their way through to the final, with the former not dropping a set and the latter having claimed the scalps of two former champions and another two top-five seeds, it was going to be hard predicting a winner with any real confidence.

Raducanu won the pre-match coin toss and elected to serve first, and after holding her service game she would break her opponent’s serve in the next game, establishing a 2-0 advantage.

But the Canadian, whose heritage saw her enter the match as the fan favourite, broke right back, and games remained on serve until the tenth game when the Brit hit a forehand winner on her third set point to take the first set 6-4.

To this point of the tournament, Raducanu had not yet dropped a set, while Fernandez was going to have to endure a fifth consecutive three-set match to stay alive. Inevitably, one of those would have to end.

Toronto native Raducanu (she was born in Canada before moving to Great Britain at the age of two) served an ace and held to start the second set, then brought up three break points in the next before Fernandez fought them off and held for 1-all.

The Canadian then broke for a 2-1 lead, and it appeared set that she would force a deciding set, but a brilliant backhand winner from Raducanu on break point in the next game saw the set put back on serve for 2-all.

Raducanu would win the next three games on the bounce to establish a 5-2 buffer, leaving Fernandez to have to serve to stay in the championship. The Brit would bring up two championship points, but the 19-year-old would hold her serve, delaying the inevitable.

At 30-all in the ninth game, Fernandez brought up a break point, during which the umpire stopped play afer noticing blood dripping down the Brit’s left knee. Replays showed that the 18-year-old had grazed her knee on the court.

Raducanu saved two break points, and then brought up a third championship point which she would convert with an ace to complete modern tennis’s greatest teenage fairytale in just under two hours.

With the victory, the 18-year-old will rise from a pre-tournament ranking of 150 to 23 (a rise of 127 places), and will also unseat Johanna Konta as Great Britain’s top-ranked player after six years.

She is also the country’s first major female champion since Virginia Wade won Wimbledon in 1977, and at the US Open since 1968.

Raducanu is the youngest female major champion since Maria Sharapova won Wimbledon aged 17 in 2004, of any gender since Rafael Nadal won the 2005 French Open two days after turning 19, and the third player born after January 1, 2000 to mount the grand slam dais.

Further, she became the first qualifier to reach a major final, let alone win one, and also became the first woman to triumph at Flushing Meadows without dropping a set since Serena Williams won the most recent of her six titles in 2014.

Winning in just her second grand slam main draw appearance has also halved the previous record set by Andreescu, who triumphed in the Big Apple in only her fourth appearance two years ago (to date, it is the only time she’s progressed beyond the fourth round of a major).

As for Leylah Fernandez, it was a bittersweet end to a breakthrough tournament in which she captured the hearts and minds of the tennis world with a never-say-die attitude which saw her claim the scalps of three top-five seeds, including defending champion Naomi Osaka.

As we saw in the final, despite the straight-sets scoreline, she refused to throw in the towel at any point, as evident when she broke early in the second set and fought off two match points in the eighth game before being aced on the third in the ninth game.

This won’t be the last we hear of her, and she has promised that she will be back in the final one day, hopefully holding the trophy. With her run to the final, she will rise to as high as 27th in the world rankings, though victory would’ve seen her crack the top 20.

The performances of both players throughout the fortnight, and in the championship match, was another perfect advertisement for women’s tennis and could be seen as a preview of what fans can expect going forward.

The men’s singles champion will be decided when Novak Djokovic aims to complete the first grand slam calendar sweep since Rod Laver in 1969 when he comes up against Daniil Medvedev in Monday morning’s (AEST) men’s final.

We also have the women’s doubles final, in which the pairing of Samantha Stosur and Zhang Shuai will come up against the all-American pairing of Coco Gauff and Caty McNally, while Dylan Alcott will attempt to complete a golden calendar grand slam when he comes up against Niels Vink, whom he defeated in three sets in the semi-finals of the Tokyo Paralympics, in the wheelchair quad singles final.

In the wheelchair women’s singles final which precedes it on Louis Armstrong Stadium, top seed Diede de Groot of the Netherlands will also attempt to complete a golden calendar grand slam when she comes up against Yui Kamiji.

Matches to watch on Day 14