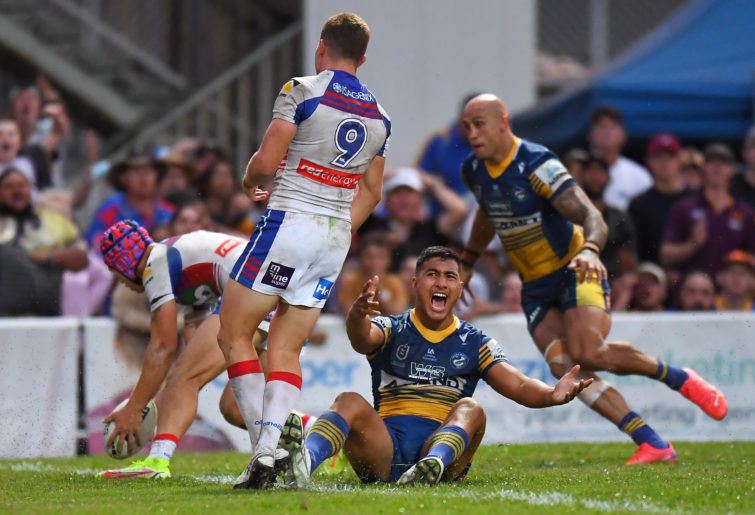 The Parramatta Eels have secured their place in the semi-finals, knocking the Newcastle Knights out of the NRL finals in a hard-fought 28-20 victory that went right down to the wire.

This was classic finals footy, two teams ripping and tearing at each other in what was a proper war of attrition, with the Eels ultimately proving the more resilient side.

And this is worth me clarifying: the better team won. Parramatta deserve to be going through to face the Penrith Panthers next weekend.

But tell you what…

It’s not a penalty try if it’s a knock-on
With just over three minutes left, the Eels ahead 22-20, and Parramatta hammering the Knights’ line, Clint Gutherson put a sneaky little grubber through. It looked for all money that Will Penisini would pounce to score.

Instead, Knights winger Enari Tuala grabbed Penisini without the ball, allowing Kalyn Ponga to scoop it up and take the pill dead.

Referee Ashley Klein sent it upstairs and we watched with bated breath – had Tuala stopped a certain try-scoring situation or just committed a professional foul?

Or, to put it more succinctly, were we looking at a definitively match-deciding penalty try or a sin-binning and penalty that could potentially help Parra to ice the game?

Or was it neither?

See, rather than scud the ball through, replays showed that Gutherson had aimed to drop the ball to his boot but failed to make initial contact, the Steeden hitting the grass before the Parra skipper was able to connect.

Surely that means it was a knock on. The King didn’t try to drop-kick it: he dropped it, then kicked it.

Yet in scenes that Knights fans will be left to fume over for months to come, the video ref watched it, but was seemingly only concerned with whether Penisini was onside.

He was. And Tuala tackled him without the ball. And Ponga was never going to get to it before Penisini to stop a try being scored.

If that’s all that mattered, then no worries. Except Gutherson knocked it on.

Will Penisini appeals for the Eels’ crucial late penalty try against the Knights. (Photo by Albert Perez/Getty Images)

Knights coach Adam O’Brien made his opinion clear in his post-match press conference; replying, “I’ll save meself some cash” when asked what he made of it all.

Brad Arthur similarly ducked the question, responding: “It’s a try. If [Penisini] picks it up he scores, doesn’t he?”

Well, yeah. Except if Gutho knocks it on…

What do the rules say?
For Knights fans, I reckon I’ve got the bad news that puts this to bed.

In the wash-up, there were plenty of references to Billy Slater’s similar 2018 drop-kick in a controversial win over the Broncos.

So I dug that one up.

“For this to be a drop-kick the ball must be intentionally released from the hands and then kicked immediately (after) it rebounds from the ground,” then-referees boss Bernard Sutton said in the wash-up of the 2018 match.

“It’s important to note that a drop-kick can occur at any time during a match and does not have to be an attempt at a field goal.”

So if the test is “intentionally released from the hands and then kicked immediately (after) it rebounds from the ground”, well, that pretty well sums up Gutho’s kick.

To be totally certain, I went to see if the rules had changed since 2018.

What I found was an admittedly dated set of rules, but according to the July 2020 rules, a drop kick is described as “a kick whereby the ball is dropped from the hands (or hand) and is kicked immediately it rebounds from the ground.”

No mention of trying to slot it between the crossbar. Just gotta be intentionally released and hit on the rebound.

Which is what Gutho did.

Mitch Moses shuts the critics right the hell up
Mitchell Moses has been hammered by the critics (ahem, ahem) over the past few years, with the knock being that he was a flat-track bully – good for plenty of points against the lower-placed teams, but unable to step up when it mattered.

Well it mattered today. And Moses was immense.

The Parra halfback was in everything good his side did, scoring a freakish individual try from 40-odd metres out, making the break that set up Blake Ferguson’s first try, and then throwing the cut-out ball that led to Ferguson’s second.

Mitchell Moses breaks away to score a try during the NRL Elimination Final match between Parramatta Eels and Newcastle Knights. (Photo by Albert Perez/Getty Images)

Moses was in decent touch with the boot as well, kicking four from five off the tee.

All up, he was good for 12 points, a line break, a line-break assist, a try assist and five tackle breaks, tackling at 93.8 per cent efficiency as well.

And in matters that can’t be determined by stats, he was right up there. His body language was just super positive and – look, I don’t know how else to put this – his eyes looked bright throughout. There was a winning gleam that was physically visible.

I haven’t seen Mitch Moses look that way in big-stakes games before. For The Roar, Moses gets the man-of-the-match gong.

Do I retract my previous comment that he “can’t lead Parramatta to the promised land”?

The winning team’s total run metres of 1867 over the Knights’ 1439 tells you part of the story, but it’s where those extra 400 metres were made that made the difference.

The Eels were hammering the ball up through the middle third of the field, ensuring their play-makers’ fith-tackle options were either for attacking raids or suffocating, ball-in-the-corner kicks.

As for the Knights, I daresay the majority of their metres were earned in their own 20. They just spent so much of the game in yardage, trying and largely failing to slog their way out of their own red zone.

Both sides were out on their feet by the time we hit the final quarter, having played the game in the kind of heat you’d expect of Rockhampton in September, but you’d have to think the Eels just had a little bit more left in the tank that proved the difference.

Five minutes that blew that game apart
At the 34th minute, the Knights were ahead 10-6, despite the Eels having had the majority of possession.

But in the final five minutes of the first half, everything was turned on its head.

First, Moses took the defence on from 40 metres out in a brilliant individual try that reminded us all just how fast he is, then in the ensuing set the Parra No.7 made a break up field and got a quick play-the-ball that saw Blake Ferguson dive over in the corner.

Boom, suddenly it’s 16-10; and the advantage the Knights had, courtesy of a stiff breeze at their backs, was completely overhauled.

I wrote all of the above in the halftime break, so sure was I that it would be five minutes that determined the outcome (yay, pats on the back for me, but it was pretty clear).

Newcastle’s mentor saw it as such as well, O’Brien saying of the penalty try: “The two tries before halftime, they hurt us more than that one.

“We’d like to have the five minutes before halftime back again, [it] just cost us the game.

“We switched off mentally and came up with some system errors.”

Arthur similarly recognised the importance of those 300 seconds, saying, “We built our game and got our rewards at the back end of the half.”

Tyson Frizell’s Boyd Cordner moment
In the eighth minute, Tyson Frizell got his head in the wrong position when trying to make a tackle and copped Reagan Campbell-Gillard’s hip to the head.

Frizell appeared well and truly rattled as he regained his feet, staggering backwards into a teammate, walking like Barney Rubble with his arms dead at the side of his torso.

Tyson Frizell leaves the field with the trainer after suffering a head knock. (Photo by Albert Perez/Getty Images)

You felt sick for the bloke. And two tackles later, Ashley Klein blew time off.

“That was two tackles too long,” Brad Fittler said in commentary.

Frizell left the field, and any logical footy fan would have thought that was the end of the former Dragon’s day.

But minutes later, the Knight returned to the fray.

I’m not questioning anyone’s professionalism or integrity. What’s more, Frizell’s performance upon his return would suggest he was fine. But then, rugby league’s dinosaurs love to wheel out yarns about how they staggered to their feet concussed, then played the game of their lives.

But in 2021, when a player gets to their feet as groggy and disoriented as Frizell did, that’s the end of their day. Because it should be.

I fancy this is going to be pulled apart in far more detail in the days to come.

Are Parra exactly where they want to be?
They’ve won their second finals game in, I believe the official length is ‘bloody ages’; and, having put an end to the Storm’s hopes of setting an unprecedented 20 straight wins only two games before this, you have to wonder if Arthur has actually got his side where he wants them.

Because a win over Penrith next week – and the blue and gold going to be underdogs in that match, so don’t think I’m pretending that’s a given – would have them roaring into a game against the reigning premiers. Who, again, they beat only two weeks ago – and convincingly at that.

Sunday’s was a hard win, and the Eels will be sweating on the match review committee to decide who they’ve got on hand to face Ivan Cleary’s boys. Junior Paulo, Marata Niukore and Waqa Blake have all been placed on report for incidents against the Knights; lose one or more, and toppling the Panthers becomes a mighty tough ask.

But they’ll be full of belief that they can get the win against their western Sydney rivals… and then go on to get the chocolates against the almost-all-conquering Storm, who they’ve beaten in both meetings this year.

But I’ll be cheering Brad Arthur’s boys on.