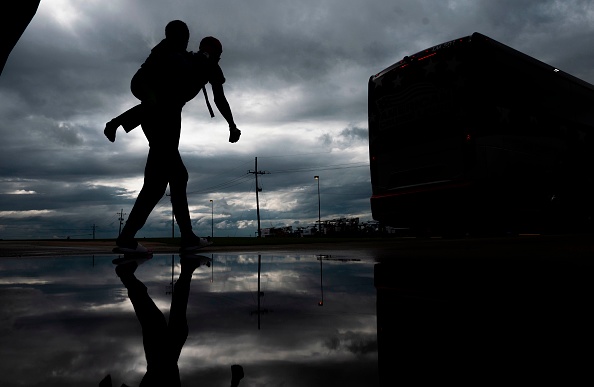 Night has fallen across the entire Gulf of Mexico and the coastlines surrounding it. Meanwhile, Hurricane Ida is fiercely gaining intensity into midnight, and its landfall along the Louisiana-Mississippi border on Sunday could be more impactful than Hurricane Katrina, whose 16-year anniversary mark is also Sunday.

The last update from the National Hurricane Center on Saturday indicated that Ida is still a Category 2 storm packing sustained winds of 105 mph. However, the eyewall of Ida has become more defined, and the storm has begin looking like some of the monsters that have clobbered the Gulf Coast in years past.

The latest forecast on Saturday had Ida as a Category 2 storm. The next forecast by the National Hurricane Center will be at 1 a.m. CT. Storms hit category 3 status when the sustained winds are at least 111 mph, and Category 4 storms begin at 130 mph. A Category 3 or 4 by sunrise is not out of the question as Ida roars toward the Louisiana and Mississippi coasts.

Though Ida is moving as a Cat 2 storm in the night, it’s moving across very warm waters in the central-to-northern Gulf, with water temperatures at 84 degrees or higher. That’s like adding more kindling to a fire that’s just getting hot.

Several parishes in southeast Louisiana issued mandatory evacuations, but many who live in South Louisiana have already begun their own evacuations—something ignited by the shellshock of Katrina, and one menacing storm after another over the last fie years, 10 years, 16 years and last century.

Louisiana Gov. John Bel Edwards said Saturday that Hurricane Ida could be one of the most devastating storms to hit the state since the 1850s, which is before the U.S. Civil War.

“One of the things we were told today by the National Weather Service during our unified command group meeting is that they are are extremely confident in the current track and the intensity as forecasted for Hurricane Ida. And you don’t really hear them speaking very often about that level of confidence,” Edwards said.

“So, we can sum it up by saying this will be one of the strongest hurricanes to hit anywhere in Louisiana since at least the 1850s.”

Ida formed as a tropical storm in the Caribbean Sea a few days ago and gained intensity as a Category 1 storm Friday as it moved over Cuba. By Saturday afternoon, as the storm was moving northwest of Cuba, the outer bands reached from Cuba to Lafayette, Louisiana, and all the way east to the Naples and Fort Meyers region of southwest Florida.

Hurricane Katrina took a similar path as Ida in 2005, moving over South Florida and the Florida Keys as a Category 1 storm before quickly growing into a Category 5 storm aiming for New Orleans. Katrina dropped in windspeed and eventually shifted east and battered the Mississippi coast as a high-level Category 3 storm, wiping out towns like Pass Christian and Long Beach.

Katrina’s rainfalls in southeast Louisiana, and specifically New Orleans, caused a levee to breach, completely flooding the city’s Ninth Ward, some houses with water on the second levels.

Flights going in and out of Louis Armstrong Airport in New Orleans on Sunday have already been canceled. Edwards and local officials are warning residents who have not evacuated that time is running short, and to either go north or hunker down and hope for the best.

“We can also tell you that your window of time is closing, it is rapidly closing,” Edwards said. “By the time you go to bed tonight, you need to be where you intend to ride this storm out and you need to be prepared as you can be.”

Hurricane Katrina landed as a Category 3 storm in 2005, with its eyewall going just east of Louisiana and thrashing the Mississippi coast line. There were more than 1,800 lives lost in the aftermath of Katrina.