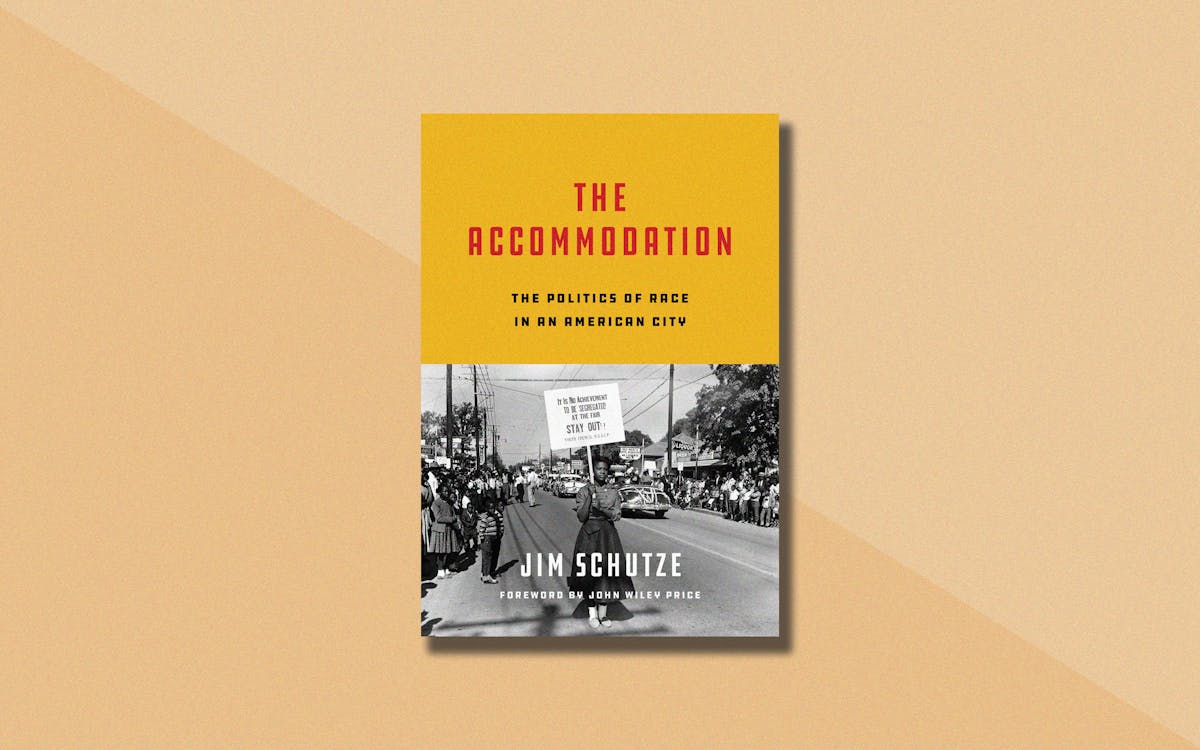 When I first moved to Dallas from Berkeley in 1996, my journalist friends were quick to tell me about Jim Schutze’s The Accommodation. They said the two-hundred-page nonfiction book was the real, uncensored story of how Dallas managed to avoid the far-reaching changes wrought on other major cities by the civil rights movement. When I asked if I might borrow a copy, they looked at me askance. The book had been out of print for nearly a decade; those lucky enough to own a rare copy tended to guard it closely. After I finally pried one away from a colleague at The Dallas Morning News, I was almost afraid to open it, for fear I might drop it, or tear a page.

No need to worry now. A new edition of The Accommodation: The Politics of Race in an American City, updated by the independent Dallas company Deep Vellum Publishing, will be released September 7. (You can still pay $600 for a signed first edition at Biblio.com.) In its pages lies the story of how the city, led by its secretive Dallas Citizens Council, kept the civil rights movement largely at bay, mostly by currying favor with an elite group of Black ministers and establishing housing enclaves for the Black middle class, while leaving the poor behind.

In short, according to The Accommodation, during the height of the civil rights movement in the fifties and sixties, Dallas took a “nothing to see here” approach—no major riots, few protests—engineered by the city’s power structure. As Schutze, who is white, says by phone from his East Dallas home, “The Black leadership said, ‘Okay, you give us a place where our middle and upper classes can live. And we’re not going to be as hard on you as Black communities have been in other cities.”

In Schutze’s view, this devil’s bargain was bad for the city’s soul. It kept Dallas from developing as much of a social consciousness as other cities of its size and power. “Dallas asserted that it had never had racial turmoil,” Schutze says, “and that it was the astuteness and cleverness and wisdom of the city fathers that let them duck the civil rights movement.”

The Accommodation portrays the members of the Dallas Citizens Council as the architects of this myth. Founded in 1937, made up of influential business leaders—bankers, publishers, entrepreneurs, ministers—the Citizens Council all but ran the city, often through backroom deals. It raised money to improve Dallas’s schools, to found the UT Southwestern Medical School, and to create the city’s public transit system. But, in Schutze’s telling, the council and other white power brokers also worked to keep racial protest at bay, largely by placating the Black middle class. In the 1950s, several Black homes in South Dallas were bombed, and the city razed part of Elm Thicket, a predominantly Black neighborhood that lay in the path of an airport expansion. Rather than address the violence and discrimination head-on, prominent businessmen found a way to make the problem go away. They created Hamilton Park, a comfortable, segregated community in North Dallas (Schutze calls it “a Black middle-class ghetto”). Those who couldn’t afford the home prices were out of luck. The Accommodation exposed these machinations—and the council didn’t like it.

In the eighties, Schutze, now 75, was a relatively new city columnist from Detroit, writing for the Dallas Times Herald. He worked on The Accommodation at night. But his coworkers caught wind of the project. Word was this carpetbagger was working on a dirty book about Dallas. One of Schutze’s more resentful colleagues, a Dallas native, went to Alex Bickley, who was then executive director of the Dallas Citizens Council. “He told Bickley that there was this Yankee, hippie, liberal guy at the paper who was writing a book to make Dallas look bad, and it was going to be published by Taylor Publishing,” Schutze recalls. Indeed, Schutze had a deal with Dallas-based Taylor, known as the nation’s largest publisher of high school yearbooks, which was then trying its hand at trade books. “And now,” Schutze says, “the story gets gray.”

Here’s what he’s been told over the years: Bickley, who died in 2008, went to Taylor and told the company not to publish The Accommodation. Taylor, which already had begun typesetting the book, told Schutze that presales were slow, so it was canceling his deal. The book was then picked up by an independent New Jersey publisher, Lyle Stuart, which was known for releasing incendiary works. Stuart published five thousand copies in 1987 and shipped them to Dallas. According to Schutze, half of those allegedly burned up in a warehouse fire, making the other 2,500 instant rare books.

Schutze began to realize The Accommodation might have a second life when activist groups in Dallas’s North Oak Cliff area increasingly asked him to make speeches and public appearances, starting around 2005. They knew Schutze as a caustic columnist for the alt-weekly Dallas Observer, and they’d gotten their hands on PDF versions of the book. “They were diverse, but mostly white, young refugees from the suburbs who had moved into the city and were just very curious about why the city was the way it was,” Schutze says. Last year, an anonymous Twitter account even began quoting the book, one sentence at a time.

Ask around about The Accommodation, and you’ll get a lot of “off the record.” Here’s what Deep Vellum executive director Will Evans has to say on the record: “I think this book deals with Dallas leadership and decisions that were made, and it is critical about those decisions, and I think that led to the book being suppressed.”

Evans, who founded Deep Vellum in 2013, is a key figure in the return of The Accommodation. With his yen for publishing international writers in translation and his elaborate tattoos of Russian authors (Pushkin, Gogol, and Mayakovsky adorn his left arm), Evans has brought a sense of literary zeal to the Dallas scene. When he heard about Schutze’s book and read a PDF that was making the rounds, he wanted in. “In a lot of ways, this is the book that Deep Vellum was founded to publish,” he says. “To set up a publishing house doing literary work about underrepresented stories from around the world, whether that’s Moscow or Lubumbashi or Jakarta or Dallas, Texas, that’s what we’re for.”

The demand was clearly there, as a new generation of young Dallasites continued to find out about the book, often reading emailed copies of the PDF. Schutze and John Wiley Price, a civil rights advocate and Dallas County commissioner, unsuccessfully shopped the manuscript around to publishers. So in 2020, when Evans approached Schutze and Price, all three men agreed it was time.

Price has been on the Dallas scene since the seventies, living and brokering power at that intersection of race and politics. He is quoted at length in The Accommodation, and he wrote the foreword to the new edition. In it, Price suggests that some of the same problems that plagued the city in the sixties persist today. “Dallas’ wealthy and elite leaders … have a knack for selecting the right minority to validate their inclusion efforts,” he writes. “Meanwhile, the masses of Black and Brown people who make up most of our population remain locked out of the vault of opportunity.”

Schutze sees more opportunity for people of color in North Dallas and nearby suburbs, but discrimination lingers in South Dallas in terms of access to good schools, housing, business loans, and mortgages. As the Dallas Business Journal recently reported, Black and Hispanic residents of South Dallas are far more likely than whites to live in older, poorly maintained homes. “South Dallas remains there as this horrific footprint of a very intentional policy,” Schutze says.

Price acknowledges that the Dallas Citizens Council doesn’t wield the same clout it once did, and that the government now includes three Black city council members and a Black mayor, Eric Johnson. But, he believes, “nothing substantial has changed,” especially in the city’s economic inequality.