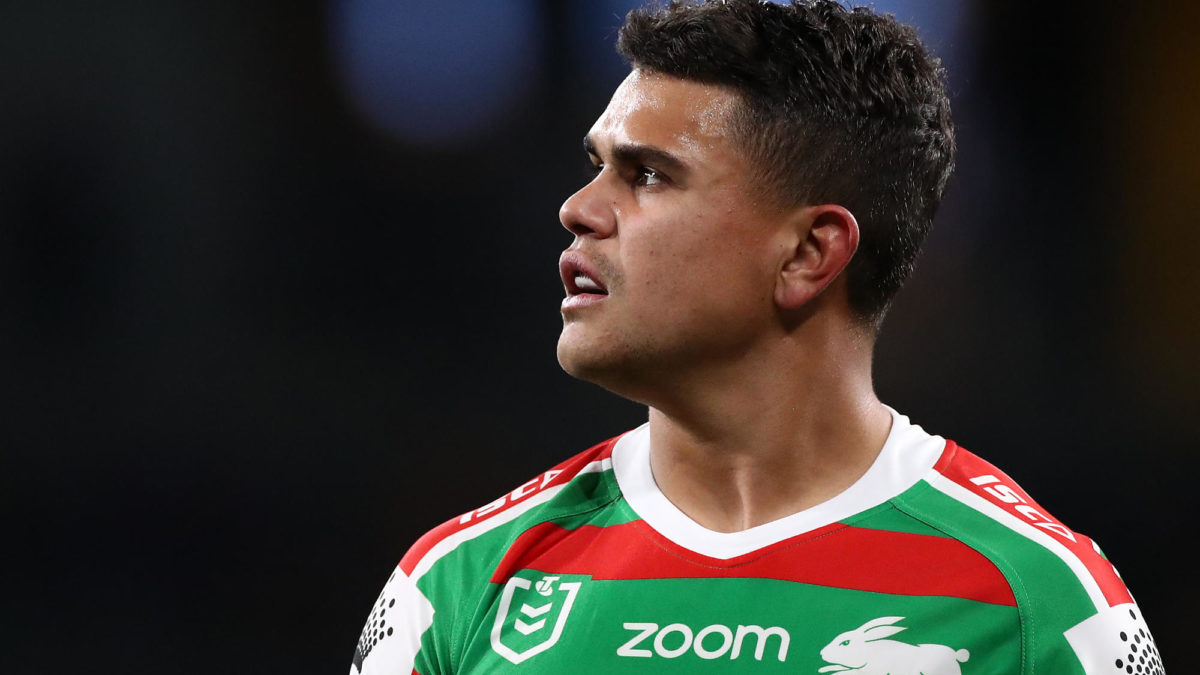 Latrell Mitchell needs a miracle at the NRL judiciary to save his season with the South Sydney superstar facing up to nine games out for the hit that floored Joey Manu.

The NRL’s match review committee came down hard on Mitchell on Saturday, slapping him with a grade-two reckless high tackle charge for his ugly shot.

It was one of three charges levelled against Rabbitohs players, with Liam Knight also facing between two and three games out for a hip drop that injured Siosuia Taukeiaho.

Bunker review official Henry Perenara was axed from Saturday night’s match after failing to order Mitchell sent off during the game. NRL head of football Graham Annesley told Sydney radio that Mitchell should have been sent off.

Henry Perenara has been replaced as senior review official for tonight’s Storm-Eels match.

In further fallout, Manu was in hospital having emergency surgery on Saturday for his fractured cheekbone, while his coach Trent Robinson, who has a suspended fine hanging over him, is facing an inquiry over his post-match comments.

Souths’ Dane Gagai is also facing a $1600 fine for twice swearing at referee Ashley Klein after he was sin-binned late in the match following a melee.

Plenty asking about this; effectively confirms an orbital (eye socket) fracture on the spot. The puffing up is air that builds up in the nose and sinuses that escapes into the tissue around the eye through a fracture in the socket (sinuses sit around the eye socket). pic.twitter.com/rZcLokiLt4

The grade-two reckless high tackle charge against Mitchell is effectively the fifth highest possible grade out of nine that can be handed down for high shots.

Mitchell can accept the charge and cop a six-game ban, ending his season and meaning he will have a delayed start to 2022.

Downgrading the charge to a grade-one reckless high tackle would also not be enough to allow him back on the field this year, resulting in a five-game ban.

It means he would have to get the charge downgraded two levels to a grade-three careless high tackle, which would get him a four-week ban.

Even then, he would only return in the grand final if Souths lost in the first week of the finals to Penrith but then went on to reach the decider.

Adding further issues for Mitchell is if he does head to the judiciary to downgrade or fight it altogether and is unsuccessful, the ban will extend to nine games and well into 2022.

Mitchell’s plight is not helped by the fact he has four priors, three of which came in the one game this year against Wests Tigers as well as a striking charge against the same opponent in 2020.

It comes after the Rabbitohs led calls for judiciary reform earlier this year, arguing loading on charges should be capped at 25 per cent.

Regardless, it represents a huge blow to the Rabbitohs’ title hopes in what was effectively a meaningless game for the club.

The 24-year-old went to another level at fullback this season, offering hope Souths could challenge title fancies Melbourne and Penrith after he missed last year’s finals series with a hamstring injury.

“We’ll have to wait and see,” coach Wayne Bennett said when asked if they could win the title without Mitchell.

“He’s a huge player for us, but we didn’t have him last year in the playoffs and I think we’re a better team than we were last year and pretty good at getting other players to play well for us in key positions.

“We’ve won a lot of games this year with a lot of players missing.”

Robinson is facing a fine from the NRL for his post-match comments where he called out Klein and Perenara and suggested Roosters are targeted by match officials.

Robinson was given a $10,000 suspended fine after the Roosters’ loss to Parramatta in May this year.

What Robinson said
“It’s shown that the NRL bunker cannot do their job this year. It’s been a farce, it’s been an absolute farce.

“To see Joey Manu get up and have to stick up for himself… that should have been stopped 10 seconds after the incident.

“It’s like the Twilight Zone up there when a Roosters player gets hit high.

“I’m just baffled… (Manu) was down for how long?

“And then it took Joey to stand up and go and stick up for himself with a depressed fracture of the cheekbone.

“And then they still didn’t want to do anything about it.

“Henry Perenara is sitting in the bunker, didn’t stop play, didn’t do anything about it, then Ashley (Klein) asked them to play on and the players went at it again.

“And then he just missed it completely… Perenara who’s supposed to know some footy, sitting up in the box, and then doesn’t’ do anything about if for 30 or 40 or 50 seconds, doesn’t do a thing about it.

“Joey Manu does something about it. It’s a common rule of this year about the NRL and the bunker not looking after our players, it’s been clear.

“They’ve changed two of the major rules this year based on the referees and the bunker doing nothing about it on Roosters players.

“The guy is off at hospital… they get forced into finally making a call on it and then they send (Mitchell) for 10 in the bin. Ten in the bin? It was laughable, it was that bad it was almost laughable.

“And then we’ve got Siua Taukaeiho… everybody knows that’s a hip drop… and now he’s got a knee injury over it. And a guy sitting in the bunker says that’s just on report.

“We had the head highs on Teddy in the Anzac Day game, then we had the knees and the bunker farce in the Parramatta game, and then the game changed. The game changed overnight.

“All of a sudden head high… we were going to protect our players.

“And then they say actually we’ll change the rules, it’s like a late hit on a halfback… so a rule gets changed again.