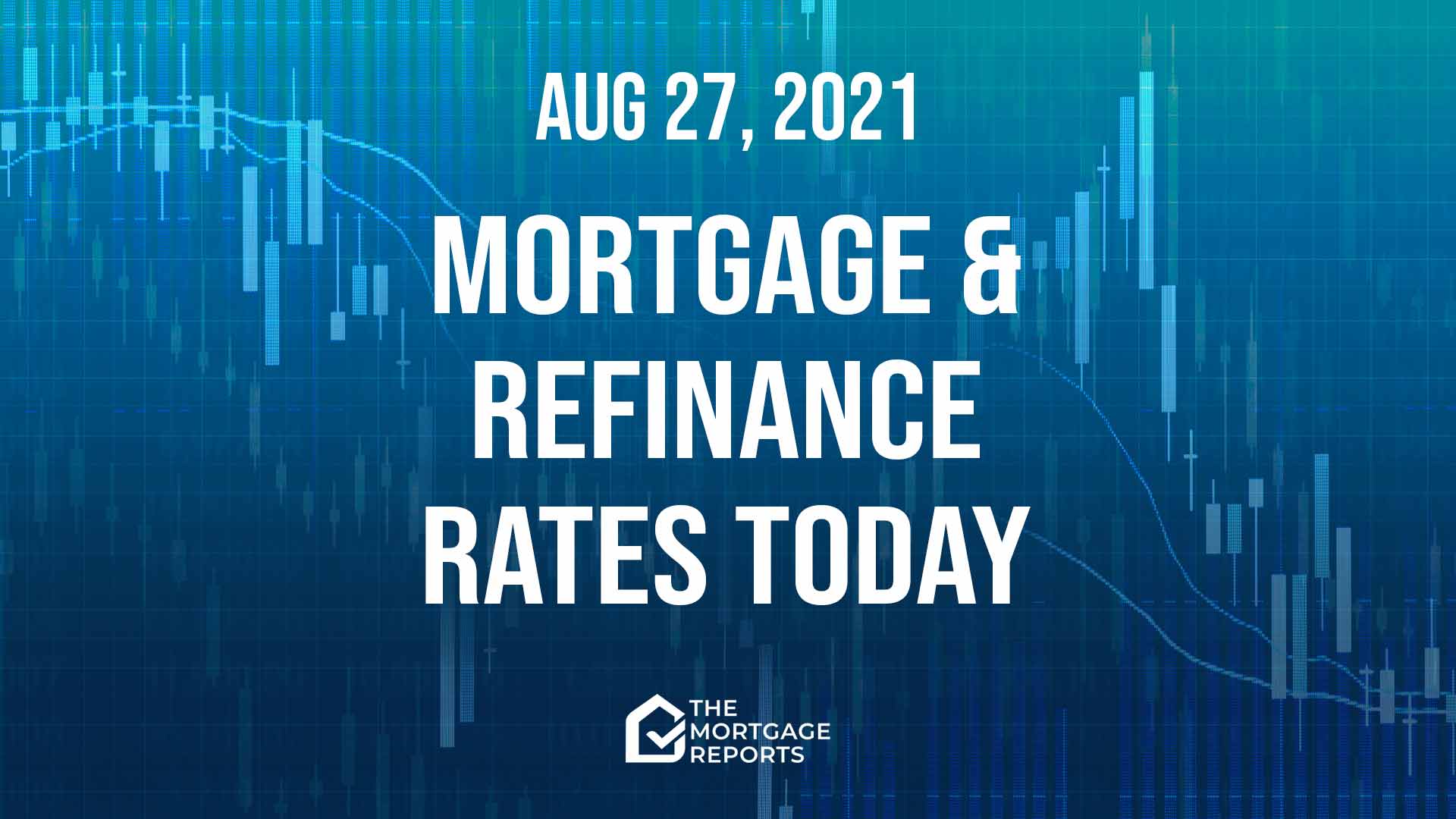 Mortgage rates today are unpredictable. That’s less of a cop-out than it sounds. Because the Federal Reserve’s chair is beginning a key speech just as this report is being published. And what he says might cause waves in the markets that determine those rates. So watch out for news reports of the contents of that speech. And read on for more details.

Watch out for news about what the Fed chair says in his speech this morning. It’s perfectly possible that he’ll say nothing new and that mortgage rates will remain unchanged. But he might provide clues as to (or even reveal) the timetable for the central bank’s tapering of its asset purchasing program. More on that below.

My basic position on locking or floating your rate hasn’t changed. I reckon the risks of floating outweigh the likely benefits. And I’d lock now. But you might legitimately take the opposite view, especially if mortgage rates turn out to be unaffected by that speech this morning.

So use markets only as a rough guide. Because they have to be exceptionally strong or weak to rely on them. But, with that caveat, so far mortgage rates today are unpredictable. But, on most days, you need to be aware that “intraday swings” (when rates change direction during the day) are a common feature right now.

So there’s a lot going on here. And nobody can claim to know with certainty what’s going to happen to mortgage rates in coming hours, days, weeks, or months.

All week, I’ve been trailing Fed Chair Jerome Powell’s speech that’s due to begin at 10 a.m. (ET) this morning. That’s because it could change everything. But it might change nothing.

Regular readers will know most of what there is to know about “tapering.” The Fed is currently keeping mortgage rates artificially low by buying huge quantities of mortgage-backed securities (MBSs), a type of bond that is by far the most influential determiner of those rates.

How huge are those quantities? Well, as of Aug. 25, the Fed owned MBSs worth $2.43 trillion. Yes, that’s trillion. Heck, that’s more than Jeff Bezos earns in a whole week!

But these purchases were only ever supposed to be a temporary measure, necessary to prop up the economy during the pandemic. And the Fed’s been signaling for a while that it wants to slow and then stop (“taper”) its purchases.

The problem for the Fed is how to taper without freaking out markets. Because the last time it announced it would taper a similar program, back in 2013, investors were deeply displeased and threw something that came to be called a “taper tantrum.” And, as a result, mortgage rates shot up.

Worse, those rates shot up immediately, just on the announcement, and months before the actual tapering began.

So, understandably, the Fed’s trying a different tactic this time. It’s been working to acclimatize (or soften up) markets by slowly dripfeeding incrementally more clear information about tapering’s possible timetable. And it’s been encouraging its top officials to voice their own opinions publicly so that the final announcement will be less of a shock.

For example, yesterday, St. Louis Fed President James Bullard suggested that the Fed should move aggressively. And he wanted the whole tapering process to be over by March 2022.

Much more important than the succession of personal opinions expressed by Mr. Bullard and his colleagues is anything said by Fed Chair Powell. And that’s why financial movers and shakers around the world will be paying close attention today.

Now, there’s a decent chance that Mr. Powell will say nothing new this morning. More likely, he’ll drop some more hints about the timetable. And there’s a remote possibility that he’ll unveil the whole plan.

If he says nothing new, mortgage rates may be unchanged or even fall a bit. If he unveils the timetable, they’ll likely rise. But, if he drops more hints, they could go either way. That will depend on how broad the hints are and how much they change investors’ expectations.

You can see why I’m saying that mortgage rates today are unpredictable.

For more background, read Saturday’s weekend edition of this column. And my colleague Tim Lucas’s longer-term forecast, Mortgage interest rates forecast and trends: Will rates go down in September 2021?

The most recent weekly record low occurred on Jan. 7, when it stood at 2.65% for 30-year fixed-rate mortgages. But then the trend reversed and rates rose.

However, those rises have been mostly replaced by falls since April, though typically small ones. Freddie’s Aug. 26 report puts that weekly average at 2.87% (with 0.6 fees and points), up from the previous week’s 2.86%.

The numbers in the table below are for 30-year, fixed-rate mortgages. Fannie’s and the MBA’s were updated on Aug. 19. But Freddie’s were last refreshed on July 15 because it now publishes these figures only quarterly. And its forecast is already looking stale.

However, given so many unknowables, the whole current crop of forecasts might be even more speculative than usual.

All these forecasts expect higher mortgage rates soon. But the differences between the forecasters are stark. And it may be that Fannie isn’t building in the Federal Reserve’s tapering of its support for mortgage rates while Freddie and the MBA are.