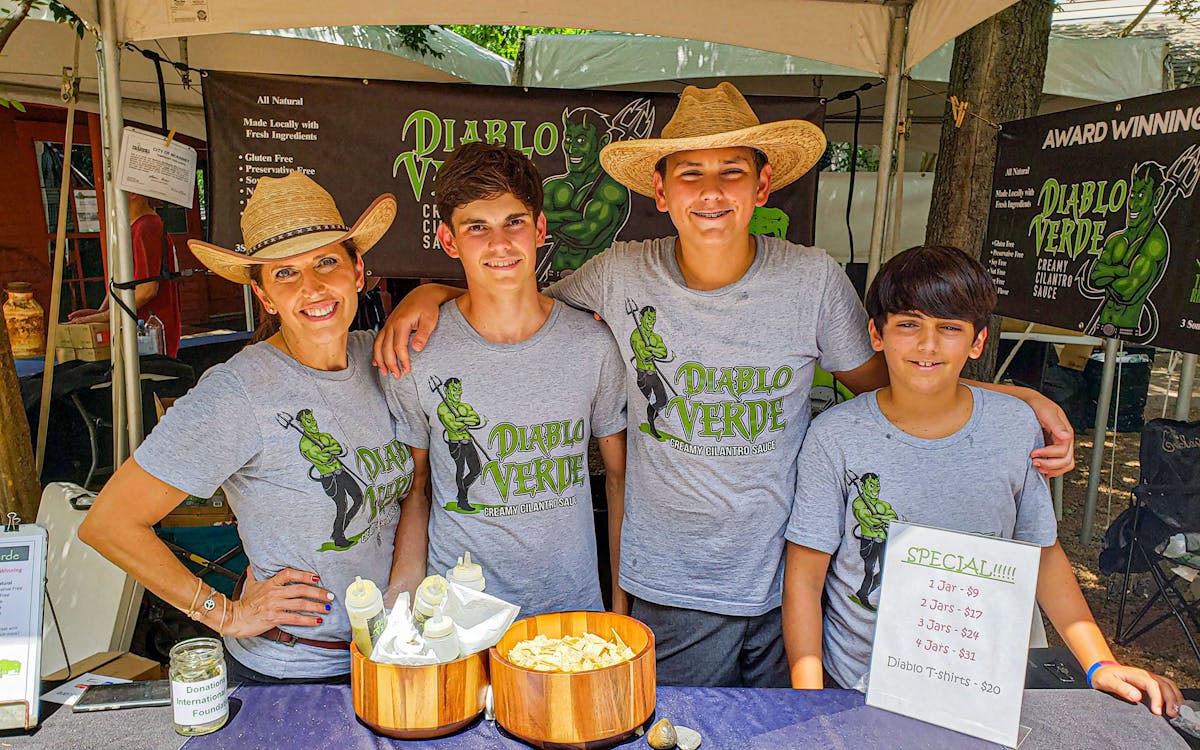 Back in 1994—around the time salsa first overtook ketchup as America’s number-one-selling condiment, and before mayonnaise took back the throne—San Antonio–based Pace Foods was famously bought by the Campbell Soup Company for $1.12 billion. Flash-forward to 2021, and salsa is still a king of the condiment aisle. Here in Texas, grocery store chip and dip shelves are stacked with rows and rows of brightly hued jars, luring in would-be buyers with placards touting award-winning recipes and “Made in Texas” provenance. At around $5 a pop for a low-margin product, such an abundance of dippin’ sauce prompts the question: How do salsa start-ups make it?

As it turns out, “making it” might not mean what you think it means. While pretty much any Texan with a grandmother has a killer dip recipe, most don’t have the courage, stamina, stomach, or requisite dash of entrepreneurial madness to launch into a business that rarely yields more than quarters per jar in profit. “It’s more like selling at least thirty to forty thousand jars per month to make a profit,” says Oscar Perez Ollervidez, founder of San Antonio–based Tío Pelon’s Salsita, putting an exclamation point on the unfortunate reality of the salsa business: it’s near impossible to make a living in it.

It’s no simple task to scale up a family recipe for the masses, and it becomes easy to understand why profits are hard to drum up when you consider what goes into churning out and marketing those 40,000 jars. According to Perez Ollervidez, the short list of necessities could include (but definitely isn’t limited to) tons of produce and thousands of jars per day, hundreds of thousands of labels per quarter, a commercial cooking facility, high-dollar production and assembly line equipment, and (just to add insult to injury) pay-to-play shelf space. That’s a lot of input for a jar of salsa that goes for $4.19 at Central Market.

At this point, “It is definitely not financial,” says San Antonio–based Dominic Mendiola of the reward gleaned from his company, Dom’s Chop Salsa. “It’s bled more from personal finances than it’s ever been a gain.”

Mendiola and his wife, Susie, started their salsa business as have many others before and since: with a crowd-pleasing recipe whipped up in their home kitchen. The couple worked in the tech industry, and Dom’s smoky sauce made from grilled tomatoes and poblano peppers was a favorite among coworkers, who went from begging for its presence at company events to purchasing it by the gallon. In 2014, several years into this labor of love (and after discovering that selling salsa made at home was a violation of Texas laws governing cottage food production), Mendiola says he got serious, hired a vendor to produce the salsa on a larger scale, and went so far as to invent and invest in an industrial-grade grill capable of cooking 1,500 pounds of produce per hour.

When his salsa got some good press in November 2015, Mendiola received a game-changing call from H-E-B’s “Boss of Sauce” condiments manager—a sought-after figure in the salsa start-up world—the same day. He says, “The next thing you know, we’re in H-E-B offices talking about how we can go from making a thousand jars for people at work to making twenty thousand jars.” By April 2016, they were on H-E-B shelves and on the road to peak production of around 100,000 jars a year.

It’s hard to talk about the Texas salsa industry without talking about H-E-B, which looms large as the dream maker or breaker in many a small business story. Tío Pelon’s Salsita founder Perez Ollervidez got his start on the farmers’ market circuit with a red jalapeño salsa made from his grandmother Emma’s recipe. His big break came through the 2018 H-E-B Quest for Texas Best competition, which invites locally owned food, beverage, and sundry companies to submit products for consideration to be sold in H-E-B stores. “There were around seven hundred competitors and about sixty percent were salsa entries. I was the only salsa to make it into the top twenty-five,” he says.

That moment in the sun spurred interest from other retailers, and Perez Ollervidez was savvy and prepared enough to capitalize on the attention. Eschewing an exclusive H-E-B deal, he says, “I learned the game of getting into supermarkets and how to go nationwide.” Since then, he’s braved the highs and lows of the scaling-up process and Tío Pelon’s has grown dramatically, going from being sold in fewer than one hundred stores in 2019 to more than nine hundred in 2021, including Central Market, Randalls, Albertsons, Whole Foods, Tom Thumb, and United Supermarkets locations.

On the flip side, an H-E-B deal gone bad can be a heartbreaker, as Brenda Craig, the owner of Texas Brew Products, explains in a note to forlorn fans of her now-defunct sauces. “It’s with a heavy heart that I announce that most of our wonderful products have been discontinued by H-E-B. We signed a five-year exclusivity agreement with H-E-B in an attempt to grow our business. That agreement prohibits use from selling our products anywhere else including online. About a year after signing that agreement H-E-B informed us they were discontinuing all of our product line except three items …”

Similarly, the Mendiolas worked their day jobs for more than five years while keeping Dom’s Chop Salsa in business with an exclusive H-E-B deal. When COVID hit and H-E-B cut them loose, it really hurt. “We were in that middle area where we couldn’t take advantage of others reaching out over the years, so losing them opened us up to issues,” Mendiola says.

When queried its about exclusivity clauses, H-E-B provided a statement: “H-E-B believes that sourcing unique, local products and supporting Texas businesses encourages innovation and creates opportunity throughout our communities. H-E-B has many programs to help local entrepreneurs, and we proudly work with thousands of small businesses across the state to help advance ideas and share the many diverse flavors the Lone Star State has to offer.”

Today, Dom’s Chop is about seven years old—a ripe old age that Mendiola says surpasses that of most food-manufacturing businesses by three or four years. He also says his company is at a crossroads: not failed, but certainly stalled. He’s still making enough salsa to provide for his die-hard customer base via online sales and a handful of small stores. But his goal now is to develop a partnership with someone who has the expertise (and time) to get the product into other retailers that want to make the most of the company’s longevity and the devoted fans eager to get their hands on some Dom’s Chop. “You get to a point in the ‘making it’ where the two ends of the spectrum are being all in or cutting it away. In the middle, you realize you can’t do it all on your own,” he says.

In other words, he won’t give up without going toe-to-toe with failure—a philosophy that gets to the heart of all true salsa hustlers.

The capacity to figure out how to survive on tiny margins is also a common denominator. Traci Bourque Johannson, cofounder of Katy-based 3 Sons Foods, says when people in the food business find out that the margins for her creamy cilantro salsa “are like twenty percent, they look at me like I have three heads.”

In the consumer packaged goods industry, the ideal gross margin is at least 40 percent—far above what most salsa makers can muster. Mendiola says that even though Dom’s Chop was grossing $300,000–$500,000 across more than two hundred H-E-B stores at one point, his profits were nowhere near that. “What we made in a year doesn’t pay a salary. You have to be thinking national and multiple stores—a few thousand stores—before those pennies on the margins add up and you can have a marketing budget, hire someone, or pay yourself a little bit.”

Johannson says of margins, “I don’t mind that they are low, but we do have to sell more product.” Luckily for her, the hard sell is one of her strong suits. When 3 Sons was just getting started, she knocked on countless doors, even persuading a neighborhood Ace Hardware to give her Diablo Verde salsa a shot. So far, she and her sons have sales-pitched their way into more than five hundred stores and numerous retailers including Walmart.com and Southeast-oriented Publix, among others. Last year, the company sold about 270,000 jars of sauce, and it is expanding the product line, recently launching a vegan version.

In contrast, Myron Callier, owner of Plano’s The Plain Ole Salsa Company, sells around 250 jars of salsa each week for $9 a pop and much better margins at local farmers’ markets. “I’d like to grow the business, but I don’t want to chase grocery store contracts until I can fulfill their orders,” he says. Though he continues to get offers from grocery store and hotel chains after winning a big salsa competition several years ago, the scaling up process for his smoked veggie salsa is prohibitive in the near term.

To that end, Callier has designed a facility he aims to build in the next few years that will allow him to keep up with demand. In the meantime, he says, “It’s the most fun I’ve had in my career. None of it feels like work, even though I am working harder than ever.”

That near-googly-eyed love of the job is a sentiment shared by many salsa hustlers. Johannson says, “You’re going to work twelve hours a day and your hands will be burned and you won’t be able to open a jar for the rest of your life. You have to do it because you love it and you’re driven to do it.” She’s motivated by her philanthropic goals including rhinoceros and wolf conservation, she says.

Even Mendiola, who’s seen the highest highs and most disappointing lows, says he’d do it all again. “There’s no two ways about it. Even with these down times coming out of COVID, I love this and I love my salsa and what we’ve built.”