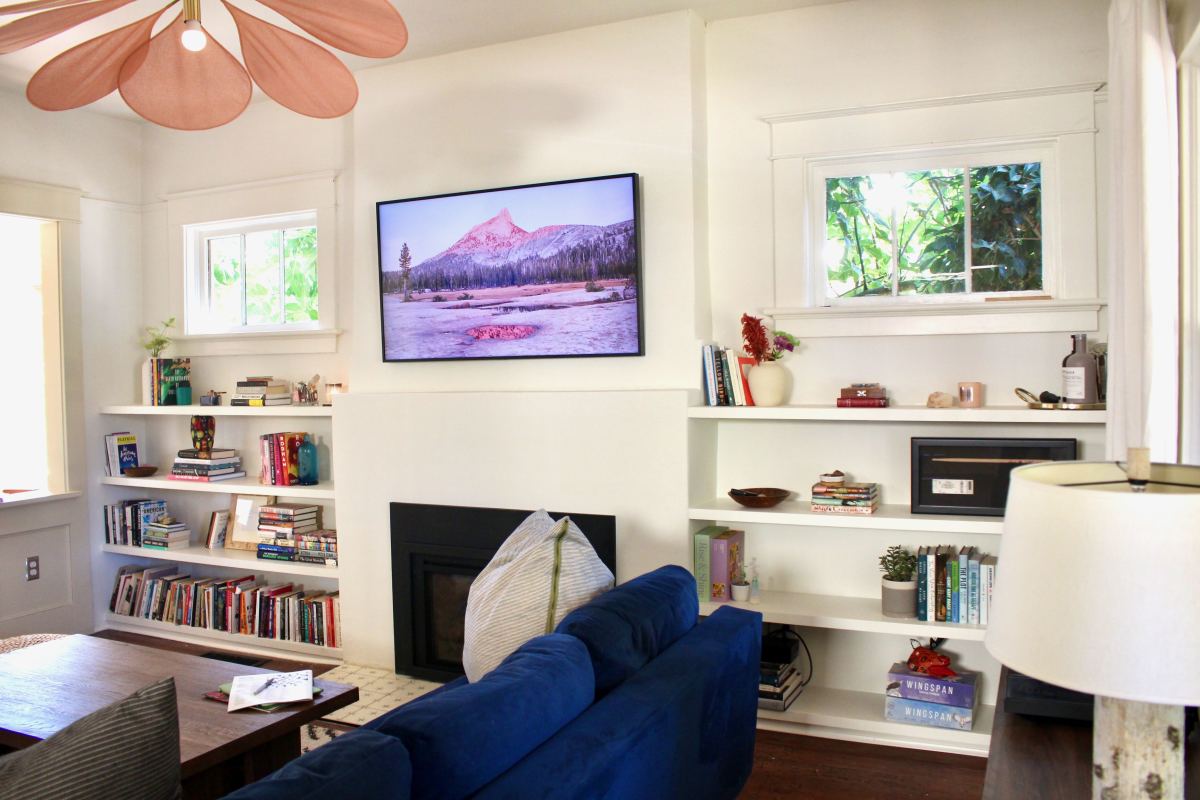 I knew our house was ours the moment we walked into it—which is really saying something, considering it was the eighth house we put an offer on and maybe the billionth I’d scrolled through on Zillow?? Something about it just felt right, and the moment we learned it was ours, my mind immediately went to the living room fireplace. I’ve always wanted a fireplace, so much so that it was one of two requirements I wasn’t willing to compromise on when house-hunting (the other being a porch). There were just a few problems before I could truly see myself enjoying the space, both from a practical and aesthetic standpoint:

At the time we moved in, the brick fireplace was framed by a bookshelf on the left and a bench on the right, neither of which were original to the house. We quickly realized that one side of the bookshelf was inexplicably half the depth of the other side, and didn’t fit anything beside really small books. As charming as the bench was, it was ultimately wasted space—I never opted to sit there over the couch. Plus, the mantle felt too traditional for my style, and was also awkwardly high for the television. Finally, the fireplace itself had to be fixed before it was functional.

While we worked with a contractor on the majority of the fireplace renovation, we tried to do as much as possible on our own. The first thing Jonah and I did was smooth the spiky orange peel walls down, in a process that was simple but consumed an entire weekend: We sanded the high-points down, then added a skim-coat layer, and repeated until they were smooth, then dusted and dusted some more (as you can see from the picture above, our living room looked like a bomb went off). Finally, we painted the walls and ceiling Benjamin Moore White Dove in an Eggshell finish, a change that helped the room look so much prettier and brighter immediately.

From there, we based the majority of our renovation off of this inspiration photo I found on Pinterest, while being mindful of budget. Here are the changes we made:

While we still have a few small details to add, like a teak frame around the TV and a light that will extend over the right-side shelves, I couldn’t be more thrilled with the final product. I’ve literally been waking up each morning, excited to start my day with a cup of coffee on the couch, and love having such a beautiful home for all of our books. It’s exactly the room I imagined it would be when I walked into it almost a year ago, and I’m so grateful to call it my home.