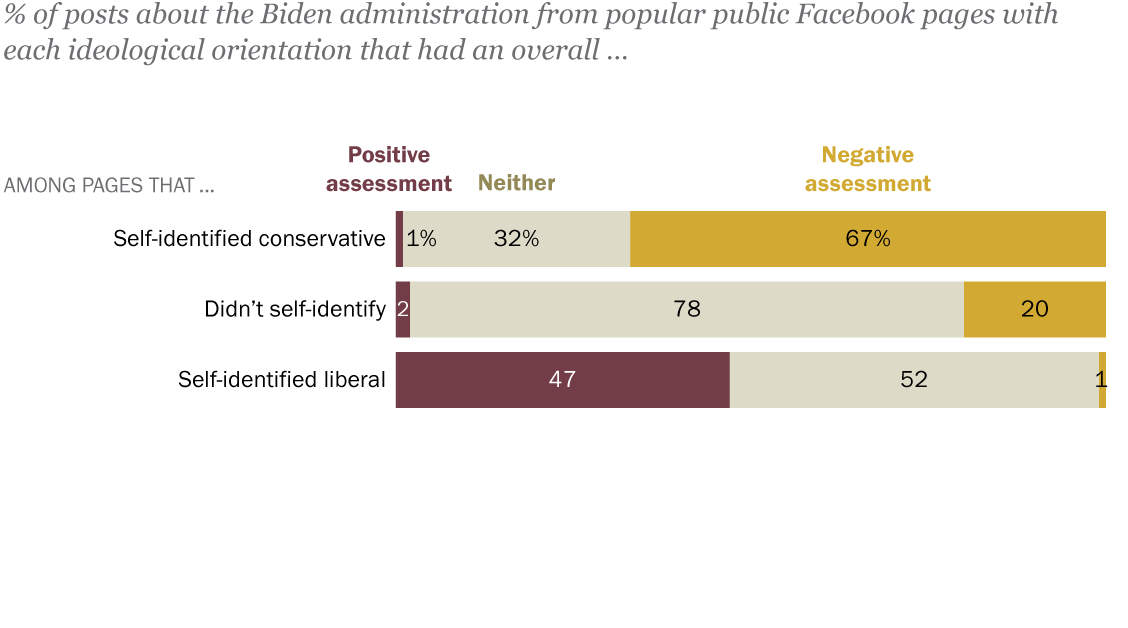 This study analyzes Facebook posts about the Biden administration on the most popular public Facebook pages in the time period studied that focus on current affairs. With about a third of U.S. adults (36%) regularly getting news on Facebook, more than other social media platforms, this analysis tries to get a sense of the coverage of the Biden administration in this space.

Popular public Facebook pages were selected through a multistep process using data from CrowdTangle, a public insights tool owned and operated by Facebook. All public pages in the CrowdTangle database that posted at least once about the Biden administration in the first three months of 2021 were considered, so long as those posts received at least one view from Facebook users. A total of roughly 11,510 pages included at least one such post.

Researchers calculated the total monthly interactions for each of these pages from October to December 2020 and further examined the 100 pages with the highest average monthly total interactions during this time period (which is the same period analyzed in recent research looking at news coverage on other platforms). Researchers then examined each page and removed pages that were based outside the United States, were already studied in the most recent report about news coverage, or did not have a clear current affairs focus.

The top 25 remaining pages by average total monthly interactions were included in the study, and researchers downloaded all 5,458 posts published by these pages from March 8-14, 2021, using CrowdTangle. Each post was analyzed by trained human coders to determine if it was about the Biden administration. Only the post message and embedded image, link headline and image, and the first 10 minutes of any video embedded in the post were used to make this determination. A total of 1,226 posts met these criteria and formed the basis of this study.

For more information, see the methodology.

A new study of posts on popular public Facebook pages about the early days of the Biden administration finds that the focus of these posts, as well as the assessments of the new president, differed widely by the ideological orientation of the pages.

This analysis – which follows a recent Pew Research Center report examining a broader sample of 25 major news outlets on TV, radio and the web – focuses on the 1,226 posts published on 25 popular public Facebook pages focused on current affairs (based on average total monthly interactions) during a crucial week for President Joe Biden, March 8-14, in which he signed the $1.9 trillion coronavirus relief bill. (The Center also fielded a survey that week about Americans’ views of news about the new administration.) With about one-in-five U.S. adults (18%) saying they often get political news on social media, this latest research explores how news coverage on social media may have differed from broader coverage of the new administration.

The popular pages included all have a focus on current affairs and are a mix of political groups like Occupy Democrats or Team Trump; figures such as Barack Obama or Donald Trump Jr.; commentators like Ben Shapiro or Robert Reich; and news outlets like The Western Journal and NowThis.

Among popular Facebook pages that describe themselves as conservative (12 of the 25 pages studied), 1% of posts carried positive assessments of the Biden administration, while 67% were negative. For those pages that self-identified as liberal (11 of the 25), only 1% of the posts carried negative assessments while 47% had a positive one. About one-third (32%) of the posts on conservative Facebook pages and roughly half (52%) on liberal pages were neither positive nor negative.

These differences in assessments follow the same pattern found in the broader news media study and are another reminder of the deeply polarized information environment in the country. (It is important to note that while the ideological groupings for the Facebook pages were based on self-descriptions, the groupings in the broader study were based on audience makeup – a metric not available for Facebook pages.)

There were also clear differences by self-described ideology in the topics these pages posted about. Even with the enactment of the coronavirus relief bill, the leading topic on conservative Facebook pages during the week studied was immigration, which accounted for 32% of all posts on these pages – well ahead of the economy, at 12%. On liberal pages, however, the economy dominated, accounting for just under half of their posts (46%). In stark contrast to the conservative pages, only 2% of posts on liberal pages were about immigration. (Only two of these 25 pages did not self-identify with an ideology, and so we do not focus on their results here.)

This report also compares Facebook posts about the Biden administration with coverage in the broader mix of outlets studied in our previous report. Both samples analyzed here include only posts or stories from the week of March 8-14, 2021. The outlets studied in the previous research include 25 major news outlets on TV, radio and the web; Facebook pages of these outlets were not included in this analysis. These two samples covered the new administration using the same mix of topics but carried a more negative assessment on Facebook.

The two samples did differ, however, in the overall assessments they offered of the Biden administration. On popular Facebook pages, posts with negative assessments outnumbered positive ones by 36% to 21%. But in the broader coverage of Biden, it was almost an even split, with 31% of stories offering a positive assessment compared with 28% carrying a negative one. A plurality of coverage in both groups offered neither a positive nor negative assessment. One contributing factor to this difference in coverage may be the self-described ideological orientation of the 25 popular Facebook pages studied compared with the political leaning of audiences across the 25 news outlets in the broader coverage. For the 25 Facebook pages, self-identifications were almost equally divided between conservative (12) and liberal (11), while in the broader analysis, there were far more news outlets with audiences that lean to the left politically (13) than with audiences that lean to the right (6), which reflects the lower levels of trust of many major outlets among Republicans.

Of the 25 popular current affairs-oriented public Facebook pages examined in this report, nearly all gave some indication of an ideological orientation. Pages that identified as liberal described themselves as liberal, progressive, Democratic, or opposed to conservativism or Republicans, while pages that identified as conservative described themselves as conservative, Republican, or opposed to liberalism or Democrats. Researchers used these descriptions to classify the ideology of the page as liberal, conservative, or neither.

In all, 11 of the 25 pages self-described as liberal and 12 as conservative. Just two pages did not describe themselves as favoring one side of the political spectrum; these were classified as “didn’t self-identify” and are less of a focus of this analysis.

The most dramatic difference between posts from the two ideologically different groups of Facebook pages is in their overall assessment of the Biden administration. In the self-described liberal pages, about half of the posts carried neither a positive nor negative assessment of the new administration (52%) or a positive one (47%) during the week studied (March 8-14, 2021). A mere 1% featured a negative assessment.

Popular liberal and conservative pages also focused most of their attention on different topics related to the Biden presidency. By far, the dominant topic of the posts on the liberal pages was the economy (46% of all posts on liberal pages), likely reflecting Biden’s signing of the $1.9 trillion coronavirus relief bill during the week studied. The next most common topic among liberal pages was health care, well behind at 16% of posts. No other topic was the focus of more than one-in-ten posts.

In contrast, the leading topic in posts from conservative pages was immigration (32% of posts there), with interest likely fueled by the buildup of migrants at the U.S. southern border during the early days of the Biden presidency. The economy was the focus about a quarter as often (12%) as on liberal pages and was discussed at roughly the same rate as three other topics: health care (9%), political skills (9%) and the news media (8%).

There is an even starker difference between the two types of Facebook pages on one of the biggest issues of the day: the coronavirus pandemic. In addition to whether COVID-19 was the main topic of a post, researchers also analyzed whether COVID-19 was mentioned in the text of the post or in the link or video contained in the post. Roughly two-thirds of posts (68%) from liberal pages mentioned the coronavirus – more than twice the proportion as conservative pages (28%). There was a smaller difference in mentions of former President Donald Trump in posts. Conservative pages were somewhat less likely to mention Trump, who appeared in 15% of their posts, compared with 22% of posts on liberal pages.

Facebook posts and broader news coverage about early Biden days are similar on topic, less so on tone

This report also examines how Facebook posts about the new Biden administration compare with the stories examined in a recent Pew Research Center analysis of coverage of the administration by 25 news outlets drawn from television, radio and the web. To make as effective a comparison as possible, data from the previous analysis, which spanned the first 60 days of the new administration, were reanalyzed to include only the week of March 8-14, the same period in which these Facebook posts were studied. Coverage from this broader sample encompassed TV, radio and web stories from a wide range of sources from CNN to Newsmax and from The New York Times to the Washington Examiner.

Looking at the overall figures for that week (rather than ideology, which was assessed differently in these two samples), Facebook posts and broader coverage focused on the same topics at about the same rates, but there was a moderate difference between the tone of the stories from the earlier study and the social media posts.

The most common topic in each analysis was the economy – which was the focus of 28% of all the Facebook posts studied, modestly less than the 36% of stories in the broader media sample that were devoted to that subject. And the ranking of topics was similar as well, with the economy at the top spot followed by a mix of health care, immigration, political skills and appointments, although there was greater emphasis on immigration among the Facebook posts.

The overall assessment of the new administration varied noticeably between the two groups.

For both posts and stories, however, a plurality of coverage was neither negative nor positive (44% of posts and 41% of stories).

Among all the Facebook posts studied, those with a positive assessment of the president or his administration received an average of about 13,800 interactions per post, 29% higher than the about 10,700 average interactions generated by posts with a negative assessment. This stands in contrast to previous Center research that found that negative YouTube videos and oppositional Facebook posts from members of Congress typically generated higher levels of engagement.

Comparing these popular Facebook pages by their self-described ideology, liberal pages, which also published far more positive posts about the administration, generated somewhat higher engagement per post than conservative pages. On average, posts about the administration in the week studied received roughly 12,500 interactions on liberal pages, about 11% more than posts from conservative pages (about 11,300).

Mentions of Donald Trump in a post proved to be a major catalyst for engagement. Posts that did not mention Trump, on average, generated roughly 9,200 interactions, while those that included the former president had more than double that number – about 19,800.

Popular pages frequently linked to their own external content

Many of these posts – especially on the conservative pages – linked to their own content rather than to content from another website (e.g., a post on the Pew Research Center Facebook page posting a link to pewresearch.org vs. another site). Overall, four-in-ten posts (40%) linked to their own content; this number rose to 72% for posts on conservative pages but was just 4% for posts on liberal pages.